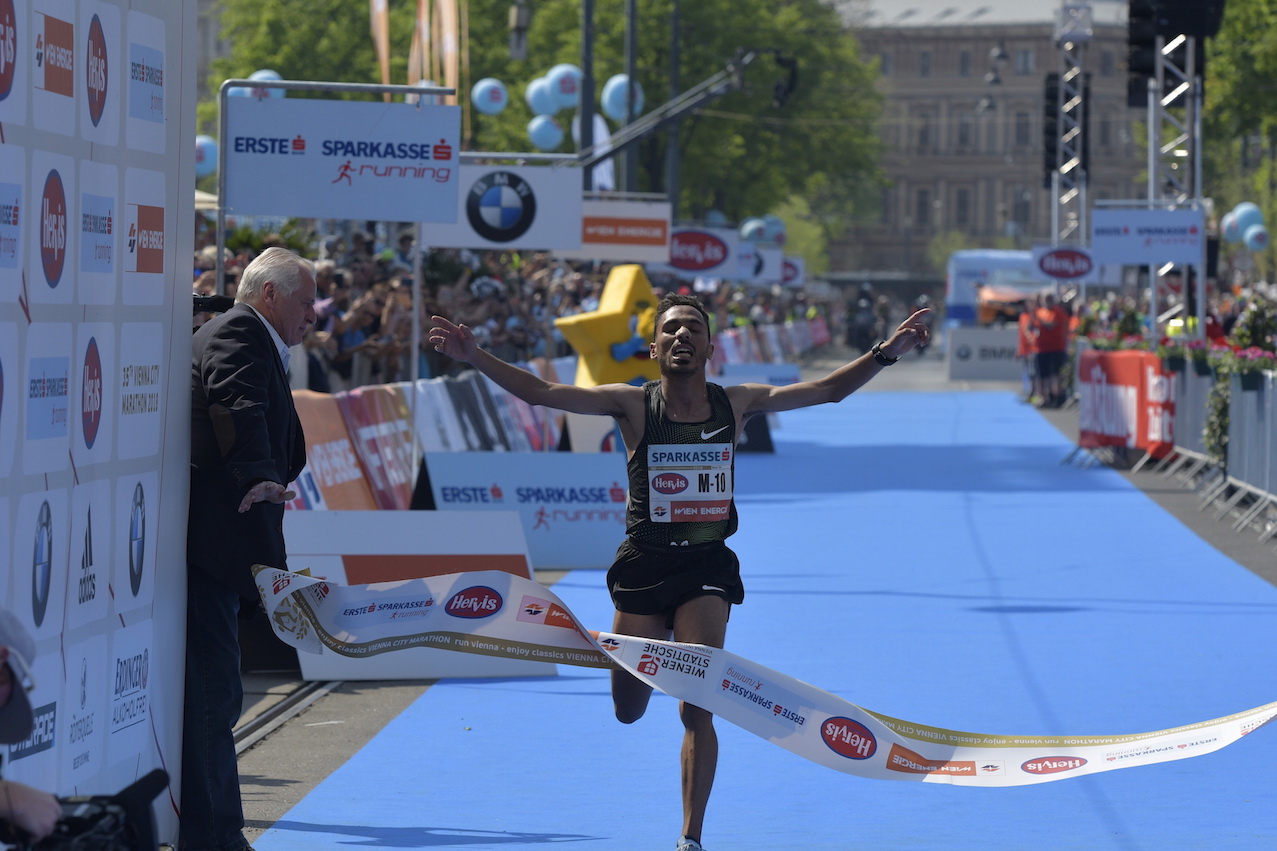 Nancy Kiprop defended her title with a time of 2:24:18, a personal best by two seconds. It was only in the final part of the race, when the Kenyan slowed and missed breaking the course record of 2:23:47. Ethiopia’s Melesech Tsegaye and Celestine Chepchirchir of Kenya followed with 2:29:51 and 2:30:39 in second and third respectively.

Adding running events staged parallel to the marathon and on Saturday a total of 41,919 athletes from 130 nations entered the 35th edition of the Vienna City Marathon. 8,300 of them competed over the classic distance of 42.195 k. The Vienna City Marathon is Austria’s biggest sporting event and an IAAF Gold Label Road Race.

Another major international marathon experienced extreme weather conditions which hampered performances. In contrast to Boston, it was not cold and wet in Vienna but hot and sunny. A number of elite athletes dropped out of the race, among them the fastest man and woman on the start list – Dennis Kimetto and Helen Tola.

With temperatures just below 20 Celsius at the start the leading group tried to maintain the scheduled pace as long as possible. The goal had been a time between 2:07 and 2:08. However with the temperature very soon going up to well over 20 Celsius the pace slowed. A 10 k split of 30:25 was followed by a half marathon time of 64:39. Seven runners formed the first group, running behind three pacemakers.

The fastest man on the start list, Dennis Kimetto, had already been running at the back of the group around the 15 k mark, but he was right in the middle of it a little later. However the world record holder, who only finished two more marathons after running 2:02:57 in Berlin in 2014, lost contact at around 22 k. Soon a big gap opened and Kimetto was limping. A muscle problem in his left calf forced him to stop before the 25 k mark.

After the last pacemaker Noah Kigen dropped back at 30 k (1:31:50) – he continued to finish fifth – Ishmael Bushendich took the initiative. He left behind all but one rival: Salaheddine Bounasser followed the Kenyan before he stormed away with two miles to go. “I got stitches, so I could not respond,“ said Bushendich.

27-year-old Bounasser had not been regarded as one of the big favourites, but he ran impressively in the heat. Entered with a PB of 2:10:04 Bounasser improved this time by 35 seconds. „I thought I had a chance to get into the top three, but not to win“ said the Moroccan.

The women’s leading group was going for the 18-year-old course record of 2:23:47, set by Italy’s Maura Viceconte. And it looked very promising for much of the race. However after a 10 k split of 33:54 and then 50:40 for 15k it was the fastest woman on start list who could not keep up: Ethiopia’s Helen Tola dropped back shortly before 20 k and then stopped before 30.

Three runners – Nancy Kiprop, Celestine Chepchirchir, and Fatuma Sado – were in the lead at halfway, which they reached in 1:11:47. Ethiopia’s Sado was then dropped shortly before the 25 k mark. The two Kenyans were running together for the next 5 k section and passed 30k in 1:41:29, which pointed to a finishing time of 2:22:45. But then Chepchirchir faltered and Kiprop, running all on her own, could not keep up the pace. „I am happy to have won again in Vienna. Unfortunately, it was too hot to break the course record,“ said 38-year-old Nancy Kiprop.

With a time of 2:24:18 Nancy Kiprop ran the second fastest time ever in the history of the Vienna City Marathon. And she was more than five minutes ahead of Melesech Tsegaye who snatched second place from Celestine Chepchirchir in the final kilometre.