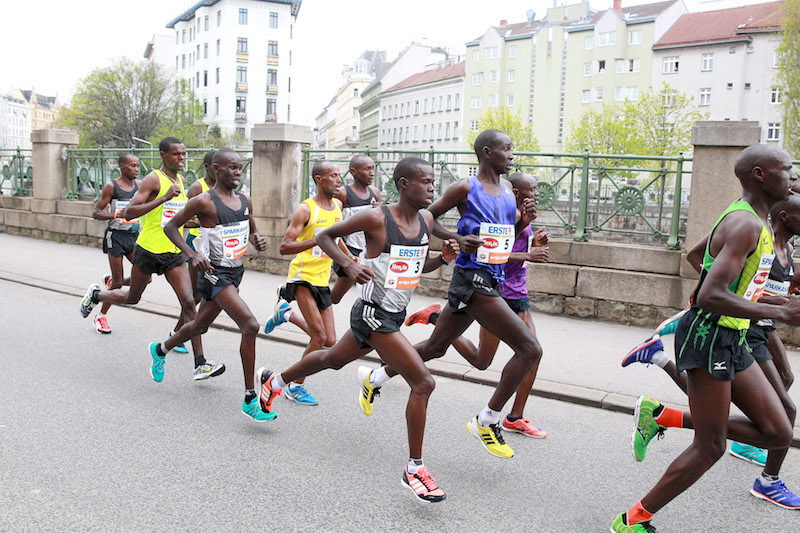 Both course records could be attacked at the Vienna City Marathon on 23rd April. With deeper elite fields than in recent editions organisers hope to see fast winning times. Current course records stand at 2:05:41 and 2:23:47. With personal bests of 2:05:21 and 2:23:26 Kenya’s Eliud Kiptanui and Meseret Mengistu of Ethiopia are the fastest athletes on the start list. Around 9,000 runners have entered the 34th edition of the Vienna City Marathon, which is an IAAF Gold Label Road Race. Adding other running events staged parallel to the marathon a total of more than 42,000 athletes have so far been registered. The Vienna City Marathon is Austria’s biggest sporting event. Late registration is only available for accompanying races on Saturday (22nd April), namely the new Vienna 10K race and kids runs. Information is available at: www.vienna-marathon.com

Eight runners with personal bests of sub 2:09 are currently on the men’s elite start list. Two of them have run under 2:06: Eliud Kiptanui clocked 2:05:21 in Berlin two years ago while Ethiopia’s Deribe Robi ran 2:05:58 in Eindhoven in 2015. Five more athletes feature personal records between 2:09 and 2:11. Among them is Vincent Kipchumba, also known as Vincent Toroitich, who ran a fine race at the Berlin Half Marathon recently. The Kenyan was entered as a pacemaker into the Berlin race but continued after his duties and finished with a PB of 60:32 in second position. A debutant could produce a surprise as well: Uganda’s Geoffrey Kusuro features a fine half marathon PB of 59:43.

While Getu Feleke of Ethiopia established the course record of 2:05:41 three years ago the women’s mark is much older. Maura Viceconte clocked 2:23:47 back in 2000. The record of the Italian has been targeted a number of times in the past editions of the Vienna City Marathon but somehow always survived. This year’s elite race start list suggests that the mark could finally go.

Half a dozen women have been entered who have already run under 2:26:30. Meseret Mengistu is the fastest on the start list: Two years ago the Ethiopian won the Paris Marathon with 2:23:26. „In better weather conditions I could have run 2:22 today,“ said Shuko Genemo, when she took the Vienna City Marathon a year ago in very windy conditions. The Ethiopian clocked her PB of 2:24:31 in that race and now returns to Vienna as the defending champion. Running her debut Angela Tanui looks to have the potential to make an immediate impact over the classic distance. The Kenyan ran five half marathons in a row with sub 70 minutes’ results. While her personal record stands at 67:16 from 2016 she recently was second in the Rome Ostia race with 67:43.