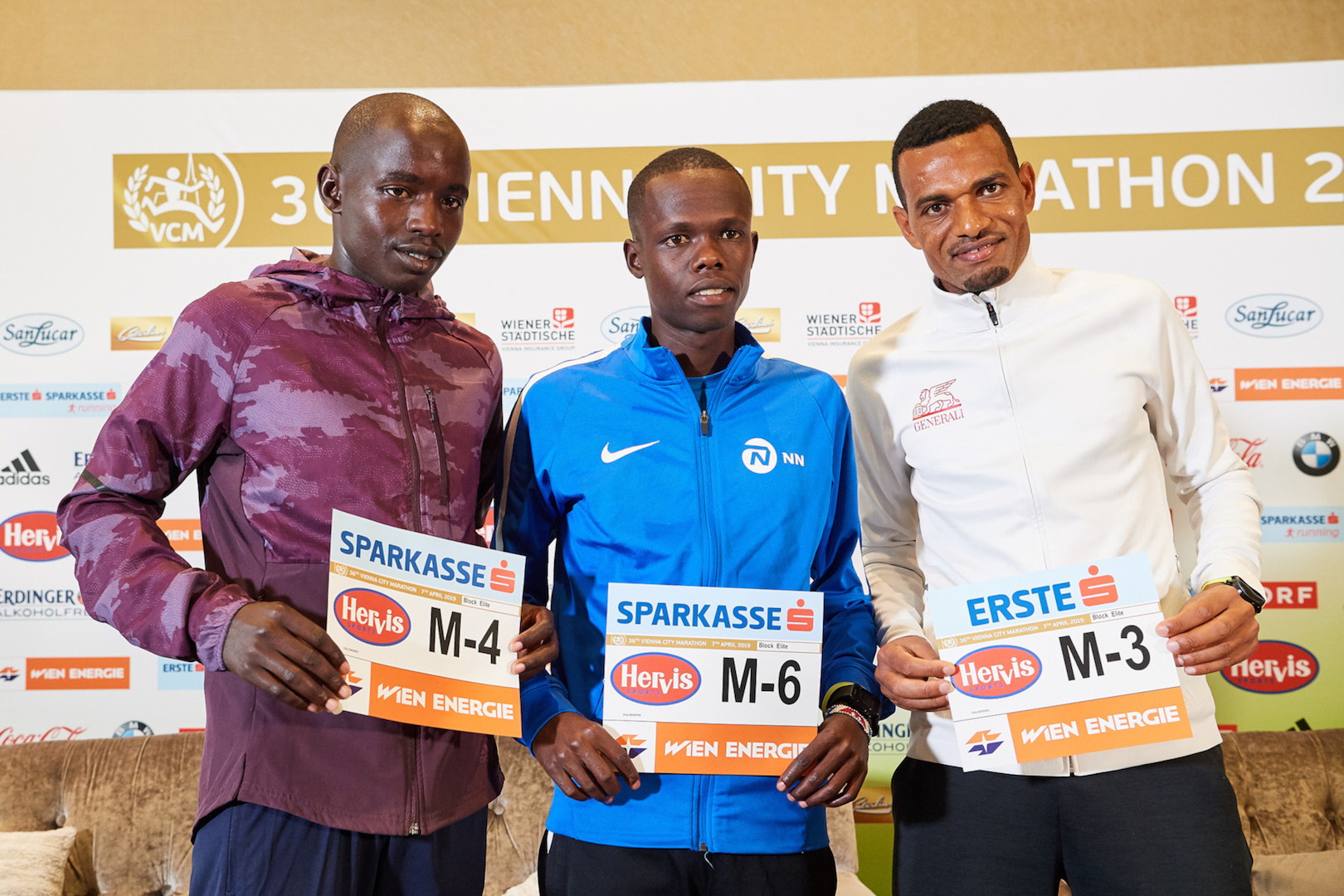 Last year’s European silver medallist, whose personal best is 2:06:40 when finishing fourth in Seoul in 2016, has recovered from his disappointment at finishing tenth in Dubai in January in 2:09:50. He is likely to be joined in the chase for fast times and podium places by Kenya’s Robert Chemosin, the 2016 Vienna champion. His best is 2:08:05 but Chemosin believes he has learned much from his training group leader, the world record holder Eliud Kipchoge and is ready to rise to another level. Also in contention should be his compatriot Kenneth Keter after a 2:07:34 debut marathon last October. The Vienna City Marathon is an IAAF Gold Label Road Race, the highest category awarded in road racing.

Tadesse Abraham didn’t waste words in setting out the goals in his running life. Fresh after arriving from his training base in Ethiopia the same morning, he told at the press conference that he had two short term goals: break the European record and qualify for the Olympic Marathon in Tokyo next year, with the overall target of “fulfilling my potential”.

Such straight talking didn’t come across as arrogance. It was the case of a runner knowing what was required: “I always want to win a race, be the first to break the tape. It’s a great feeling and that will be my goal on Sunday.”

As a man who finished seventh in the Olympic Marathon in Rio in 2016, Tadesse has proven his competitive mettle at the highest level. He had planned to attack Mo Farah’s European record of 2:05:11, achieved when the Briton won the Chicago title last October, in Dubai this January. That pursuit ended with tenth place in 2:09:50, far from threatening the Briton’s performance.

His best is currently 2:06:40 from fourth place in Seoul in 2016. Twinned with the target of the European record is his quest to run in the Tokyo Olympic Marathon. The qualifying time set by the IAAF is 2:11:30 and he has already achieved this within the time frame of January 1, 2019 to May 31, 2020. By the nature of the marathon’s demands, opportunities are few: “If I run the World Championships [this year in Doha, late September and October] I have just two chances to run a fast marathon, spring this year and next. I decided on Vienna, it’s the heart of Europe, German-speaking and fans can experience the race live,” explained Tadesse.

Tadesse Abraham became a Swiss citizen in 2014 but keeps in regular telephone contact with relatives in Eritrea. His brother also lives in Switzerland, specialising in another form of long-distance activity as a lorry driver.

Sitting alongside on the press conference sofa were the Kenyans Robert Chemosin and Kenneth Keter. They also demonstrated their resolve to be up with the best on Sunday. Chemosin won the Vienna City Marathon in 2016 and has been part of Eliud Kipchoge’s training group for the past year. He believes his best of 2:08:05 in winning Warsaw in 2015 can be radically improved, chiefly thanks to the influence of Kipchoge the marathon world record holder: “I’ve acquired skills in training with him, developing tactics and I need to use them to compete here. We are so happy being able to train with Eliud.”

Kenneth Keter took a leap into the unknown on his marathon debut in Frankfurt last October but his faith was rewarded with fifth place and 2:07:34. Confident after his preparation in Iten, he believes he can move to yet another level: “I think I am in better shape than before Frankfurt. I was wanting to break 2:08 there and feared it would be tough but now I feel more comfortable about the marathon.”

The Vienna fans are renowned for their enthusiastic support and will have every reason to cheer their own “VCM Team Austria”. The latter reflects the impressive strength in depth of the squad, led by Lemawork Ketema (2:13:22) and Peter Herzog (2:15:29), European marathon team bronze medallists in Berlin last year, plus Valentin Pfeil (2:14:50). The Race Director of the Vienna City Marathon, Wolfgang Konrad, looked forward to their further development: “The VCM Team Austria is a showcase for the top Austrian runners where we have unprecedented strength in depth, giving them a stage in front of their own public. The aim is to be a motivator and focus for the runners and the general public.”