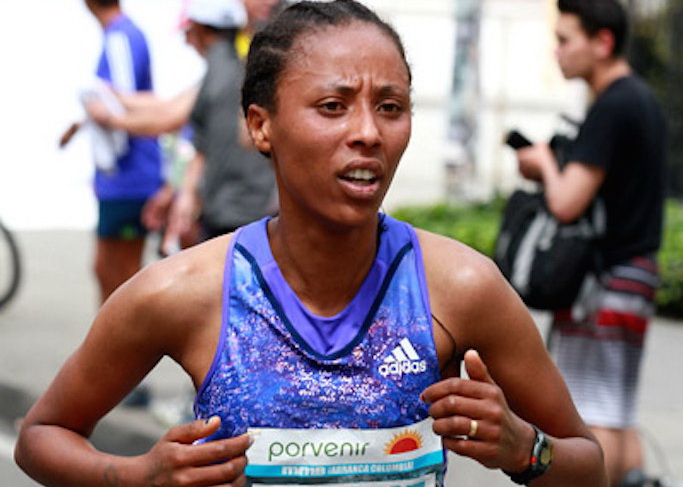 Half a dozen of experienced marathon runners with personal bests in the 2:23 to 2:27 region plus two more or less newcomers to the distance form part of the women’s elite field of the Vienna City Marathon on 10th April. Ethiopia’s Guteni Shone is the fastest on the current start list with a personal record of 2:23:32. Including other running events staged parallel to the marathon organisers of this IAAF Gold Label Road Race expect more than 40,000 entries.

While times of the men’s winners of recent editions have been top-class the women could often not quite live up to expectations. Only twice were there winning times of sub 2:25 in the past ten years. And the 2:23:47 course record of Italy’s Maura Viceconte dates back to 2000. This year organisers hope to see times of at least sub 2:25 again.

Guteni Shone knows how to run such times. She clocked her personal best of 2:23:32 in the 2015 Houston Marathon in which she finished runner-up. The 24 year-old Ethiopian then took the Seoul Marathon just two months later, running 2:26:22. Second in Rotterdam in 2014 Shone also has a fine half marathon record of 68:31.

While Namibia’s Helaria Johannes is the second fastest woman on the start list with a PB of 2:26:09 two Ethiopians intend to run a sub 2:25 pace on 10th April: Fantu Jimma and Meseret Kitata. 28 year-old Jimma has run sub 2:30 half a dozen times and her personal best stands at 2:26:14 from Dubai 2014. It was earlier this year, when she came relatively close to that. Jimma was third in Xiamen in January with 2:26:53. In contrast to Jimma 22 year-old youngster Kitata has already won a major international marathon. A year ago she took the Rome Marathon. She clocked 2:30:25 in rainy conditions on some slippery roads. Later that year Kitata improved her personal best to 2:27:17 with a fifth place in Frankfurt. Shuko Genemo aims to further improve when she comes to Vienna. The Ethiopian clocked 2:27:29 when finishing third in Hengshui (China) last year. In January she won the Mumbai Marathon with 2:27:50. Another runner with a sub 2:28 personal best is China’s Jia Chaofeng. She clocked 2:27:40 when winning the Beijing Marathon in 2012.

Two other women have the potential to produce a surprise in Vienna. Ethiopia’s Ruti Aga has shown very promising form this year: First she clocked a personal best of 68:07 in the Houston half marathon, finishing fourth in January. Then she took the Lisbon Half Marathon last Sunday with 69:16. While the Ethiopian will run her marathon debut in Vienna Kenya’s Doris Changeywo had a first marathon experience last December. She won the Singapore Marathon in 2:44:26. While it was a great debut win the time run in humid conditions does not reflect her potential. Changeywo features fine personal bests of 31:26 for 10 k and 68:49 for the half marathon.