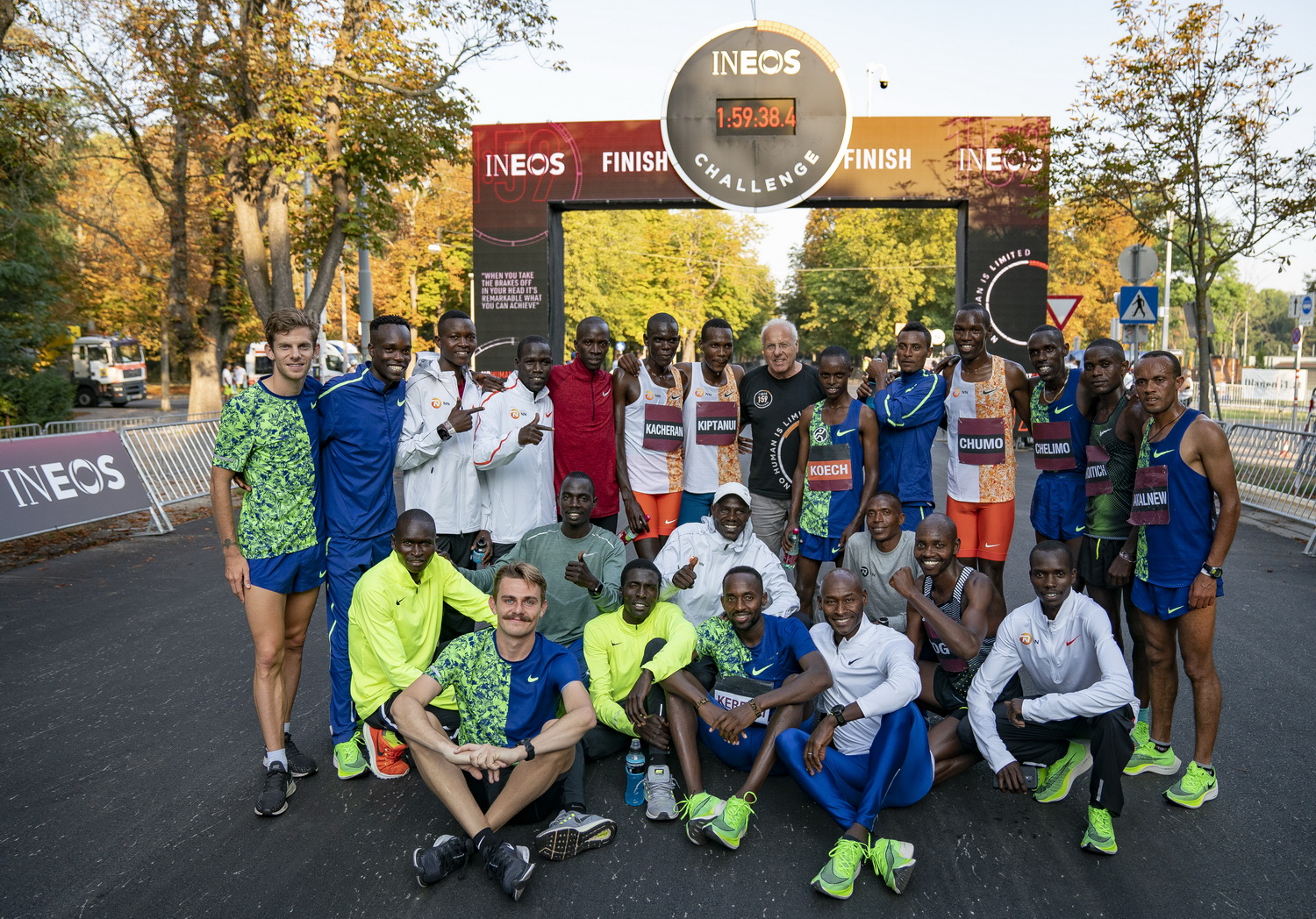 Eliud Kipchoge, the greatest marathon runner of all time, the reigning world and Olympic champion and the current marathon world record holder (two-hours, one-minute and 39 seconds), will bid to become the first human ever to run a sub-two-hour marathon on Saturday 12th October (with a window until 20th October in case of adverse weather conditions).

With Sept. 2nd marking 40 days to go until the INEOS 1:59 Challenge, the team tested elements such as the race management operations, athlete facilities, pacing plans, broadcast plans and timing systems. The aim was to ensure nothing is left to chance in the bid to give Kipchoge the best possible opportunity to make history next month.

Several pacemakers who will be pacing Kipchoge in the INEOS 1:59 Challenge were in attendance in Vienna this weekend, including the likes of 1500m and 5000m champion and Olympic medallist Bernard Lagat (USA), Melbourne Track Club stars Jack Rayner(AUS) and Brett Robinson (AUS) and 5000m Commonwealth Games champion Augustine Choge (KEN).

Kipchoge himself remained at his training camp in Kaptagat, Kenya where his build-up program to October is meticulously scheduled as he aims to show the world that no human is limited and break the historical barrier of the sub-two-hour marathon.

Reflecting on the weekend’s testing, TEAM INEOS CEO Fran Millar said: “This challenge is a huge undertaking to help one man make history. Doing something that has never been done before is not easy and a significant amount of work goes into that. We have had around 150 people ranging from our operational teams, broadcast teams, performance teams, timing teams, pacemakers and more come together this weekend for a series of tests to ensure nothing is left to chance when we come back to Vienna in just over 40 days.”

“On behalf of everyone at the INEOS 1:59 Challenge I also want to extend my thanks to the city and Mayor of Vienna. Everyone here has been so welcoming and helpful in supporting us achieve this goal and we can’t wait to try and make history here in October”.

Valentijn Trouw, athletes manager of Global Sports Communication, who was leading the pacemaker rehearsals over the weekend added “To bring together so many world-class athletes for a weekend of testing was very special. All the pacemakers involved in the Challenge who came to Vienna this weekend, and those who could not make it, are very excited and honoured to be part of this Challenge and to be given the opportunity to support Eliud in October to try and make history.

“For the pacemakers to even run 5KM or 10KM at the pace Eliud Kipchoge has to run a marathon in under two hours is not easy and they all had to work very hard. The good news is the pacemakers ran very well, the formations looked great and we took some key learnings from this weekend that we will look to perfect over the coming weeks as we look to continue to test and analyse several pacing formations before making any final decisions.”

INEOS 1:59 Challenge pacemaker Bernard Lagat said “The reason me and the other pacemakers were here this weekend was to test the course, the formations, the transitions and more. It was a great weekend and now we are sure that when Eliud steps to the starting line in October and looks into our eyes he is confident that we, as pacemakers, know exactly what we are doing and are ready to help”.

“When the call came to support Eliud achieve this amazing goal and make history I knew I had to be involved. I have known Eliud for a long time and it is a real privilege to have the opportunity to help him achieve his dreams”.

Gerhard Wehr, COO of Vienna City Marathon who is working with London Marathon Events as part of the local organising team added: “Organising a marathon event of this scale takes a lot of hard work and effective teamwork. We have had a very successful weekend of testing and have learnt a lot. We look forward to working closely with the INEOS 1:59 Challenge team to fine-tune the organisational aspects over the coming weeks and are excited to welcome thousands of fans to cheer on Eliud and support him in his attempt to make history on 12th October!”.