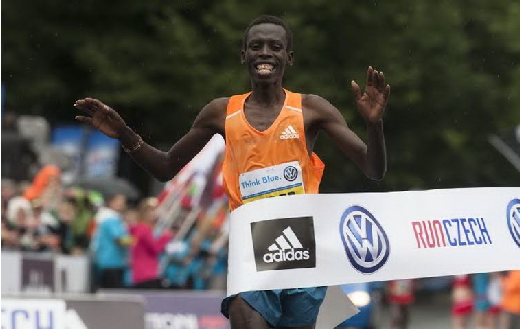 Twenty-seven-year-old Kenyan Peter Kirui, who owns a marathon personal best of 2:06:31, will be challenging defending Prague Marathon champion and countryman, Patrick Terer on May 3rd at the Volkswagen Prague Marathon.

Among his other rivals on May 3rd there will be another Kenyan in Evans Chebet who could play a major role in this race. The 26-year-old was second in the marathon last year, improving his best time by over three minutes to 2:08:17. He went even better than that in the Seoul Marathon in the autumn, running 2:07:46 for second place.

It’s a runner from Ethiopia who claims the distinction of having the fastest personal best among Prague’s elite field: Deribe Robi, who improved his time by more than a minute in Dubai this year to 2:06:06. That performance earned the 30-year-old a third place in the flat and fast desert marathon. Another strong Ethiopian is Teferi Kebede who ran his best time of 2:07:35 in the Tiberias Marathon in Israel in 2012.

The women’s competition has the makings of an all-Ethiopian contest. The organisers have announced the participation of three fast Ethiopian women who have already shown high quality form this year and run personal bests. Yebrgual Melese will arrive in Prague as the Houston Marathon champion from January, bringing her best time down to 2:23:23 with victory in the USA. A short time ago she was second in the Sportisimo Prague Half Marathon with a fine 68:21.

Tadelech Bekele ran even faster in Dubai in the same month with 2:22:51 which earned her seventh place in a race of great strength in depth. She has already won two RunCzech races: First she took the Mattoni Ceske Budejovice Half Marathon in 2012 with a course record of 70:54 that still stands. Then she won the Birell Prague Grand Prix 5 k in the same year.

Ashete Bekere, who improved to 2:23:43 and took tenth place in Dubai this January, already knows the Volkswagen Prague Marathon. She was third last year with a time of 2:28:04.

For more information online about the Volkswagen Prague Marathon, please go to www.runczech.com