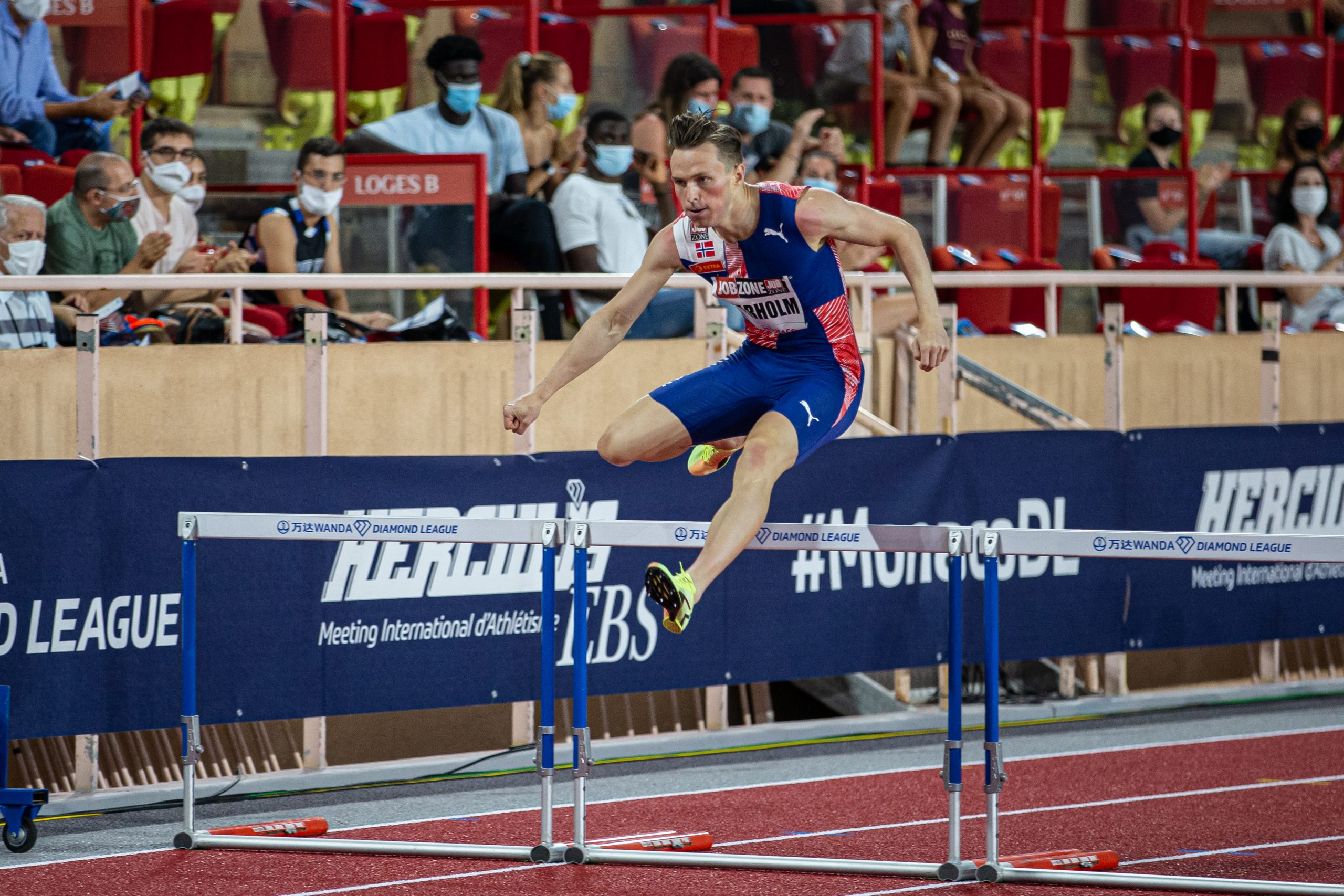 Make no mistake: the winner of the 400 m hurdles at the Meeting Herculis EBS in Monaco, on Friday 9 July, will be justified in setting off for the Tokyo Games with an ‘Olympic favourite’ status. Indeed, in what will be a season’s first, the event will form the backdrop for an unprecedented clash between the reigning world champion, Norwegian Karsten Warholm, and world number 1 this year, American Rai Benjamin. The two men have yet to cross swords in 2021, making their duel all the more enticing. Rai Benjamin created a real stir last week at the American selection meet contested in Eugene, by running 46’’83, the second best performance in history after the world record secured by his compatriot Kevin Young (46’’78). Karsten Warholm has not run the distance this season, but his comeback at the Oslo meeting on 4 June speaks volumes about his fitness levels since the Norwegian treated himself to a world best performance in the 300 m hurdles thanks to a time of 33’’26, which is over half a second faster than he ran it last year on the same track (33’’78). Up against them, poised to make the most of this highly charged atmosphere, the local organisers have invited Kyron McMaster (British Virgin Islands), the 2nd best performer in the world this year (47’’50), Alison Dos Santos (Brazil), 3rd in the world ranking 2021 (47’’57) and Wilfried Happio (France), European U23 champion in 2019.

The latest sensation in world sprinting is American. Trayvon Bromell, 25, has been on a long road to recovery after a saga of injuries (he left the track at the Rio Games 2016 in a wheelchair after the 4×100 m final), but has taken back ownership of the 100 m since the start of the season. He has every intention of holding onto it too, or at least until the Tokyo Games. Posting a time of 9’’77 in early June in Florida, the world best performance this year, he banged the point home by taking the win on 20 June in the final of the American Olympic selection meet (9’’80). In Monaco, on Friday 9 July, he will be vying with compatriot Fred Kerley, 3rd in the American selection in 9’’86 (personal best), Canadian André de Grasse (9’’99 this season), Italian Lamont Marcell Jacobs (9’’95 in 2021) and Frenchman Jimmy Vicaut (10’’17 this season, 9’’86 in 2015).

Explosive. The women’s 200 m at the Meeting Herculis EBS in Monaco is shaping up to be one of the most exciting events of the night and maybe even the season as a whole. For the very first time, it will pit two massive favourites for the Tokyo Games against one another. On the one hand, Jamaican Shelly-Ann Fraser-Pryce, 34, victorious in the Olympic selection meet with a time of 21’’79, her personal best. On the other, American Gabrielle Thomas, ten years her junior, who has been the world’s new star of women’s sprinting since her victory in the Olympic selection meet in 21’’61, the third fastest time in history. The public in the Louis II Stadium will have to wait with bated breath, whilst keeping a careful eye on the other lanes. Among those cutting a dash will be Bahamian athlete Shaunae Miller-Uibo (22’’03 this year), whose personal best over the distance (21’’74) earned her 12th fastest place in history, as well as Nigerian Blessing Okagbare (22’’59 in 2021), credited with 22’’04 in 2019.