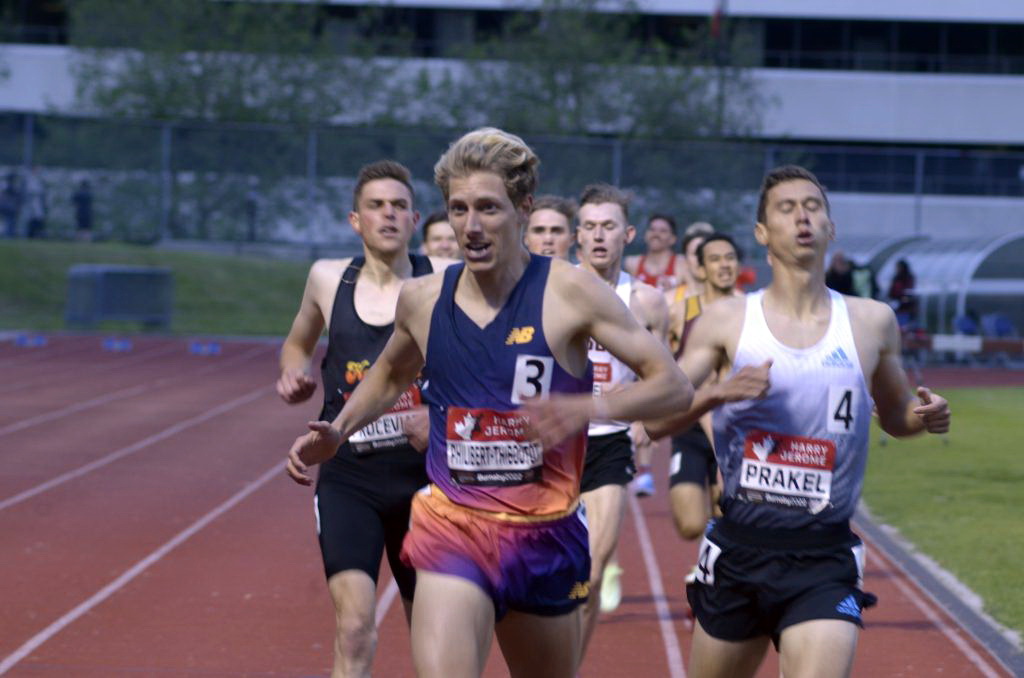 The talk among the organizers, volunteers, media, athletes and coaches was that it was nice to finally be back on the track with a live audience at the Harry Jerome Track Classic. Mother nature played along and finally let up on the perpetual rain that has cruelly pelted Greater Vancouver through spring.

The main event Tuesday was the men’s 5000 metre race. Local, Lucas Bruchet, who typically runs very well at Swangard Stadium didn’t get the result he was looking for. Training partner and pacemaker John Gay took the field out hard. The purpose may have been to help Bruchet run a season’s best. His personal best from last year is 13:12.65. The 2022 World Athletics standard is 13:13.50. He was a little off that pace by the end despite a good race effort.

Kitchener, Ontario’s Ben Flanagan took in the race. His personal best coming in was 13:20.01. If anyone was going to give Bruchet a run for his money it was Flanagan. He patiently waited for the pacers to drop off, then took the lead for the final few laps, creating a gap that the field didn’t cover.

“I was happy with the result. Yeah, every time I come out to Vancouver, I have to race Bruchet,” chuckled Flanagan. “He races well here, but kudos to John Gay for taking them out hard and trying to get a good time. I felt good and sat and waited before taking the lead.”

Flanagan clocked a 13:24.94 for the win. Finishing in second place was Thomas Fafard from the C.A. Université Laval with a new personal best by four seconds. He recorded a 13:30.50 performance. Bruchet finished in the unfamiliar third position in 13:35.77. The 31-year-old likely has much more in him and may run much faster at the Canadian Track and Field Championships in Langley which runs from June 23 to the 26th.

“I would like to put another performance like that together before deciding on which marathon to do next year,” shared Flanagan. “I am not concerned too much about how fast I go in my debut but, as my coach says, I should just have a good experience overall in that first go at it.”

Asked which marathon he may target he wasn’t sure yet. “I like to compete in North America. I don’t know. If Boston suits, I may do that or Toronto. I won’t be ready for Toronto this year, but perhaps next year. We will see.”

Tokyo Olympic gold medallist in the decathlon, Damian Warner, won the 110m hurdles in the time of 13.68, then won the long jump competition with his first leap which was 7.68m. He fouled three times after that.

His presence in the stadium was a crowd pleaser. Each jump attempt, which was situated directly in front of the grand stand was met with chanting and applause.

Asked about the trouble with landing the long jump he said, “We competed in Austria a week ago. Usually, I take a week off and get into training slowly but we had this opportunity to come here and compete, so we thought we would jump in. I knew I was not going to be quite sharp. We are focussed on Oregon right now but it was a cool opportunity to compete here because in decathlon at the end of the day, sometimes you are not going to have the best performances and you just have to muscle it out and compete and that is what I did today. The results weren’t necessarily the best in the hurdles and the long jump for anybody but at the end of the day you are trying to win those competitions and I was able to do that.”

Charles Philibert-Thiboutot, also known as “CPT,” from Quebec City, but now living in Vancouver, has been a top-flight 1500m runner for Canada for several years. Lately, though he has run well in the 5000m and 5K distance events. CPT broke the Canadian record in the 5K by winning the B.A.A. Boston 5K that takes place the day before the Boston Marathon. On April 16 this year, he took the win and the record with a 13:35 performance.

Asked if he will move up to the 5000m, he said, “I would like to double and do both. The best milers in the world right now are extremely strong and guys are able to run 3:30s for three races in a row and get to the third race and to bang one at World’s you need the strength to do that. So, I have been working on my strength. And this year, I would like to be competitive in both. I have the opportunity to run both at World’s and the 5K being after the 1500 is just a little bonus, so I am really looking forward to that.

Typically, athletes need the qualification time as well as finish top-three at nationals. The only guaranteed placements on the track are when an athletes run standard and win their event at nationals — it is a motivator for fast racing at nationals, rather than tactical efforts that often happen.

Regan Yee, who has held the national record briefly last year at 9:27.54, competed Tuesday and clocked a 9:40.72. She will need to run 9:30.00 to make the World Athletics Championships. It’s doable, but the Vancouver resident will need to get into a race that goes out at that pace. Trying to hit standard at nationals, is more stressful for the athlete, but adds more excitement for the fans.

She was paced early by Grace Featherstonehaugh, but was left in no-person’s land once Featherstonehaugh finished her pacing duties. The standard is doable for the Hazelton, BC native, but it won’t it be easy. She is fit as she has run two new personal bests in 2022 in the 1500m and 3000m events.

Yee represented the Langley Mustangs, while second-place finisher Julia Howley is with the Vancouver Thunderbirds. She clocked a 9:56.18 performance. Erin Teschuk, who trained with the Athletics Canada West Hub in Victoria for a few years moved out to Kingston, Ontario last year. She was back on the coast for the Jerome meet and finished in third place in the time of 9:58.64.

The Harry Jerome Track Classic is a stop on the Athletics Canada National Tour. The next tour meet is the Victoria Track Classic on Thursday at the University of Victoria’s Centennial Stadium.

The National Track and Field Championships will take place in Langley, BC, which is located in Greater Vancouver’s lower mainland. Athletics Canada has selected two racewalkers and six marathon runners for the 2022 Eugene World Athletics Championships.

June 29 is the final selection announcement for the remainder of the athletes.