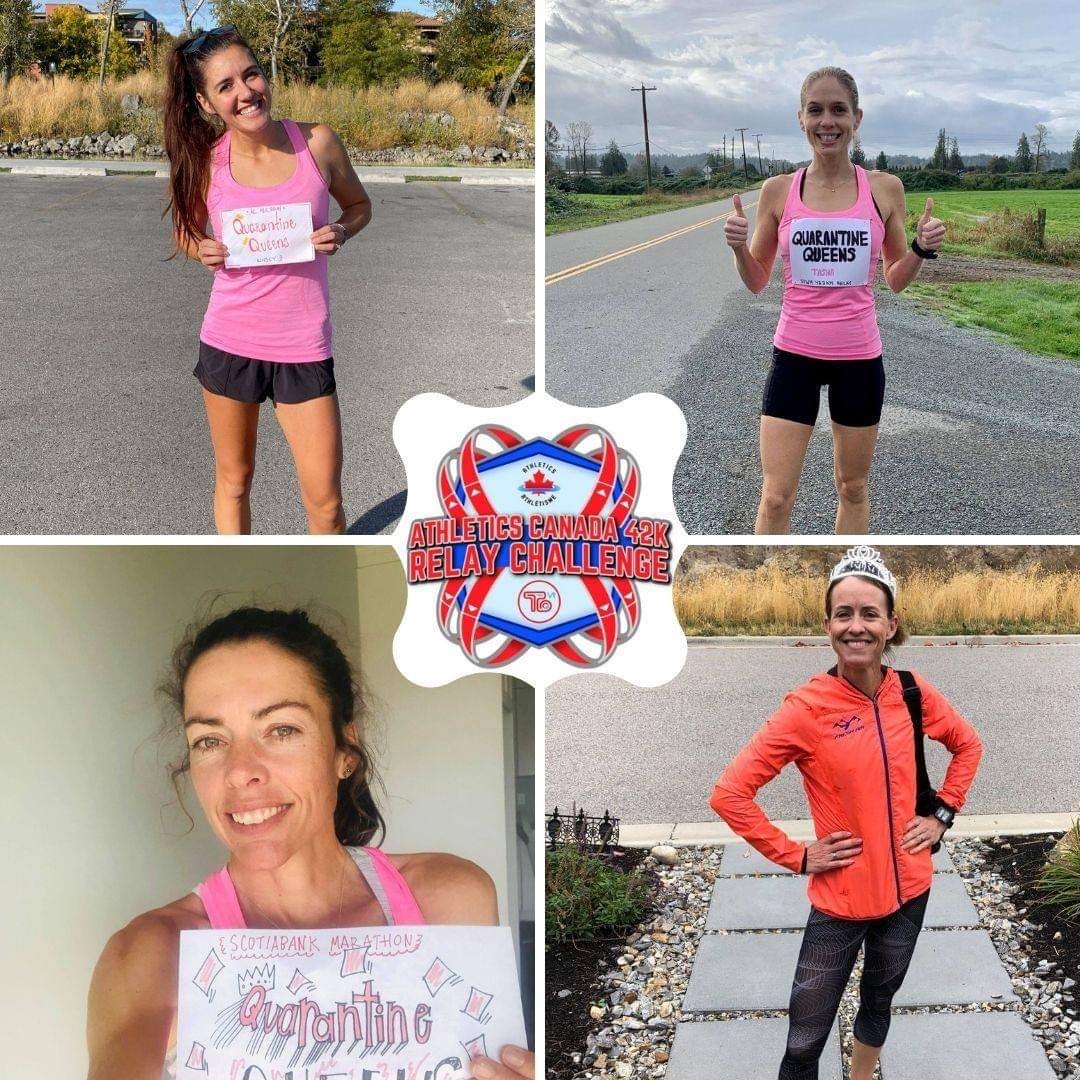 West Coast-based teams proved dominant in the Athletics Canada 42k Relay Challenge – a substitute for the 2020 National Championships at Scotiabank Toronto Waterfront Marathon – as the BC-based ‘Quarantine Queens’ won the Women’s relay in a combined time of 2hrs 22 minutes and 39 seconds.

That was almost 9 minutes faster than their rivals from St John’s, Newfoundland, ‘The Rockin Rock Ladies’ managed over the weekend.

In the ‘Mixed’ category it was the BC Endurance Project ‘BCEP White’ team that prevailed
beating their training partners ‘BCEP Red’ 2:11:46 to 2:12:41.

The men’s winners were the ‘Backroads Bandits’, a late entry from London, Ontario, thus
salvaging some Eastern Canadian pride. They combined to run the 42km in 2:09:01.

Setlack ran an impressive 32:49 for her 10km leg on Saturday.

The two BCEP teams included three members of Canada’s 2020 World Half Marathon team – Justin Kent, Rachel Cliff and Ben Preisner – which Athletics Canada withdrew last Wednesday due to the increase in Covid cases in Poland. The championships were held Saturday in Gdynia, Poland.

It might have been a small consolation for missing the chance to represent Canada, as he did at the 2019 World Cross Country Championships, but Justin Kent ran a superb half marathon (21.1km) leg of 62:34 in leading ‘BCEP White’ to victory. With coach Richard Lee following on a bike he ran two laps of Vancouver’s famed Seawall. His teammates Kevin Coffey, Erica Digby, and Kirsten Lee ran a day earlier.

The most outstanding legs amongst the ‘BCEP Red’ team members came from Cliff and Luc Bruchet who both ran 8km time trials under the watchful eye of coach Lee. Cliff recorded a time of 26:44 while Bruchet, a 2016 Canadian Olympian over 5,000m, ran an extraordinary 22:47.

The pair were joined by Ben Preisner, the 2019 Scotiabank Toronto Waterfront Half Marathon champion, and Ali Gill.

The much-heralded ‘Random Track Club’ wound up third in the mixed team category. Matt Hughes led the team with his 65:18 for 21km with Paddy Birch, Madie Davidson, and Maddy Kelly totaling 2:17:36.

The men’s race was a surprising victory for the ‘Backroads Bandits’ as they beat ’Guelph
Marlins of Southgate’ comprised of Mitchell Ubene, John Perrier, Nicholas Bannon and
Ethan Kruisselbrink. They recorded a finishing time of 2:12:41.

‘M2M’ were third in 2:14:22 with 2012 Canadian Olympian Dylan Wykes leading the way while two-time Olympian Reid Coolsaet led ‘Coolsaet Go’ a team made up of athletes he coaches to finish fourth in 2:21:35.

Mike Tate, the reigning Athletics Canada Canadian Cross Country champion, had an excellent 10.57km leg of 31:27 on a course which Coolsaet set up in Hamilton, Ontario. He led the ‘Backroads Bandits’ to victory in the men’s category. Although he has been living in Guelph, Ontario since graduating from Southern Utah University he is planning a move to London Ontario. His teammates, Chris Balestrini, Phil Parrot-Migas, and Jack Sheffar ran on a course with rolling hills north of London.

“The event was really fun! I ran a marathon (2:17:05 in Waterloo) on October 4th and Phil was gearing up for the World Half Marathon Championships,” says Balestrini, the team leader.

“Initially we didn’t plan on putting a team together, but in the COVID world, we couldn’t pass up the opportunity to race.

“I think everyone was chomping at the bit for an opportunity to test themselves and it didn’t take long to assemble a team that could compete at the national level. These virtual and small in-person events are key for setting checkpoints in training and keeping the motivational fires roaring during the pandemic.”

Wykes was also full of praise for the organization of the event.

“It was great to participate and to be able to show support for Alan and Scotiabank Toronto Waterfront Marathon,” said Wykes, a 2012 Olympic marathoner.

“We had fun within our team, encouraging each other, especially our final runner, Rob (Watson) to really go for it and try to hit a certain time for the marathon. Being the marathon distance was the part that made the event. If it were some random distance it wouldn’t have as much meaning.”

Race director Alan Brookes was delighted with the event.

“We’re thrilled with the success of the #AC42kRelay and want to thank everyone who took part,” said Brookes. “It connected us from St. John’s to Vancouver; it brought the thrill of elite Canadian competition to our Virtual Race Weekend, and inspired us all!”

There is still time for recreational relay teams to match themselves against these elites. Anyone may assemble a team and join the Open four-person marathon relay by registering on the STWM.ca website.

The cost is CA$135 per team of four, and team members can run their legs anywhere and at any time between October 1st-31st.

Each of the Open relay participants will receive a reward package that contains a New Balance souvenir T-shirt, a unique medal featuring an engraving of Toronto’s Old City Hall clock tower, discounts from the Running Room, and a personal hand-written “Thank You” note from a Canada Running Series staff member.