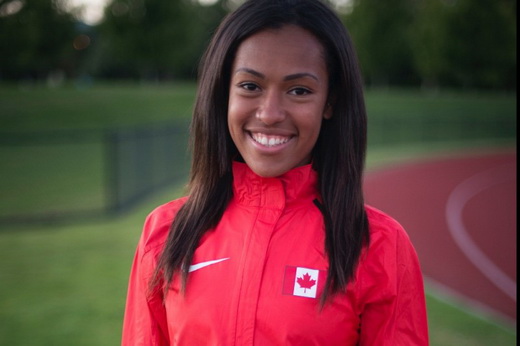 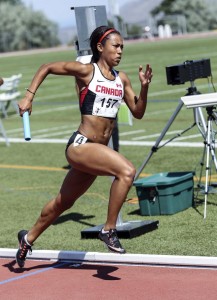 Whitney Rowe of Burnaby, BC is one of Canada’s top young track and field athletes. She specialises in the 200m and long jump events. Rowe just completed her NCAA career, graduating with a degree in Psychology from Colorado Mesa University.

Like many athletes in Canada, Rowe is seeking the qualification standard for the 2015 Toronto Pan Am Games, 2015 Beijing IAAF World Track and Field Championships and the 2016 Rio Olympic Games.

The Olympic and World championships standard for the Long Jump is 6.70-metres, while the Pan Am Games will require a top-two distance jump during the qualifying window, which ends at the Canadian Track and Field Championships that are taking place in Edmonton from July 2nd to the 5th. Leading up to the championships, over the next few weeks, the National Track League will take place in five locations including Guelph, Halifax, Edmonton, Vancouver and Victoria. Competition to make Team Canada should be intense.

Christopher Kelsall: Will you be racing in the National Track League this year? If so, which meets?

Whitney Rowe: Yes, I’ll be competing in Harry Jerome Track Classic on June 8th. I’ll be focusing on long jump this summer and getting in a good mark for Pan Ams. If a world standard mark comes with that it’ll be a bonus.

CK: So are you moving away from sprints and the triple jump?

WR: I’m actually not a triple jumper, I competed in it once with no practice just to have fun and try something new. The sprints I’m not moving away from as you still need to focus on speed for LJ, but I will just be focusing on Long Jump this summer.

CK: What sports did you play growing up in Burnaby?

WR: I was a dancer for 16 years. I did everything from ballet, acro, jazz, and tap. I played a few years of soccer growing up but too nothing serious.

CK: At what point did you choose to focus on athletics?

WR: Eleventh grade was when I made the decision to shift my focus from dance over to athletics. The biggest contributor to making the switch was realizing I would need a scholarship to go on to post-secondary school. I wasn’t going to get any sort of scholarship for dance and we knew I had natural talent in athletics so we decided to give it a shot.

CK: Do you still find yourself popping a Jeté or a Brisé when no one is looking?

WR: Ha-ha no, I would probably tear a hamstring if I did that.

CK: Are all of your six siblings into sports?

WR: Yes. My entire family is VERY athletic. All of my siblings at one point have run track. My oldest brother still holds his high school record in the 400m. My two youngest siblings just wrapped up their track seasons in Pennsylvania. My little sister is a two-time state champion in gymnastics as well and my youngest brother is a really good wrestler! My older sister is a very strong soccer player and plays in an indoor league. I have a cousin in the NFL, and one who recently retired from the CFL (Geroy Simon).

CK: Strong family genetics! Did Geroy slip you game tickets here and there?

WR: Geroy has been a strong influence in my life since I was very young; I never missed a game until I moved out to Colorado for school. 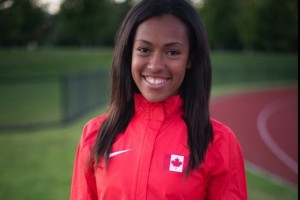 CK: So are you a football fan? If so do you cheer for BC?

WR: Growing up I was a diehard football fan. The love has somewhat faded a little because it’s hard to keep up with the CFL being in the U.S. BC will always have a special place in my heart.

CK: Do you have long-term goals for post-collegiate sports?

WR: Long term my focus is representing Canada on the international circuit.

CK: What made you choose Counselling Psychology as a major? Will you put the degree to use post-athletic career?

WR: I actually graduated with my Psychology degree (I switched from counselling psychology). I’ve always had a passion for helping others especially children. I took a general psychology class my freshman year at CMU and knew right away what I wanted to do. I plan to get my masters in Sports Psychology and work with athletes, and coaches.

CK: Would you suggest that there is some accuracy to the comment that training the mind and understanding the athlete emotionally and psychologically appears to be the next frontier in sport performance and athlete development?

WR: I strongly believe that training the mind is just as important as training physically. An athlete may have all the technique, genetics, and knowledge of the sport on their side but if they are psychologically weak they will not be able to transfer their athletic ability over into competition. Understanding an athlete emotionally and psychologically can increase sport performance immensely.

CK: Have you had a chance to practise sport psychology?

WR: Yes! I worked with my school’s sports psychologist over the last two years with a couple teams on campus. I have also helped some of my teammates with their mental game as well. This year two other athletes and I did research on emotional intelligence and team cohesion and presented this research at the Western Psychological Association convention.

CK: Tell me about your crowdfunding campaign.

WR: I’ve been so fortunate over the past four years to be on scholarship at CMU. However now that I am no longer in the NCAA that means I must cover all costs. Costs include travel and accommodations during season, food and nutritional expenses, training expenses such as paying for memberships, coaches, weight lifting, and therapy. The costs add up very quickly. My goal with my campaign is to help alleviate some of this financial strain so I can focus solely on athletics.

CK: This sounds like a question we can just get from going to your GoFundMe campaign page, but what reward(s) are you offering to contributors?

WR: Everyone who contributes will get a personal message from me thanking them for their generosity. Donations of $75+ they will receive a signed postcard from myself. Everyone who donates $150+ will be offered a group training session, the date for which will be determined once the campaign is over. Anyone who donates $250+ will receive an individual training session with me. I want to stay in touch with everyone who contributes to my campaign to show how much I appreciate their generosity. If I travel to any city that any of my contributors are in I will make the effort to meet all of them in person.