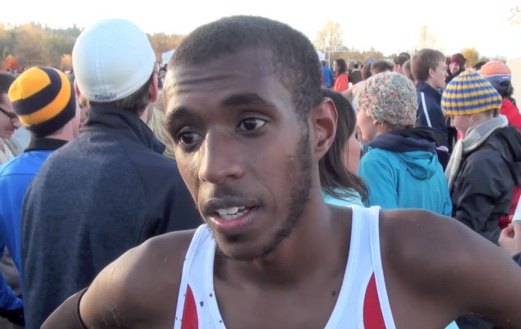 St. Catharine, Ontario native Mo Ahmed has long been running in the shadow – at least within the Canadian media’s view – of Vancouver Island’s Cam Levins. They both run for Nike, albeit in two different camps, they each own a Canadian record; Ahmed’s is in the 5,000-metres while Levins’ is over the 10,000-metre distance. If Ahmed hadn’t yet stepped out of the shadow before Saturday’s Prefontaine Classic, he surely did so during it.

He didn’t belong there anyway.

Ahmed’s third-place performance, which included him uncharacteristically taking the lead with a lap to go, caused a social media flutter that likely provoked all sorts of non-running folk to ask, who is Mo Ahmed?

Running on the cusp of sub-13; toying in the area seemingly reserved in the annals of track history for athletes who are almost exclusively from two countries: Ethiopia and Kenya, is simply stuff of legend.

Asked to describe his perspective on how the race played out Ahmed told Athletics Illustrated, “The race went off as expected – pretty quick. I got shuffled right to the back of the pack from the get-go and found myself right behind my training partner Ryan Hill, which allowed me to relax and find rhythm – given the familiarity with his stride pattern. I made some good decisions to steadily move up mid-way through the race, which culminated in me taking over the lead with a lap to go. I got a little too excited once I took the lead, which blew me up [over] the last 150m. But it was a good momentum builder heading into critical months before The Games.”

The Games of the 31st Olympiad, visiting their 23rd nation, inviting the world to contest hundreds of events and starting in just 68 days, will include Ahmed in the 5,000-metres. He has been there before, in London 2012, running in Levins’ shadow in the 10,000-metre event. Levins finished a solid 11th in the time of 27:40.68, seven places up on Ahmed and his 28:13.91 finish time. It was a typical global championships race of unexpected surges and nerve jangling moments of sitting, while the pack accordions in and out. Records are ignored, placing is everything. Lactic acid visits early and often.

On expectations at Pre, Ahmed shared, “Going into the race my main objective was to be as competitive as possible. 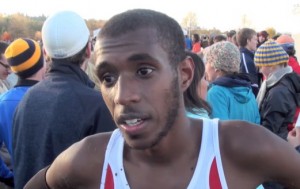 Timewise I was hoping to crack the 13:10.00 barrier.  I guess my PB and the Canadian record being exactly that meant I was targeting a Canadian record, but honestly I’d hoped to be competitive, that’s all. As for any indicators for a low-13, there was a couple of 5K-specific sessions that told me I was fit. But honestly, I didn’t expect that, especially how early it is.”

Who is Mo Ahmed? An aerobic giant, a fantastic specimen of speed and rhythm, a gazelle calmed in the herd chasing to safety, an athlete who stands out on the national stage on his own, with a brilliant record in hand and a second, greater shot at Olympic glory.