I have received a great volume of email messages about the Canadian men’s 4 x 100m relay team disqualification at the London Olympics. Many are asking for further clarity of the rules that are written by the International Association of Athletics Federations (IAAF) – the governing body for the sport of athletics. I think it will be easier to write an opinion, blog-like article than to answer all of the email queries. So below I hope to achieve a little clarification on the matter. Thank you for all of your email messages.

Canadian Men’s 4 x 100m relay team finished third overall in the final relay race of the 2012 London Olympic Games, Saturday, August 11th. For a few minutes the team and likely all of Canada were celebrating the bronze medal performance. The performance was a bit of a pleasant surprise and a welcome diversion from some of the near misses by Canadian athletes who were expected to medal, like Dylan Armstrong in the shot-put, Jessica Zelinka in the heptathlon and 100m hurdles as well as Nate Brannen in the 1500m – all of whom are capable on the right day of earning a medal. In triathlon (not an “athletics” event) both of Canada’s favourites had some serious bad luck thrown their way with Simon Whitfield crashing early on in the bike portion and breaking his collarbone and Paula Findlay just not having had an opportunity to train properly, came in last place, in tears.

The relay bronze would be a nice tonic for Canadians however, third leg runner Jared Connoughton stepped on the line of the inside of his lane. On the giant video screen located in the stadium, Connoughton watched the replay and saw that he had stepped on the line while running the curve. He knew at that moment that there was every likelihood that the team would be disqualified and they were.

The team from Trinidad and Tobago who finished fourth behind Canada, America and Jamaica also had a runner step on the line, but no disqualification was handed down to them, which has created some confusion amongst track fans. Trinidad and Tobago were awarded bronze position while team Canada members dealt with the reality of being disqualified. The IAAF rule indicates that no runner in the sprints shall run outside of their lane and stepping on the line (to gain advantage) is viewed as being outside the lane. Based on this information, many people feel that Trinidad and Tobago should also be stripped of the bronze and that medal should be handed to the fifth place team, France. However, on the straight-away stepping on the line, while not impeding your competitor is not seen as gaining advantage. The difference here is that Canada may have gained the tiniest advantage by stepping on the inside line while rounding the curve. 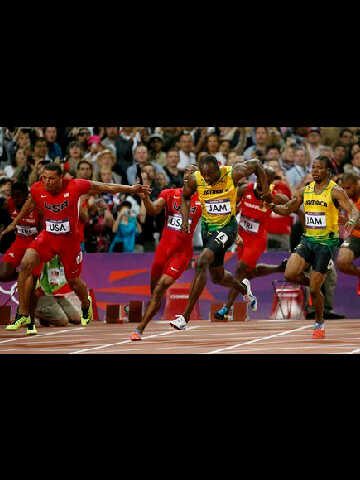 The real question is, why did the USA not get disqualified?

Here is a picture of team USA, on the curve, gaining advantage by stepping on the line, near the exchange.

Here are the IAAF rules, which make it clear that Canada and America should be disqualified and Trinidad should be awarded silver and France bronze.

Lane Infringement
3. (a) In all races run in lanes, each athlete shall keep within his allocated lane from start to finish. This shall also apply to any
portion of a race run in lanes.

The rules are fairly clear and so are the photo, The order of finish should be:

What do you think?

Here is an image of a 400m track. The 3rd hand-off zone is clearly part of the final curve of the track. 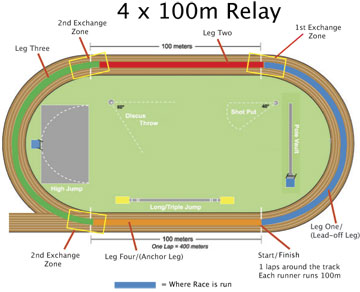