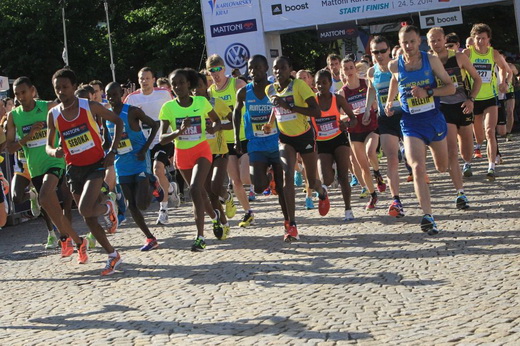 Watch the Race live on www.Seznam.cz @ 1745 CET on Saturday

Whoever wins the men’s and women’s titles in the Mattoni Karlovy Vary Half Marathon on Saturday will have earned their achievement. The third edition of the IAAF silver label road race has six men who have run under 61 minutes while the women’s race also has good quality with possible surprises in store.

Ethiopia’s Andualem Belay is the fastest in the men’s field with 60:10 but the Kenyan duo of Nicholas Kipkemboi and Edwin Kiptoo have both run just one second slower. Ethiopia can also claim the fastest runner on the start line in the women’s race with Tsehay Desalegn, a 69:04 performer. Her compatriot Mulu Suboka should also be among the contenders since her best of 73:20 – from four years ago – looks long due for improvement following her 2:21:56 for sixth place in the Dubai Marathon in January. Not to be overlooked is the half marathon debut of Ireland’s Fionnuala Britton, twice a European Cross Country champion. She has already run a marathon, finishing tenth in 2:31:46 at the European Championships a year ago.

Nicholas Kipkemboi surveyed the elite start list and reflected that the threat to his hopes could come from any quarter: “I finish first here, I’ll be happy, but if I finish second, I’ll still be happy. But I believe I can run under 60 minutes and set a personal best.” That would delight the RunCzech organisers for the latest in the seven race series, since the men’s course record stands at 61:21 by the Ethiopian Teshome Mekonen last year. Kipkemboi is a familiar figure on the Czech roads, having set his personal best with fourth place at the Sportisimo Prague Half Marathon in 2014. Three weeks ago he slipped and fell when in the lead pack of this year’s race, but is now fully recovered.

While the Ethiopians Tsehay Deslagn and Mulu Seboka lead the women’s entries on fast times, Bahrain’s Kenyan-born Eunice Chumba was in confident mood at the pre-race press conference: “My best is 70:46 when I finished second in Marrakech last year, but I believe I can run 68 minutes here on Saturday.” If that promise were realised, a big chunk would have been cut from the current course record of 69:17 by Christelle Daunay of France from last year. Track training for the 10,000m where Chumba hopes to gain selection for Bahrain at the World Championships in Beijing has not hindered her confidence for road racing: “On the contrary, I’ve found it a good balance.” The 21-year-old has been competing for Bahrain for almost two years and maintains a training base in Iten while appreciating the support she receives from the Bahrain federation. She has proved a good investment, running 32:27.69 for 10,000m to finish sixth at last year’s Asian Games. The leading Kenyan challengers are likely to Linah Cheruto (70:43) and Lucy Murigi (70:52).

The beautiful and historic Spa town will be the setting for the Mattoni Karlovy Vary Half Marathon this Saturday, May 23. The race can be seen live with English commentary on www.seznam.cz from 1745 CET.