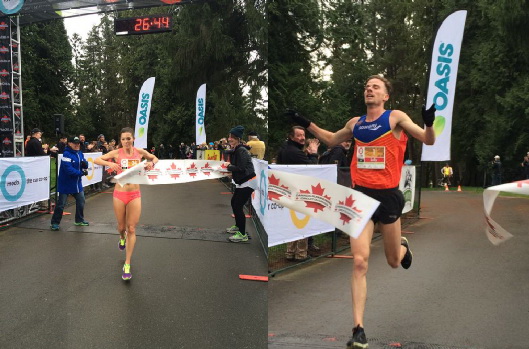 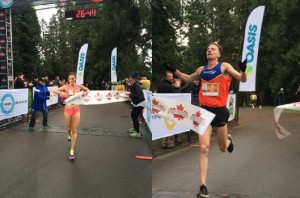 The Canada-wide, Scotiabank Canada Run Series kicked off today with the Modo 8K Spring Run Off in Vancouver’s Stanley Park under cloudy skies with mild temperatures.

Winners were Vancouver’s Kelly Wiebe who crossed the line in 23:42, 23 seconds faster than his 2014 win. Lanni Marchant won in the time of 26:43. Rachel Cliff who finished second today finished second in the 2014 edition and is coming off of her 16:15 win from last weekend’s St. Patrick’s Day 5K, Cliff’s time was 26:55. Marchant finished ninth, two weeks ago at the New York City Half Marathon, second Canadian to Natasha Wodak, who won the Modo 8K event in 2014, finishing sixth overall in the time of 26:39 – she holds the Canadian record for the distance at 25:28. Third place finisher today was Dayna Pidhoresky, who finished in 27:13.

During the 2014 edition Wiebe finished first in the time of 24:05. Today Geoffrey Martinson finished second in 23:58, while Chris Winter finished third in 24:05, matching Wiebe’s winning time from last year. Wiebe won the previous weekend’s St. Patrick’s Day 5K that took place at the same venue starting and finishing at the Pavilion.

Kevin O’Connor (45-49) and Catherine Watkins won the masters division in 25:37 and 28:00, respectively. O’Connor finished in ninth position, while Watkins was fourth female.

The Scotiabank Canada Run Series includes nine races from as short as five kilometres and up to the marathon with the Scotiabank Toronto Waterfront Marathon, which takes place in October 28th this year.

The next two Canada Run Series events both happen in Toronto with the Harry’s Spring Run Off 8K and 5K on April 4th and the Toronto Young St 10K Sunday, April 19th – the same weekend as the Vancouver Sun Run 10K.