The marathon world record should be challenged this autumn when the world’s fastest man over both the 5,000m and 10,000m distances, Kenenisa Bekele of Ethiopia, will run the Bank of America Chicago Marathon on October 12th, his second attempt at the distance. If he takes the marathon world record, he should be considered without a doubt the greatest male distance runner in history.

Before his debut, Bekele was careful not to make bold predictions, siting his inexperience with the marathon distance. Now that he has experience in the marathon, he expects to take the Chicago course record, which is near the world record that is owned by Kenyan Wilson Kipsang Kiprotich with his 2:03:23, achieved on the Berlin course, “After my win in Paris, I understand the marathon distance a lot better and I will bring that experience to Chicago. I know Chicago has a very fast course and, therefore, my goal is to break the course record of 2:03:45. After that, everything is possible.”

There are two faster marathon times that the International Association of Athletics Federations (IAAF), the governing body of the sport does not recognise as they were run on the B.A.A. Boston Marathon course. The course is considered aided, as it runs point-to-point. It also has a net drop of 480 feet (146.3m). The two faster times are also held by Kenyans, Moses Mosop with his 2:03:06 and Geoffrey Mutai’s 2:03:02 both from the 2011 edition.

“Kenenisa Bekele is one of the best, most versatile and exciting athletes competing on the global stage today,” says Bank of America Chicago Marathon Executive Race Director Carey Pinkowski. “Any time an athlete of Bekele’s caliber lines up to race, course records and world records are in jeopardy. We expect Bekele to put on a speed show, and it’s not out of the question to think that Bekele could bring the World Record in Chicago.”

Bekele may have more than one incentive to run a recognised marathon world record. No modern day runner has simultaneously held all three 5,000m, 10,000m and marathon (42.195K) world records; however, the legendary Czechoslovakian runner Emil Zatopek did win gold in all three events at the 1952 Helsinki Olympic Games. More recently Ethiopian great Haile Gebrselassie has twice held the marathon record with his two runs in Berlin, Germany of 2:04:26 (2007) and 2:03:59 (2008), before the record was again broken by Makau and Kiprotich in 2011. Gebrselassie owned the 5,000m and 10,000m world record simultaneously before they were taken by Bekele.

Ethiopians (Bekele and Gebrselassie) own the fastest times in the 5,000m and 10,000m distances, while it is Kenyans who currently dominate the marathon. The two countries are fierce competitors and there is little doubt Bekele would like the record back for his country as much as for himself.

According to the IAAF Scoring Tables, Bekele’s 5,000m and 10,000m bests match nearly perfectly at a points rating of nearly 1295, which translate to a 2:02:42 to 2:02:45 marathon, which takes the recognised marathon world record into brand new territory.

“If weather conditions are ideal and Bekele’s pacers run accurately, there is every reason to expect that Bekele can take the world record in the marathon in Chicago on October 12th and doing so would position him irrevocably as the greatest distance runner in history.“

Chicago’s course is very flat, however, the area is prone to wind and wind-tunnel type effects from the taller buildings in the downtown core. The course record is held by Kenyan Dennis Kimetto at 2:03:45.

The world marathon record has been set at the Chicago marathon four times, twice each by women and men, as Catherine Ndereba of Kenya ran 2:18:47 in 2001, while Brit, Paula Radcliffe, the current world record holder managed to improve that time to 2:17:18 in 2002. American Khalid Khannouchi was the first marathon runner to break the 2:06:00 barrier when he ran 2:05:42 in 2000. Steve Jones of England was the first to take a world record on the course in 1984 with his performance of 2:08:05.

If weather conditions are ideal and Bekele’s pacers run accurately, there is every reason to expect that Bekele can take the world record in the marathon in Chicago on October 12th and doing so would position him irrevocably as the greatest distance runner in history. 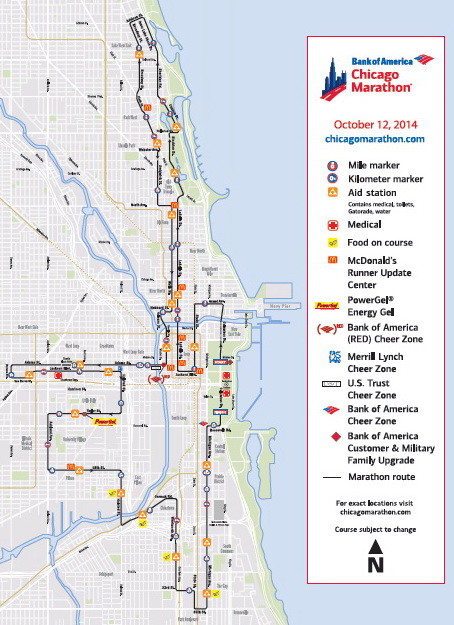