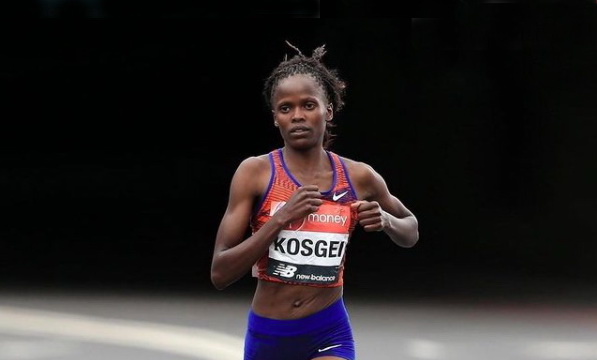 Buddha said, “Three things that cannot be long hidden: the sun, the moon, and the truth.”

At this time, the weather forecast for the London Marathon on Sunday offers clouds with some sun and rain. The truth will also reveal itself around 11:20 a.m. Perhaps the moon will make an appearance to complete the trifecta.

It’s been a long wait, but we’re delighted to be taking over the capital once more.

Kosgei took the London Marathon on Oct. 4, 2020, in St. James Park in the time of 2:18:58. The weather was cool, rainy, and windy. Perhaps she prefers the milder conditions, as she managed to finish just second in the Tokyo Olympic marathon in Sapporo, Japan in August. It was quite warm. Fellow Kenyan Peres Jepchirchir won the race in the time of 2:27:20. Kosgei finished in the time of 2:27:36, while American Molly Seidel took a third in 2:27:46.

Kosgei, whose middle name incidentally happens to be Jepchirchir, clocked 2:18:20 in London in 2019. She has won a total of eight marathons during her career. Can she do it this Sunday?

Having run the Tokyo marathon on Saturday, Aug. 7, it may or may not be too soon to again make a world-class attempt at the distance. But saying that, she is after all Brigid Kosgei, the world record holder, Olympic silver medallist, and eight-time marathon winner.

Others that she will be up against include Joyciline Jepkosgei, Birhane Dibaba, and Roza Dereje.

Kosgei told Olympics.com, “It is a great feeling to be coming back, as London is one of my favourite marathons. Last year’s win was very special, particularly given what the whole world was going through.”

And the pandemic continues, hence the modified route through St. James Park and an October running of the race rather than its usual April date.

Ethiopian Dibaba will be in the mix and gunning for the win. She has clocked a 2:18:20, just last year during the Tokyo Marathon (not Olympics) for the win. The 28-year-old has finished second and third during the Berlin and Chicago Marathons (2) and very much will want to take this race. However, she finished just ninth and nearly six minutes back of the lead at the 2020 Valencia Marathon in the time of 2:23:07. That result was likely an anomaly.

Dereje is notable for her 2019 Valencia win in the time of 2:18:30, as well as her fourth-place finish in Sapporo during the 2020 Tokyo Olympics. The 24-year-old has won five marathons and finished on the podium at two more.

Will Dereje and Kosgei be able to turn it back on after the challenge and effort of Sapporo? Only time will tell (on Sunday) when the truth — and perhaps the sun and moon will be revealed.

Buddha is also noted for the oft-quoted aphorism, “Do not dwell in the past, do not dream of the future, concentrate the mind on the present moment.”

Great marathon runners stay “in the moment” the entire time that they toil over the 42.195km distance toward the win. They again will have to be in the moment as the field is deep and fast.