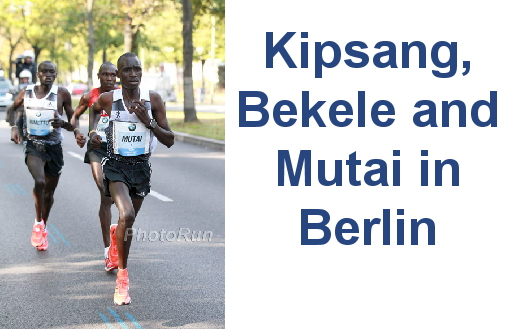 Expectations are high once again for a very fast race in the 43rd edition of the BMW BERLIN-MARATHON on September 25. All the omens are favourable with the recruitment of another high quality field which, given good weather conditions, points to another year of outstanding, world class times. The former world record holder Wilson Kipsang of Kenya and Ethiopia’s Kenenisa Bekele have taken centre stage as the pre-race build-up has taken place, but alongside them are a clutch of athletes possessing the talent to be right up there with them. Seven runners in the field have best times under 2:06. At the head of the women’s field is the double BMW BERLIN-MARATHON champion Aberu Kebede of Ethiopia. The BMW BERLIN-MARATHON is part of the Abbott World Marathon Majors Series and an IAAF Gold Label event, the highest category of road race awarded by the International Association of Athletics Federations.

The men’s world record has been broken seven times in Berlin and the world’s fastest time of the year was achieved here on five consecutive occasions. These performances combine to make the BMW BERLIN-MARATHON the fastest race for the classic distance of 42.195km in the world. The recruitment of Wilson Kipsang, who brought the world record down to 2:03:23 in Berlin in 2013 and Kenenisa Bekele, who will be looking to make a big improvement on his marathon debut time of 2:05:04 in Paris in 2014, was announced some time ago. But these two outstanding runners shouldn’t think that the race will be simply a duel between themselves.

The fastest man on the start list is not Wilson Kipsang but his fellow Kenyan Emmanuel Mutai. He finished second in Berlin two years ago in 2:03:13, beaten only by the man who set the world record, Dennis Kimetto (2:02:57). Another to take into account is the Ethiopian Tsegaye Mekonnen who will be making his Berlin debut. In 2014 the teenager ran a world junior best of 2:04:32 to make headlines in Dubai but failed to win a place on the national team for the Olympics.

“I think we’ll see a relatively big group in the lead this time since there are a number of athletes capable of going with the kind of pace which will bring a time under 2:04. It could be very exciting and – depending on the weather – very fast,” said the Race Director Mark Milde, who has also brought in three more Kenyans in Vincent Kipruto (2:05:13), Eliud Kiptanui (2:05:21) and Evans Chebet (2:05:33) who have shown they can break 2:06.

While the Japanese Yuki Kawauchi’s best of 2:08:14 may not threaten the leaders, this prolific marathoner will be making his Berlin debut. Noted for the frequency and consistency of his marathons, the 2014 Asian Games bronze medallist has already run five races at the distance this year, including his most recent effort of second place with 2:09:01 in Australia’s Gold Coast marathon on July 3. In 2014 he ran a total of 13 marathons and the following year even improved on that with 15. However he intends to focus on Berlin and ran less marathons this year.

Ethiopians are the favourites in the women’s race. Aberu Kebede not only has the fastest personal best but a great deal of experience in the BMW BERLIN-MARATHON. Her tally from three appearances comprises two wins and one second place, an impressive CV. Kebede won in 2010 in 2:23:58 and set her current personal best of 2:20:30 two years later when she took tha race again. Last year she was beaten only by the Kenyan Gladys Cherono who ran the fastest time in the world with 2:19:25 with Kebede runner-up in 2:20:48. Her chief ambition remains to break the 2:20 barrier. A third victory in the BMW BERLIN-MARATHON would also bring her level to the pair who have won a record number of women’s titles for the race: Uta Pippig of Germany and Renata Kokowska of Poland.

Two more Ethiopian women will be among Aberu Kebede’s strongest opponents: Amane Beriso took a big step forward with second place in 2:20:48 in Dubai in January. Birhane Dibaba ran her best of 2:22:30 two years ago as runner-up in Tokyo. Their compatriot Ruti Aga (2:25:27) could also have a say in the outcome.

“It’s noticeable with the women’s race that, since we’ve just had the Olympics, many of the top runners ran in Rio. Compared to the men the women’s top marathon runners worldwide have not quite the strength in depth. But the situation also offers the chance for another runner to make a name for herself,” reflected Mark Milde and added: “We hope to have world class performances and a fast race.”

Lonah Chemtai Salpeter to race in the Tuscany Camp Half Marathon