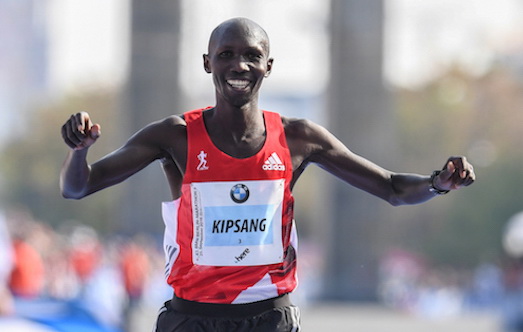 The elite field for the BMW BERLIN-MARATHON on September 24 has grown in star quality even more with the announcement that the man who broke the world record there in 2013, Wilson Kipsang, will join his fellow Kenyan and current world number one Eliud Kipchoge on the start line. Organisers had announced the start of the Olympic Marathon Champion Kipchoge earlier this month. The BMW BERLIN-MARATHON is an Abbott World Marathon Majors (AWMM) event and an IAAF Gold Label Road Race.

Kipsang’s great day in Berlin came four years ago when he ran in the 40th edition of the BMW BERLIN-MARATHON and brought the world record down to 2:03:23, taking 15 seconds off the time set on the same course by his compatriot Patrick Makau. And Makau was on the spot to offer his congratulations since he was attending the event’s jubilee’s celebrations. The world record didn’t last long in Kipsang’s possession. In the next edition of the race in 2014, yet another Kenyan, Dennis Kimetto, became the first man to break 2:03 for the marathon when he stopped the clock at 2:02:57.

In the BMW BERLIN-MARATHON 2016 Wilson Kipsang ran ten seconds faster than his world record but it was only good enough for second place behind the Ethiopian Kenenisa Bekele who missed breaking Kimetto’s world record by just six seconds. Kipsang led for much of the second half of the race and couldn’t match the Ethiopian’s finishing speed. But what Kipsang took away from the experience was the belief that he was still capable of another super-fast marathon. That is what he wants to prove in Berlin on September 24. “My motivation is very high and this preparation will be the sharpest ever,“ said Kipsang, who won the Tokyo Marathon in February with the current world leading time of 2:03:58.

Strong line-up in the women’s race

There will be plenty of anticipation for the women’s race as well: six runners on the start list have already broken 2:24, a clear indication that the BMW BERLIN-MARATHON once again has a high quality women’s field. Four of them are Ethiopians and two are from Kenya. Leading this elite field, at least in terms of personal bests, is the Kenyan Gladys Cherono, winner of the BMW BERLIN-MARATHON 2015 with her lifetime best of 2:19:25. She will have keen competition in the shape of her rivals who include defending champion Aberu Kebede, a triple Berlin winner (2010, 2012, 2016), and her Ethiopian compatriots Amane Beriso, runner-up in Dubai 2016, Gulume Tollesa, the 2015 Frankfurt winner, and Meseret Mengistu, the 2015 Paris champion. Another contender to be reckoned with is the Prague champion this year, Valary Aiyabei of Kenya, with a best of 2:21:57. Everyone of them has shown they have the ability to win marathons on the big stage.

Leading Women in the BMW BERLIN-MARATHON 2017