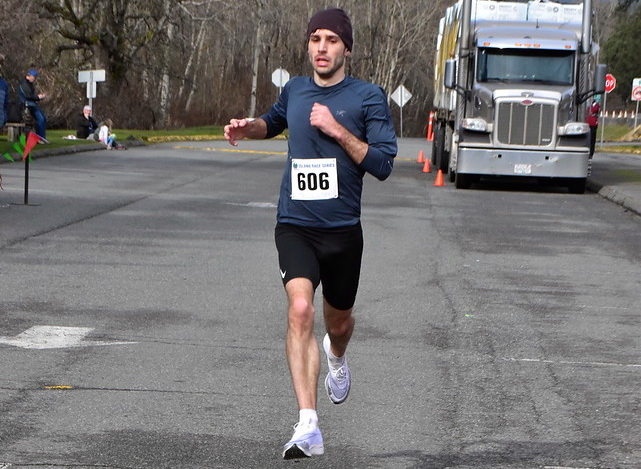 Update: Brandon Vail with the University of Victoria Vikes finished third in 24:42. There was a bib distribution error. Willis apparently did not race.

The 2022 Harriers Pioneer 8K was won Sunday by Tristan Woodfine and Geneviève Lalonde.

Woodfine clocked a new course record of 23:10, which happens to be the third all-time fastest run in the race’s 43-year history. Peter Butler ran 23:09 in 1982 and 1996 Atlanta Olympic Marathon runner Carey Nelson of Vancouver in 1985 ran 22:58. Both performances were on a different course.

Lalonde clocked a 25:58 performance for the win. She is just the second athlete to race sub-26 at the Harriers Pioneer 8K, which also is the 2022 BC Athletics 8K Championships.

Kate Ayers and Brendan Wong won the BC 8K Championships titles, as official BC residents.

“In terms of my race, I was pretty steady throughout. There were a few groups of guys I could kind of hang off of at the beginning but then around 3K it really strung out. Although I kept progressing through the race and catching up to some of the men. It’s great to have them there because it really encourages you to go faster,” shared Lalonde.

The course record was set by Natasha Wodak at 25:55 in 2020. The event record is 25:28 is also by Wodak, which she ran in 2013. It’s the fastest 8K road time in Canadian history. It is early in the season for Lalonde who is expected to compete in the 2022 Eugene World Athletics Championships this summer. Her race season will get more serious in the spring. The performance Sunday is fast considering the time of year.

Kate Ayers finished in second place with her time of 27:31. Elise Coates with the Vikes Athletics Club took third in the time of 28:00. There were 10 Vikes athletes racing the event.

The top masters runners were Willis in the 40-44 age group and Jenn Millar finishing in 28:20.

“The race went well, I was looking to get in a good effort ahead of the NYC half coming up in a few weeks. In that sense I was happy with the result, it’s still early in the season but it seems things are heading in the right direction,” shared Woodfine.

Woodfine owns a 63:19 half-marathon best as well as a 2:10:51 marathon which he ran in London in 2020. The 28-year-old held the third spot for the Tokyo Olympic team with that performance until Cameron Levins snatched away the opportunity with a faster run in Austria, at the 11th hour. Woodfine appealed to Athletics Canada, but to no avail.

Lalonde is a two-time Olympian, specialising in the 3000m steeplechase. She holds the national record in the event at 9:22.40, which she accomplished during the Tokyo Olympic Games.

Originally from New Brunswick, she now calls Victoria home. Her first race in Victoria was the 2020 Pan Am Cross Country Cup at Bear Mountain Golf Resort, which she won. Sunday, she appeared to be in mid-season form.

“Great race today, it was such a nice day to be out and running. There were so many community members and supporters that were helping out and it made for such a fun racing experience,” she added.

“Overall I’m pretty happy with the result, good to see that we are fit and healthy heading into the next block of training and racing.”

Her next race is on the track, a 5000m event in California in two weeks’ time.

The Harriers Pioneer 8K is a race that is part of both the Vancouver Island Race Series and the BC Super Series. The next race on Vancouver Island is the Comox Valley Half Marathon on Sunday, March 13.

Race footage will be available soon.