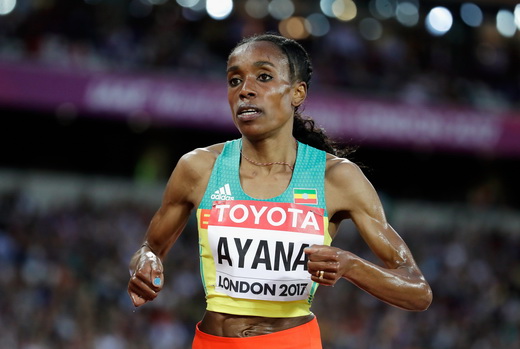 could be the most spectacular yet in the Indian city with race promoters Procam International having signed up 2017 world champions Geoffrey Kirui and Almaz Ayana to contest the IAAF Gold Label Road Race on 19 November.

Kirui, who won the men’s marathon at the IAAF World Championships London 2017 this summer, knows what racing in Delhi is all about and is familiar with the picturesque circuit. The Kenyan runner was sixth in a high-quality affair two years ago, the race which advertised that he was one of the rising stars of distance running, when he set his current personal best of 59:38.

By contrast, the reigning world 10,000m champion, Ayana, will be setting foot on Indian soil for the first time and will also be making her debut over the half-marathon distance. However, all eyes will be on the Ethiopian to see whether she can transfer her stunning form on the track in the last two years, which also saw her break the 10,000m world record when winning gold over 25-laps of the track in Rio, to the roads. Both runners and the rest of the elite field which was announced on Wednesday will be chasing the very strong course records in Delhi.

The men’s course record is 59:06 and was set by Ethiopia’s Guye Adola in 2014 while the women’s course record has been standing since 2009 and belongs to Kenya’s Mary Keitany at 1:06.54. Nevertheless, despite his fine credentials which also include a win in the Boston Marathon back in April, Kirui will not start as a prohibitive favourite. Three of his compatriots have run under 59 minutes, with the in-form Jorum Okumbo, the fastest man in the field, having run 58:48 earlier this year, while Ethiopia’s Yigrem Demelash was second in 2016 and determined to climb one step higher on the podium this time around.

In the women’s race, Ayana will face her compatriot Worknesh Degefa, who is not only the defending champion but the fastest woman in the field having clocked 66:14 in 2016. Indeed, the top three women from 2016 return with Ababel Yeshaneh and Helah Kiprop also coming back to Delhi to challenge for the title again. “Bringing two global champions from London to this race shows our commitment to having the very best runners in the world compete at the Airtel Delhi Half Marathon.” said Vivek Singh, joint managing director of race promoters Procam International.

“This IAAF Gold Label event is deservedly one of the world’s most prestigious half marathon and with the appearance of Geoffrey and Almaz this year, it adds further lustre to its reputation. It is renowned among the world’s top distance runners for its fast course and comprehensive field,” he added.

As the only IAAF Gold Label Road Race in India, the Airtel Delhi Half Marathon can rightly claim to be the nation’s top distance running event. All the leading runners will also have in their sights first prize cheques of US$27,000 with a total prize money purse (combined men and women) of US$275,000.