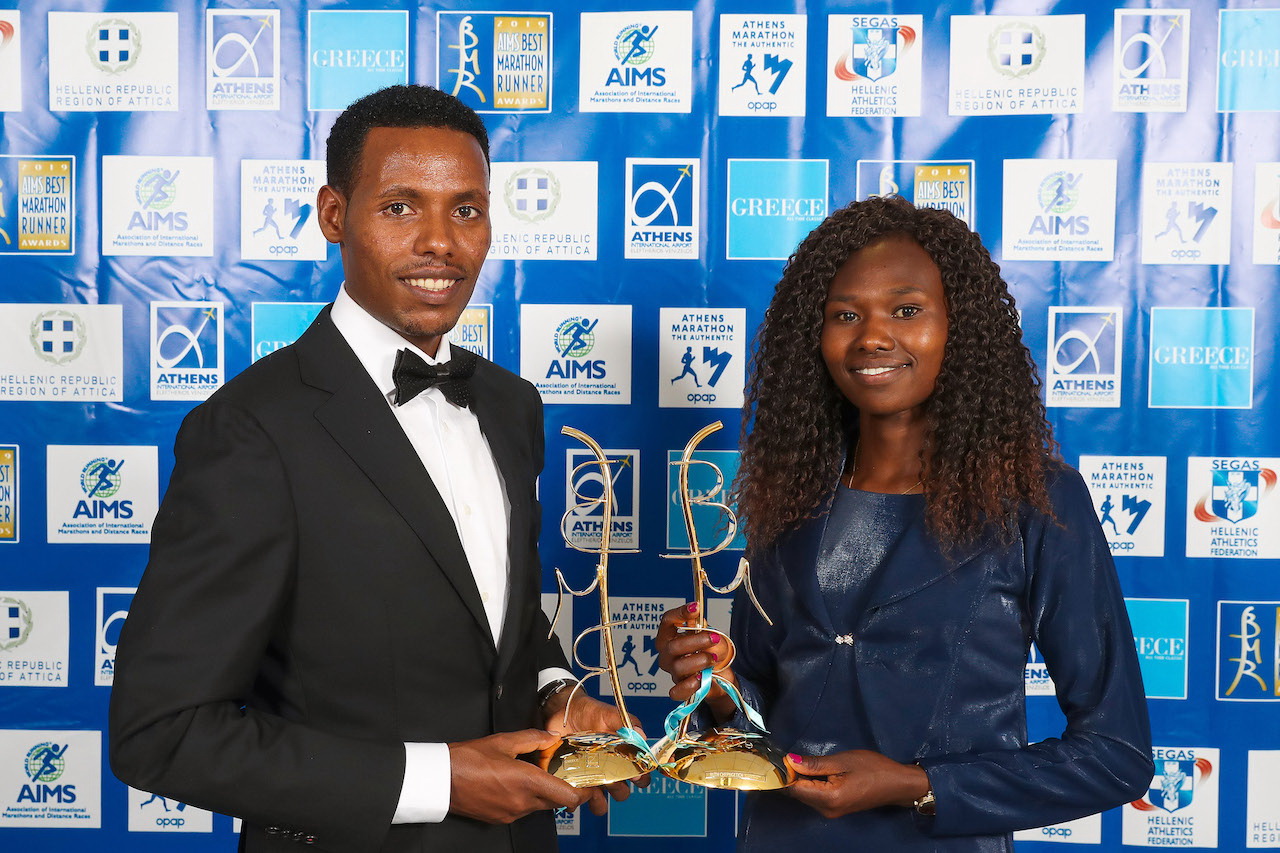 This year’s World Marathon Champions Lelisa Desisa and Ruth Chepngetich are the Marathon Runners of the Year. The runners from Ethiopia and Kenya respectively were honoured at the AIMS Best Marathon Runner (BMR) Gala in Athens Friday night. The Gala, which was shown live on Greek TV, was staged by the Association of International Marathons and Distance Races (AIMS) and the Hellenic Athletics Federation, SEGAS. On Sunday the 37th edition of the “The Athens Marathon. The Authentic” will take place on the original course with a record field of 20,000 runners.

Three further distinctions were awarded by AIMS on Friday evening in Athens: the French journalist Alain Lunzenfichter, for a long time a reporter with the sports newspaper L’Équipe, received the AIMS Lifetime Achievement Award. The AIMS Green Award went to the Xiamen Marathon in China and the Harmony Geneva Marathon for UNICEF received the AIMS Social Award.

Two outstanding personalities in the sport of marathon running were also honoured at the Gala on Friday evening: Britain’s Ron Hill and Stefano Baldini of Italy. Hill won the 1969 European title on the Athens course and Baldini took the Olympic title here in 2004. 15 years after his Olympic triumph, the Italian will be running the Athens Marathon once again. “I hope I can enjoy the race since Athens is a very special place for me,” said Stefano Baldini.

“We are honoured to have the best marathon runners in the world here in Athens, where the marathon as well as the Olympic Games of the modern era began, and honour them at the Gala,” explained the president of the Hellenic Athletics Federation (SEGAS) Kostas Panagopoulos. The AIMS president, Paco Borao from Spain, spoke in referring to both winners: “No-one will be in any doubt that these two World champions, who won in extreme weather conditions in Doha, deserve to be the Best Marathon Runners.”

Lelisa Desisa is the first Ethiopian to have received this award which was first made in 2013. The most recent recipient was Kenya’s Olympic champion and world record holder Eliud Kipchoge who was awarded the prize for the last four years in succession. During the relevant period for the AIMS Best Marathon Runner, Lelisa Desisa won the New York Marathon in November 2018, running an impressive 2:05:59 on the difficult course. After a second place in Boston in April, the 29-year-old Ethiopian won the World Championships marathon gold in Doha, Qatar a month ago. “The Olympic marathon in 2020 is my dream,” said Lelisa Desisa. “I want to follow in the footsteps of Abebe Bikila and win the gold. I hope I can inspire a new generation of young athletes by my success.”

Ruth Chepngetich established herself among the world’s best marathon runners with two outstanding victories: First, she took the Istanbul Marathon in November 2018 with 2:18:35 then became the third-fastest woman ever at that time when she won in Dubai in January with 2:17:08. At the end of September, the 25-year-old took the World Championship title in Doha in extreme weather conditions. “It is a great honour to receive this award in Athens, where the marathon was born. This is a lifetime event in my career,” said Ruth Chepngetich. Asked about the world record, which was recently lowered to 2:14:04 by fellow-Kenyan Brigid Kosgei the BMR winner said: „I believe it is possible for me too to break the world record if I train accordingly.”

Among the distinguished international guests from Sport, Politics and Culture at the Gala on Friday evening in Athens was Greece’s Minister for Development and Investment, Adonis Georgiadis. “I ran the marathon myself last year and have to say, it was a once in a lifetime experience. I recommend everyone to run this race. The Athens Marathon stands for fun, happiness and energy,” added the Minister.

Best Marathon Runner of the Year