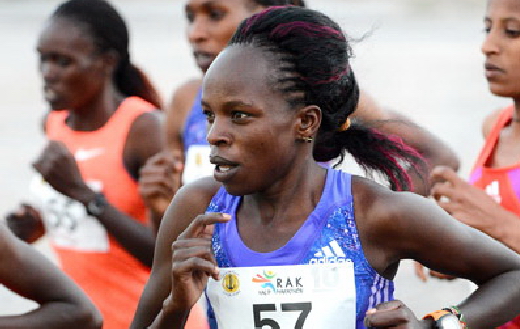 A year of outstanding performances by Peres Jepchirchir could be improved still further if the Kenyan fulfils her marathon potential at the Mainova Frankfurt Marathon on October 30. The 22-year-old has already captured the World Half Marathon title, surprising better known performers to win in Cardiff in Wales on March 26. Consistently strong performances at half marathon, including a personal best of 66:39 for fourth place in the perennially high quality Ras Al Khaimah event in February this year, suggest that the training partner of the African record holder for the women’s marathon, Mary Keitany, has the pedigree to make a successful transition to the full distance. Anticipation will be high following the announcement of Jepchirchir’s participation in the 35th edition of the Mainova Frankfurt Marathon, an IAAF Gold Label Race which is the highest category of road race.

A strong recruit to the men’s race in Frankfurt is fellow Kenyan Mark Korir. The winner of the Paris Marathon in 2015 with an impressive personal best of 2:05:49, Korir should relish the stage which the race beside the River Main offers for fast, aggressive running.

There might be something about the Mainova Frankfurt Marathon which inspires leading contenders in the women’s field to decide on a visit to the hairdresser as part of their pre-race build-up. The Ethiopian Meselech Melkamu went for a golden top knot before making a fine winning marathon debut in 2:21:01 in Frankfurt in 2012 which remains the women’s course record. Peres Jepchirchir took a similar course before her triumph in this year’s IAAF/Cardiff University World Half Marathon Championship in March. Inspired by regular training alongside Mary Keitany in Iten in Kenya, herself the winner of the title in 2009, Jepchirchir added circles of gold to her coiffure before leading a Kenyan clean sweep of the women’s podium. To run 67:17 in wet and far from easy conditions in the Welsh capital was proof of her quality, though the story of athletes moving from the half to the marathon has its share of those who have never quite adapted, leaving them world beaters at the shorter distance yet relative also-rans at the full distance.

If Peres Jepchirchir needs a reminder of a compatriot who made a successful transition, she need only look at a recent winner of the World Half Marathon title, Gladys Cherono, who progressed from her 2014 triumph in Copenhagen to an impressive marathon debut in Dubai in January 2015, finishing second in 2:20:03 before running the year’s fastest time to win the Berlin title with 2:19:25 September 27 last year.

Strictly speaking, Frankfurt on the last Sunday in October will not mark Peres Jepchirchir’s marathon debut: she has competitive experience from one previous race, the Safaricom Marathon in Kisumu in Kenya on December 15, 2013, where she finished third, five minutes behind the winner, in 2:47:33. Putting that time into perspective, this race at altitude has, in the past, often featured athletes who went on to run very much faster.

Having run at school, she first attracted international attention when finishing just two seconds behind Faith Kipyegon in the Kenyan Cross Country Championships in 2014. Kipyegon had won the junior race in the World Cross Country Championships in 2011 and 2013, hence Jepchirchir’s performance heralded another Kenyan star in the making. Reflecting on her rise last year, Peres Jepchirchir was aware of her ability from an early age. “When I was in school, I saw that running was my talent, I used to love to run. At school, I liked the 5,000m and cross country and after 2013 I started to train and to compete from 2014.”

Two years ago her personal best for the half marathon stood at 69:12 and now, thanks to the personal best of 66:39 for fourth place at Ras Al Khaimah in the UAE on February 12, she has improved by over two and a half minutes. She is improving at other distances on the road as well, setting a best of 30:55 for 10km in Prague on September 5 last year.

Mark Korir has the chance in Frankfurt to prove that he can once again rise to the big occasion, as he did when winning the Paris Marathon in 2015. Not only victory but a time of 2:05:49 elevated the Kenyan to a new level of performance. Prior to Paris, his best had been 2:07:08 for runner-up in the 2013 Seoul Marathon. His victory, overhauling compatriot Mike Kigen in the closing stages, showed that Korir has a racing brain as well as the capacity to run fast. Both will be required since the course record of 2:03:42, set by fellow Kenyan Wilson Kipsang in 2011, was only four seconds slower than the then world record and remains the sixth fastest marathon of all time.