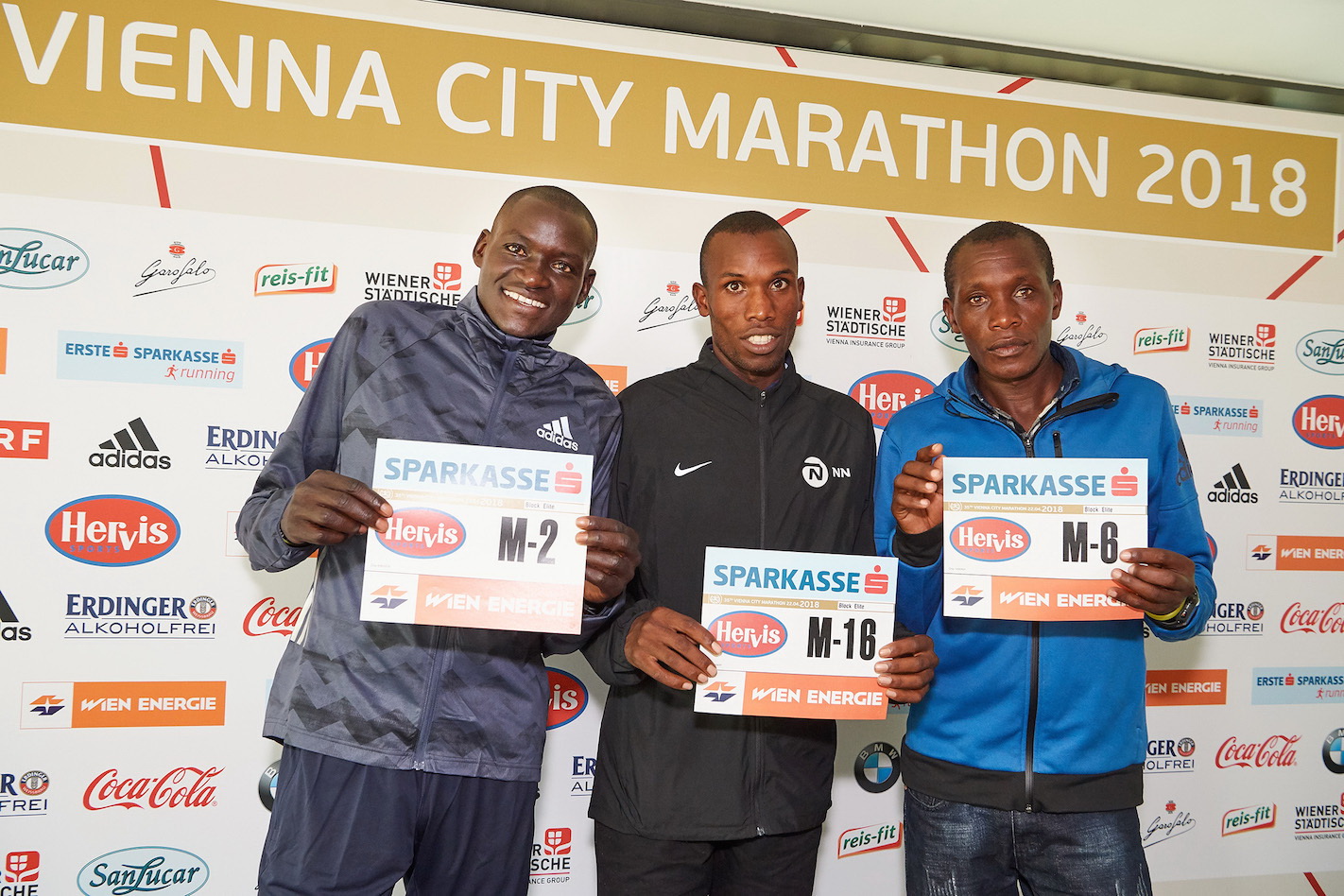 Dennis Kimetto is ready for a comeback. The marathon world record holder, who ran 2:02:57 in Berlin four years ago, has not finished a marathon since April 2016. However the Kenyan believes that his injury problems are finally put behind him and looks ahead optimistic to the Vienna City Marathon on Sunday. Kimetto is the star attraction of the race which will see its 35th edition and is an IAAF Gold Label Road Race. The race will be shown live online at www.vienna-marathon.com on Sunday with the coverage starting at 8.30 am local time (CET).

After a series of sensational results and two world records – Kimetto also holds the current 25 k mark with a time of 1:11:18 which he ran in May 2012 in Berlin – the Kenyan only finished two marathons in the past three years: He was third in London in 2015 with 2:05:50 and then clocked 2:11:44 for ninth place in the same race a year later. „After my first London Marathon in 2015 I was injured again and again for more than two years,“ said Dennis Kimetto. First, he injured his quadriceps muscle, then his groin and finally the triceps muscle.

„It was only in January this year that we found out why I got all these injuries. The reason was a wrong treatment by the physiotherapist,“ explained Kimetto, who then switched to a physiotherapist in his hometown Eldoret, who also treats former marathon world record holder Wilson Kipsang. „Since January I have no more pains and no injuries anymore. I could train properly without any problems.“

With regard to possible time goals Dennis Kimetto remained cautious during the press conference. A couple of weeks ago he indicated that he might go for the course record of 2:05:41 set by Ethiopia’s Getu Feleke back in 2014. With warm weather conditions likely he said: „If the weather is good then I want to run a good time. I think 2:07 to 2:08 would be good.“ If Kimetto should be able to record his first sub 2:10 finish since April 2015 his Vienna race will probably be regarded as a successful comeback.

Last year’s runner-up Ishmael Bushendich and Nicholas Rotich are two runners who could show fine performances on Sunday while Ethiopia’s Dino Sefir had to withdraw due to an injury. Asked if he intends to go one better than last year and win Bushendich answered: „Well, Dennis Kimetto is here. So he is the favourite. It is the first time I will compete against him.“ The 26-year-old has a personal best of 2:08:20 and clocked 2:08:42 in Vienna a year ago despite difficult weather conditions.

In contrast, fellow-Kenyan Rotich features a personal best that is well below par for an international elite field of a major marathon. The 22-year-old ran 2:20:16 in Toronto two years ago. What convinced organisers to invite him was his training background in Kenya. Rotich belongs to the group led by marathon Olympic champion Eliud Kipchoge and world half marathon champion Geoffrey Kamworor. „Training together with them I made up my mind and decided to concentrate on the marathon instead of running half marathons and doing pacing jobs,“ explained Rotich, who was among the group of pacemakers for Eliud Kipchoge’s sub two-hour project in Monza a year ago. „Kipchoge is a great example, showing that hard work and discipline brings rewards. We did all the long runs and the speed work together,“ said Rotich, who hopes to improve by a huge margin on Sunday and might go for a 2:07 time.