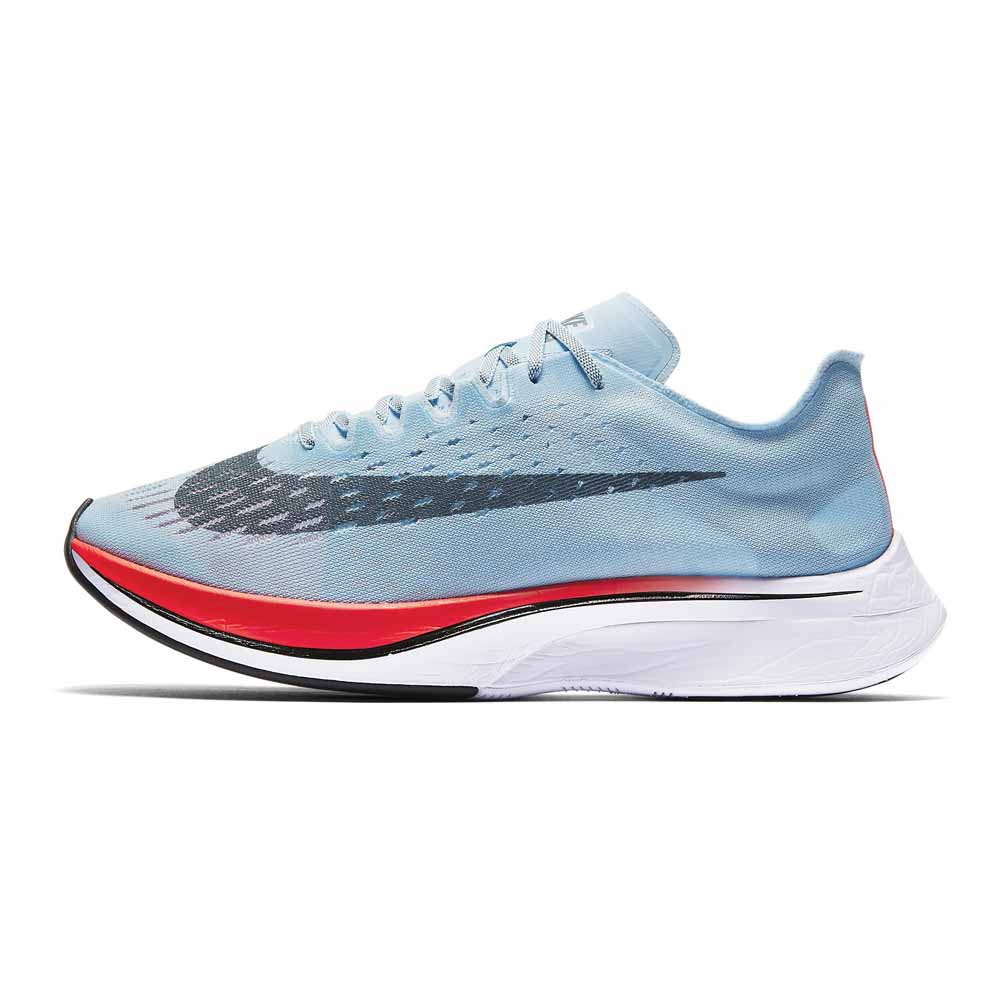 Wouter Hoogkamer, Ph.D., an Assistant Professor at the University of Massachusetts Integrative Locomotion Lab’s Department of Kinesiology Massachusetts, Amherst was involved with the commissioned study of the Nike Vaporfly 4% that garnered the name.

The lab uses a comprehensive approach to study human locomotion, integrating neurophysiology, biomechanics, and energetics. Their work covers the full health spectrum, from the neuromechanics of split-belt walking in individuals with neurological disease to the biomechanics and energetics of elite marathon runners. They focus specifically on how surface and footwear properties can be used and optimized to improve gait rehabilitation and sports performance.

The objective of the study by Hoogkamer, and the team made up of Shalaya Kipp, Jesse H. Frank, Emily M. Farina, Geng Luo, and Rodger Kram, was to determine if, and to what extent, these newly developed running shoes reduce the energetic cost of running compared with established marathon racing shoes.

Christopher Kelsall: You, Shalayla Kipp, and team, during your 2017 research paper on super shoes titled, A Comparison of the Energetic Cost of Running in Marathon Racing Shoes, found an energy cost savings of 4%. How did Nike also arrive at the 4% improvement?

Wouter Hoogkamer: Nike asked us to do this study and funded the study. Nike named the shoe after our findings. But I can’t imagine that before they asked us they didn’t first test this thoroughly internally.

CK: In regards to that paper, did you find out if athletes respond differently from each other, meaning may one person gain a greater advantage over another using the same shoe in the same event?

CK: Were there correlating factors like height, ability, and form? I would assume that runners with more of a shuffle wouldn’t find as much of a benefit as someone with a bouncing or dynamic stride would?

WH: We didn’t find any correlating factors. We looked at many of them, but even if some of these factors are related, there are just too many of them that can potentially interact to explain the variance in this group, so that it would be hard to find such relations.

CK: Is there a desire to test athletes on the roads, where the terrain varies, as may the surface, corners, and camber?

WH: That would definitely be interesting, but at the same time would come with a lot of challenges. The benefits of our research-grade treadmill are that it is as rigid as a paved road and that we can control running speed. For road testing, it is more difficult to precisely control running speed between separate trials in different shoes. For metabolic energy consumption measurements, we also need to take average values over a longer period of time. A single corner or even a series of corners will have a very small effect on the average energy consumption.

CK: Any adjustments in lack of air to move through or is it balanced enough with tailwind and headwind changes likely to happen in a road event (with a circuitous or out and back route)?

WH: Some researchers like to put their treadmill at a 1% slope, based on a study comparing treadmill running and overground running in the ’90s by Jones and Doust (Andrew Jones more recently worked with Paula Radcliffe and Breaking2) but since the effect of air resistance depends on running speed and frontal area of the runner, I don’t think 1%-slope-for-all is necessarily better than the level-for-all approach. And the benefit of a level treadmill is that it’s very easy to make sure it’s level, and when doing biomechanical analyses, the physics add up. We developed a theoretical framework to translate metabolic savings in the lab into time savings in a race.

CK: In regards to diminishing returns — a mathematical perspective — for the faster runner, is that simply it or is there a possibility that the fastest runners typically have developed greater lower leg and foot strength, and better running economy than slower runners? So the running economy benefits are greater for a slower runner. Rather than simply a math question is it a physiological question with all sorts of variables?

In addition, even if everyone would get a 4% running economy improvement at any speed, that does not mean that they will all run 4% faster. How much time improvement one gets from 4% running economy improvement depends on how fast one runs. This is because running faster gets relatively harder the faster you run, partly because of physiology and biomechanics (we see this also on treadmills), partly because of air resistance (which we often forget about when focussed on lab studies that use a treadmill, but is a factor for overground running), which becomes more important at faster speeds.

CK: Have you explored the rate of recovery in super shoes vs. regular shoes?

WH: I have not. But Nike researchers presented some insights on this during the 2019 Footwear Biomechanics Symposium in Kananaskis.

(Apparently, the marathon finish time was not significantly different between groups (4:02:00 vs 4:35:00). Post marathon blood indicators of muscle damage and associated inflammation were lower in subjects wearing the Nike Vaporfly 4% shoe relative to the Nike Zoom Pegasus during a four-week training program and study.)

CK: Will you be testing newer shoes, as other companies besides Nike and adidas begin to improve their versions of super shoes? Additionally, there seems to be an advantage with Nike track spikes not seen by other companies.

WH: We have been working with Puma and Saucony. With the Endorphin Pro, Saucony had a super shoe before adidas; that was before we started working with them. Puma is rapidly making their way back into the running shoe market, with the Deviate Elite as their super shoe.  So far, in addition to Nike super spikes, the New Balance super spikes seem to perform really well, and in the next few weeks, we’ll see some other new super spikes from other brands that might close or at least decrease the gap with Nike.