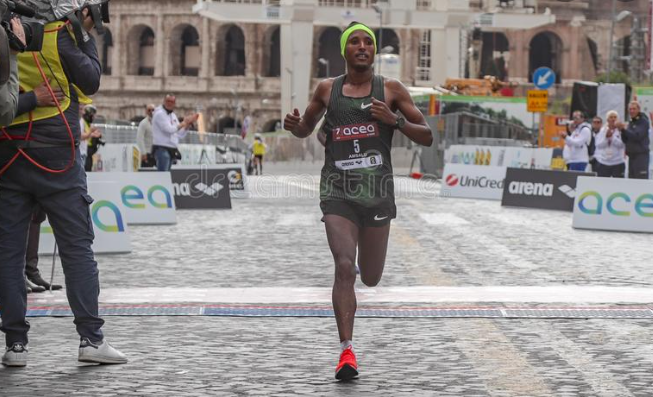 When Yihunilign Adane lines up against some of the world’s best marathoners at the TCS Toronto Waterfront Marathon on October 16th it will be with all the confidence of a man on a mission. He will also be carrying his country’s hopes.

Taking top honours in the 2022 Barcelona Marathon in a personal best 2:05:53 has that effect on a runner. The 26-year-old Ethiopian is experienced at the distance despite his relatively young age having turned to marathons shortly before he celebrated his 20th birthday.

“Winning Barcelona gave me huge confidence and motivation that I can compete against world-class athletes,” he says from his home in Addis Ababa.

“I watched the 2019 Toronto Waterfront Marathon when (fellow Ethiopian) Lemi Berhanu was second (in 2:05:09). I found out that Toronto is a fast course and, when my management raised it and asked if I wanted to run the Toronto Marathon, I did not think twice.”

The Toronto Waterfront course record (2:05:00) was a set by Philemon Rono of Kenya – who returns to defend his title and attempt his fourth Toronto victory. That is also the fastest time ever run on Canadian soil. Yihunilign has obviously been studying past results and feels he belongs at the front.

Until his Barcelona victory he was known simply as another good athlete with untapped marathon potential. He was 3rd in Lisbon a year ago (2:07:54) and in 2020 he placed 6th in the Dubai Marathon in what was then a personal best of 2:06:22. Before that, he succumbed to the lure of the money on offer running as many as four marathons in a year. Barcelona signalled a
new level.

That he turned to the marathon in the first place was unusual. Having been a member of Ethiopia’s gold medal winning Under 20 team at the 2013 World Cross Country Championships he originally aimed to become a 5,000m runner like his friend, Muktar Edris. The latter went on to become a two-time world champion at the distance.

“Once up on a time while we were running a cross country race at Jan Meda (site of the 2013 Ethiopian cross country championships) I was running 5th and Muktar was 6th approaching the finish line,” Yihunilign remembers. “Then he suddenly fell down and another athlete was approaching to take over. I helped Muktar up then I let him finish ahead of me. Edris was 5th
and I was 6th. Since then we have been really good friends.”

Ironically, it was an injury that saw him give up on his dreams of racing shorter distances like his hero Kenenisa Bekele, the former world 5000m and 10,000m record holder and three-time Olympic champion.

Finishing 7th in the 2015 World under-20 Cross Country Championships was a pivotal moment and when he is informed he beat a certain Joshua Cheptegei (Olympic 10,000m champion and world 5000m and 10,000m record holder) in that race he is astonished.

“Honestly speaking I do not remember I had finished ahead of Joshua Cheptegei as he was not famous then,” he laughs. “Unbelievable!  If I focused on track I would beat him even now.

Thanks to the achilles injury which forced me to run marathon.”

Confidence is surely not lacking here. A perusal of his personal best times reveals nothing extraordinary until one takes into account the limited competitive opportunities available to young African athletes.

“I know I would do better in short distances and I had the potential to do so,” he offers. “But I was suffering from an achilles tendon injury whenever I trained in spikes. I was comfortable training in road racing shoes. That was the time I decided to switch to the marathon as a result of the injury.”

Now he is thriving in a marathon training group.

“I was injured before,” he says, “but in the past few years my training has changed especially since I joined Moyo Sport and began training under coach Getamesay Molla. I train with world-class athletes like (2:04:02 marathoner) Leul Gebresilase and Jemal Yimer (Ethiopian Half Marathon record holder).”

A personal best seems tangible and if he is going to win the race he might well need an extraordinary leap because the field includes Kenyans Philemon Rono and Barselius Kipyego (holder of a 2:04:48 personal best) amongst others. Somehow, that might be just the motivation he needs.