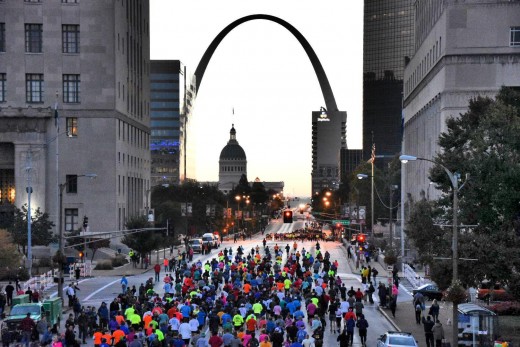 With views of the sun rising over the majestic Arch in front of them, thousands of runners took to the streets of Missouri’s largest city to run the fifth anniversary of the rungevity Rock ‘n’ Roll St. Louis Half Marathon presented by The Quinn Family Foundation.

Temperatures in the high 30s at the start were a bit cold for spectators, but the crisp autumn air was welcome for participants who rocked out to live bands along the scenic 13.1-mile course.

Zach Meineke was the men’s winner, coming across the finish line in 1 hour, 8 minutes, and 10 seconds. Fittingly, the Milwaukee, Wisconsin native was wearing bib number one and was happy with his improvement over last-year’s showing where he came in second.

Meineke says St. Louis is a great place to race since he can visit his in-laws at the same time. The 27-year-old is a new father and balances his time helping taking care of his young daughter, Eva, while training. “I had to get a treadmill,” he said with a chuckle. “It’s been a big adjustment. I’m getting a lot less sleep.”

Meineke’s wife, Martha, is a runner as well and clocked an amazing 1:39 half-marathon time on Sunday–a mere 10 weeks after giving birth to Eva. “I really like the course,” she said. “There are a lot of great volunteers out there.” Childcare is a team effort in the Meineke household “Zach is a physical therapist and I’m a full-time PhD student, so we take turns,” she said.

Zach admitted it was strange to be out in the lead the entire race since he was second last year and had to spend his entire race trying to reel in the winner. But his solitary lead on Sunday gave him plenty of opportunity to take in the St. Louis scenery. “It was really nice to see the sun coming up through the Arch today,” he said. “It’s a beautiful course.”

The women’s race went to Anissa Angelosante of Columbia, Missouri. The 28-year-old ran 1:19:53 and gapped her rivals by nearly two minutes.

“I think this race is awesome, “she said at the finish. “I’ve always wanted to run a Rock ‘n’ Roll event. It was super exciting. I kept telling myself that I could win this. At the water stops there are great cheerleaders who helped me out along the way.”

Besides the half marathon, St. Louis celebrated other races this weekend, including a 10K. Fifty-four-year-old Tim Francis of Rock Port, Missouri, showed that age is just a number by breaking the tape in it with a 36:39. Second and third place were awarded to Rodney Radcliffe (40:24) and Tim Melly (41:38) respectively. Michele Marcus won the women’s 10K, clocking 44:56 for the 6.2-mile race. She was trailed by Angela Sabo (45:15) and Chelsea Klunick (47:06).

Sunday was a busy day for the Rock ‘n’ Roll Marathon Series. Besides St. Louis, runners turned out in Lisbon, Portugal and Denver, Colorado as well.

The event once again featured two days of running with the Rock ‘n’ Roll St. Louis 5K on Saturday. Participants that ran the 5K and any distance on Sunday took the Remix Challenge and earned a third medal in addition to each race’s finisher medals.