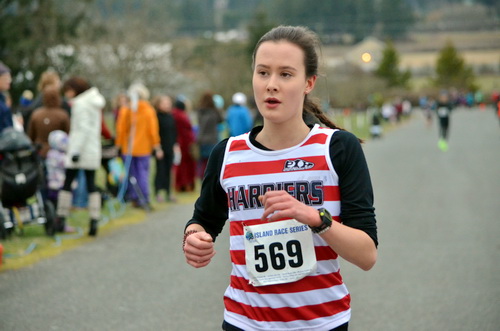 The 2017 BC High School Cross Country Championships took place Saturday, Nov. 4 at Vancouver’s Jericho Beach. The conditions were vastly different than one week prior at the BC Club Championships. At Jericho Beach, it was 20 degrees cooler with snow falling throughout the day.

Seven days earlier, across town, in Abbotsford’s Clearbrook Park, the temperatures had reached 20 degrees; there was not a cloud in the sky and a complete lack of wind. Clearbrook’s course is mostly flat and in dry conditions provides a similar experience to road racing. The 2K loop course is slightly short (which is okay in cross-country according to the IAAF); so many athletes came away feeling as if they were ripping it up out there.

In the senior boy’s high school race, the Wyatt twins controlled everything, the pace, the changes – sitting-in-the-pack and surging as well as finishing, as they crossed the line going 1-2.

Zach and Tate Wyatt of R. E. Mountain located in nearby Langley had a plan going in and executed it like surgeons.

They ran three laps of the 2.3K per lap course at Jericho Beach, finishing in 23:18 and 23:19 respectively. Aidan Doherty of West Vancouver Secondary finished third in 23:19. It was a great race for Doherty who went in hoping for just a top-10 finish.

“I am really happy with the result. The Wyatts really controlled the race, but I stuck to my plan and picked off guys throughout, I am pleased with third for sure,” said Doherty.

“We had a tactical plan going in and we feel we executed it well,” shared Zach. “I hung back in the pack after the first lap after sharing the lead, and then we went for it late in the race.”

During the senior girl’s race, Oak Bay High’s Justine Stecko and Grace Fetherstonhaugh of New Westminster Secondary led side-by-side for the first lap. Then starting the second lap of the two-lap race, Stecko increased the pressure and continued to pull away throughout, getting a commanding win. She looked relaxed breaking the tape in the time of 17:01, just as she had two weeks prior in the Island Zone championship win. Fetherstonhaugh crossed the line in the time of 17:23.

“I don’t run competitively, so I am really happy finishing third. Makes me want to try out the club scene to see how I do,” said McCabe, who had to get ready for a soccer game. She also plays basketball.

“I am happy with the result. I think last week at club provincials I had put too much pressure on myself,” said Stecko.

Stecko had jumped into the senior race at club provincials and was racing the likes of Rio Olympian and Canadian record holder Natasha Wodak as well as top Canadians in Lindsay Carson, Lisa Brooking and Rachel Cliff as well as Scot, Sarah Inglis.

Fetherstonhaugh had a great race in the F17 division at club provincials. Both will be competing in Kingston at the national club championships on Nov 24.

Matti Erickson won the boys junior race – also a two-lapper. He finished in 17:26 in an exciting duel with Nanaimo’s Keaton Heisterman, who a month earlier told his father that he wasn’t going to go out for cross-country. He was happy he went through with it.

Judah Moar of West Point Grey Academy finished third. Heisterman and Moar finished in the time of 17:35 and 17:40.

The day started off at 9:30 am with the Paralympic race, which was won by Brandon Vanderluit of Lord Byng.

A total of 993 runners finished the five races.