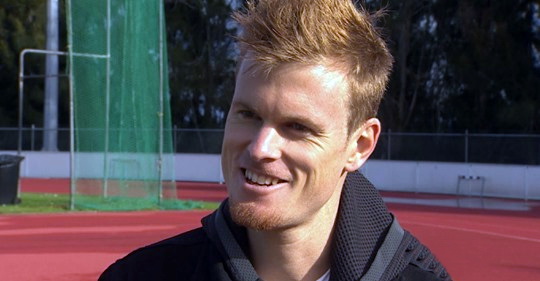 While the brothers Robertson, Jake and Zane, are re-writing the New Zealand athletics record book, the latest, by Zane was bittersweet. He was expecting to go a little faster than he did in his debut marathon, yet managed to take down the national record by seven seconds.

Twin brother Jake owned the record before him.

On Sunday, in the Gold Coast Marathon, Robertson finished in the time of 2:08:19.

“Unfortunately, the weather was a limiting factor,” said Robertson.

He told Athletics Illustrated, “The marathon is a completely different event and I knew it. I had confidence because of the training I had done in Ethiopia. I had been doing great sessions and long efforts that suggest a time around 2:05 to 2:06.”

According to the IAAF scoring tables and based on his half-marathon best of 59:47, Robertson should be able to run a 2:05:39; but debuts are different.

He was in good company though. For example Haile Gebrselassie’s debut of 2:06:35 was done in more favourable conditions as was Sami Wanjiru’s 2:06:39; two iconic marathon runners.

Robertson plans to run the Doha World Athletics Championships marathon that takes place on Day 9 of competition on October 5, 2019. In advance, his plan is to spend plenty of time in a hot environment to prepare for the conditions – heat acclimatization.

With the world championships in October and the Tokyo 2020 Olympics taking place next summer, this will be an important aspect to his training.

The fastest marathon event in the world is likely the Berlin race that takes place in September each year. Twelve of the 27 all-time fastest results have been run in Berlin including the latest two world records of 2:01:39 as set by Kenya’s Eliud Kipchoge last year and 2:02:57 by fellow countryman Dennis Kimetto. Eight of the top-15 times have been run in Berlin and that includes two Boston Marathon performances. Boston is not a certified course according to the worldwide governing body.

“I have no interest in running the Berlin marathon currently. I’m always interested in racing where the organisation has an appreciation for me being there. I feel Berlin will care about the other big names. I like being in a race where I feel I have the chance to win and race well and to run fast. In a World record attempt (that they always seem to have going on), I don’t feel I have that chance in that marathon.”

There are plenty of other fast marathons including Rotterdam, Tokyo, Fukuoka, Chicago, Paris, and London, which is home to the second and third fastest performances, all-time – a 2:02:37 by Kipchoge this year and 2:02:55 by Mosinet Geremew of Ethiopia who finished second to Kipchoge in April.

“I think I can run at least a 2:04 at some point in the future. With great weather, meaning no rain, less humidity, no wind, a larger group around me and the pace being faster from the start, you know, all the little things, I can do that,” said Robertson.

They will continue to re-write the record book.