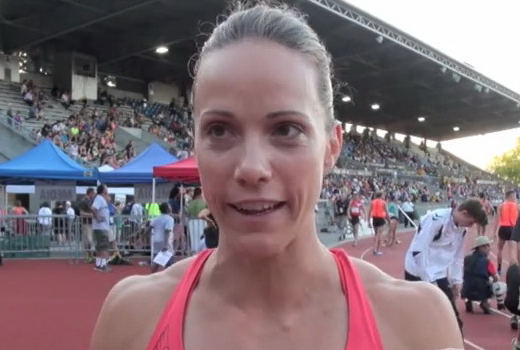 Jessica Zelinka of London, Ontario is Canada’s best Heptathlete. She holds the Canadian record with a performance where she amassed 6490 points during her fifth place finish at the 2008 Beijing Olympic Games.

She earned a gold medal at the 2007 Pan American Games and silver at the 2010 Commonwealth Games. She has won gold at the Canadian Championships five times.

Zelinka will be competing in the IAAF World Track and Field Championships in Daegu, Korea

I had the opportunity to interview Jessica three times, once in June 2011 before the Victoria Track Classic, which is one of the meets in the brand new National Track League. Twice we interviewed in July 2011, one on video and another written interview. The following is a combination of the three.

Christopher Kelsall: What are your thoughts on the new, National Track League?

Jessica Zelinka: I think it’s great! Super-great! I don’t get a chance to compete a lot throughout the year since I’m a heptathlete, so it’s nice to stay close to home and have a series of meets back-to-back where I can do individual events. It’s actually really perfect for me.

CK: Where does the Victoria Track Classic rank for you as a place to compete?

JZ: Victoria is a well run meet and well organized. They put the athletes first. I brought my daughter last year and she loved the bunnies on campus! Victoria is beautiful and I always look forward to the ferry ride from Vancouver.

CK: Were your childhood days filled with sports?

JZ: I was the youngest of three girls. We were all very active and involved in sport growing up, especially school sports. Being the youngest, I kind of just followed the footsteps of my sisters. A part of it to, I’m sure, was that my mom couldn’t have driven us to 3 different venues at three different times! Our first sport our family was very involved in was figure skating, and precision skating (yes, kind of like the can-can on the ice, but more athletic, and less show-girl). Track was our family’s next gig, and we rode that one from elementary through high school and university…to now (for me obviously) but even my sister Deanna is still in track throwing javelin.

CK: Your daughter Anika is three years old, yes? Do you get to take her traveling much while you compete?

JZ: She just turned 2 at the end of May. She travels mostly when I go to training camps… since I’m gone for a longer period of time. We usually can rent out a condo for the couple of weeks and I can get into a comfortable schedule of training hard. My husband, Nathaniel, usually attends these training camps with us and so it becomes a family affair. I usually don’t bring her to my track meets since they’re mostly over-seas, and I’m not away for too long, and I only have a few in the entire year being a multi-event athlete.

CK: Your husband Nathaniel, I understand is an international-level Water Polo player. Have you entered the pool and played water polo to see what his sport is all about?

JZ: Nathaniel competed in Beijing (Olympics) on the Canadian team, which was an amazing experience for both of us to share together. I have tried throwing the ball around in the pool (without another player wrestling me and trying to drown me at the same time). I have no talent in the pool what-so-ever. For example, my swimming was at its best when I was 9 months pregnant. I really have no concept of how difficult water polo is, because I can’t even tread water for the duration of a quarter!

CK: OK I have to get this question in. I remember years ago watching a Canadian Game Show (I am not going to say which) where the trivia question involved the rock group “ZZ Top” (Zee Zee). The show host referred to the band as “Zed Zed Top”. It was awkward. Anyone ever address you as ”Jay Zee”, or worse, “Jay Zed”?

JayZee: Yes – Jay-Z (not Jay-Zed, though I sometimes make reference to this Canadian-ism). It was more of a high school track nick name. Perdita (Felicien) is already in on it, since we’ve been working together. My real track nick name is “puppy Tiger” (thanks to Coach, Les). Some people feel uncomfortable calling me puppy, so “Jay-Z’s” a good back-up option.

CK: Being an experienced international competitor and Olympian, how do you keep motivated for domestic events?

JZ: I find Nationals to be the more difficult event to get on my ‘A game’ for, mainly because I have to go through the entire heptathlon which is tiring in itself. My score doesn’t get counted for the IAAF Combined Events Series (but US Nationals does), so my score isn’t so important as using the opportunity to work through some things and work on my, getting into the zone – even when the stakes are not as high.

CK: Your best point total was 6490. What sort of things have to happen to have a day like that?

JZ: My head space was great during those two days at the Olympics. Basically the attitude I had was a “yes” attitude, so whatever was happening or might happen, I took a “no problem” approach. Kind of like somebody trying to ruin an overly positive person’s day – not going to happen. In my case, I wasn’t overly positive, just calm, confident and had the tools to deal with any potential distractions,

JZ: Ruky did not directly “upset” me at Nationals by winning and performing a personal best. Although I was a bit upset with myself by not being able to pull through with some solid performances to secure the title. Heptathlon is all about ups and downs throughout the 2 day period. Ruky succeeded better at managing those ups and downs than I did, and that’s the name of the game. So out of respect for the event, I believe that Ruky earned the victory on those 2 days.

CK: Having two top-level Heptathletes at the Worlds should make for an exciting competition within the competition. Perhaps Ruky will provide even greater motivation?

JZ: I’m really looking forward to competing at Worlds this August. My training has been going very well and I believe I can get a great performance in for these championships. It’ll be nice to have a fellow Canadian heptathlete around – a familiar face – but having Ruky there will not make a difference in my performance.

CK: You and I were joking in a recent interview in Victoria about coach, Les Gramantik teaching you how to lean in the sprints, as you missed out on some prize money because of not leaning in the 100mh. You have been at this for half your life – since you were 16. Ok, do you have it now; lean at the tape!

JZ: Ok, first of all…you know that there’s no tape. I’m a visual person… if I saw tape at the finish line, I would try to lean at it – that’s a given. I’m a heptathlete, and good or bad, sometimes beating the person next to you by 0.01 sec makes no difference in points. That being said, I’m very competitive and if I knew 0.01sec would give me some extra cash for a nice piece of red organic meat for my 2-year old daughter – watch out… mama instincts would have kicked in! I guess what I’m trying to do is avoid answering the question, because YES, OF COURSE I should know by now to lean at the LINE (not tape)!

CK: Speaking of close finishes, you ran 1/100ths of a second outside Athletics Canada’s A standard for the 100mh during your heptathlon at the 2008 Beijing Olympics. Hurdles seem to be your best event. Has the thought ever crossed your mind of going for the A standard to compete internationally as a hurdler?

JZ: Not really, well…not until recently actually. I do heptathlon because I love the training, I love the variety, the change up and pretty much everything about it that would be the opposite of focusing on one event. I’m the type of person that likes structure, and some routine, but needs for it to change often. Doing hurdle training every day would make me go insane! The only reason it has crossed my mind is that it could prolong my track career. Realistically, I would need to train less hours, I could go do a series of meets back-to-back-to-back and could make some easy dough (compared to only competing in a few heptathlons a year, and usually these meets are packed with only the best in the world, all scrambling for every last penny).  In the end, it would have to come down to how much I’d still be enjoying and loving being at the track and doing what I’m doing. There’s only one reason I do heptathlon: because it’s one of my passions. If I choose to focus on hurdles one day, it’d have to be for the same reason. Ya never know… can you fall in love twice in the life-span of a track career?

CK: I don’t know, ask Carl Lewis. At the 2010 Commonwealth Games in Delhi, India, you got the dreaded, “Delhi Belly”, despite this, you managed to win the silver medal – a consolation prize for all of your 20m sprints to the washroom. Are you packing your own food for the 2011 IAAF World Track and Field Championships in Daegu, Korea?

JZ: No, I’m not like that paranoid. You have to be smart, and chose what you eat wisely. I take my nutrition seriously, and if I ever thought that my performance would be hindered because of it – I would do something to prevent it. In Delhi, you basically have a 50/50 chance of leaving the place without experiencing (on some level) the “Delhi Belly”.  I was just happy it wasn’t so bad that I couldn’t compete. That being said, I actually do always pack some food when I go on trips, but nothing I would need to depend on to get my full caloric intake for a day or a week! I wouldn’t have done anything differently in India – maybe just packed a super-powerful probiotic,  but even then the dreaded “Delhi Belly” probably would have no mercy!

CK: How confident are you now being so close to the World’s?

JZ: I feel great at the moment. We were able to push through two major high volume weeks, without many – or really any setbacks. It basically told us that I’m in great shape and responding well to the training. I also have an excellent group of therapists that have been working hard to keep me together, which can’t be overlooked. From This point on we get to enjoy the ride… The hard work’s been put it, now it’s tune-up time before the gun goes off!