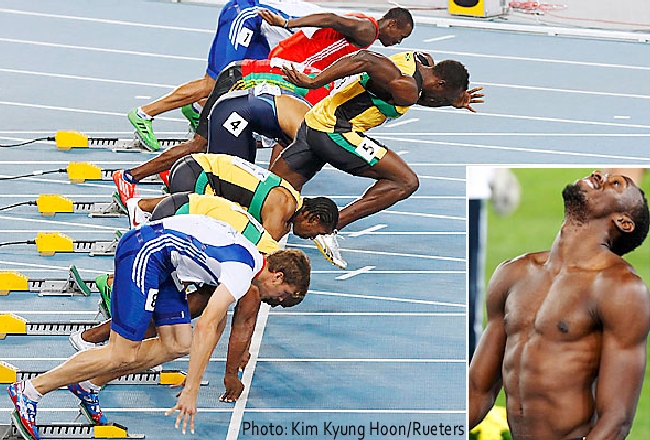 The  current zero-tolerance false start rule for the sprints is an abject failure in marketing and will only serve to further alienate fans of the flagging sport of track and field. The 2012 London Olympic Games are just days away and the International Association of Athletics Federations has not addressed this austere rule, despite having faced substantial pressure after the 2011 World Track and Field Championships debacle that took place in Daegu, Korea. There remains every chance that fans of the sport could witness a repeat disqualification of Usain Bolt, the most marketable personality at the Games.

The purpose to bringing in the zero-tolerance rule on January 1st 2010 was to serve television. Television executives hated the delays that false starts created. So the rule was brought in to eliminate the long deferments (ten minutes was not unheard of) by having absolute zero tolerance. Ironically, the rule only served to bite the executives in the ass; they lost the most marketable face at the IAAF World Track and Field Championships when Bolt false started, ouch.

The new, zero-tolerance false start rule came into effect following approval of the decision at the IAAF Congress in Berlin in 2009 in which federations voted 97 to 55 in favour of “except in combined events, any athlete responsible for a false start shall be disqualified”.

Fans do not watch the Olympic 100m final to see second best win because of a disqualification to the best athlete. They want to see a race that includes the best: may the best man (or woman) win. The IAAF should have addressed the false start rule, when they had the chance. They should have changed it back to the way it was, to where the first false start counts against the entire field, regardless of who commits it and then the second false start goes against the individual perpetrator; TV executives be damned.

At the 2012 Canadian Track and Field Championships, Canada’s current record holder in the 100m hurdles Perdita Felicien, false started. She ran under protest and finished third, showing great composure in doing so. In 2011 when Bolt was disqualified in Daegu, Felicien said, “I’m so worked up. I don’t like the rule. I never liked the rule”.

Coe said, “The issue is very simple for me. You have to be consistent. You have a rule and you don’t suddenly revisit it because a high-profile athlete has fallen foul,” he also said. “I’d rather not have Usain false start in London. But the start’s not separate from the race; it is part of the race. It’s not a technical nicety. It’s part of the sport like a knockout punch in boxing. You pay to watch a title fight in Vegas knowing that a fighter might get knocked down in the first round.”

The knockout punch in boxing is not equal to a false start in sprinting. This is a ridiculous comparison. A powerful start does not guarantee a win; a knockout does. The knockout punch in the 100m final, is akin to crossing the line first, nothing more. Additionally, the International Olympic Committee often changes the line-up of events that are to be included from Olympiad-to-Olympiad, to serve television and marketing; remember the decision to add Rhythmic Gymnastics? How about the new Synchronized Diving? So the notion that you do not change the false start rule for consistency sake is inherently wrong. You change the false start rule, so to not further alienate the flagging numbers of fans of the sport of track and field. The current rule fails current and potential track fans. This is the biggest stage in which to win fans over, why not take advantage of it?

When sprinters are positioned in the starting blocks they are on knife-edge, a cough from the spectators could cause one to leap forward cat-like. Sprinters train for years or even decades to make it to the final of a major championships. Key elements to a great performance include powerfully bursting from the blocks, the acceleration phase to 30m, velocity phase 30m to 60m then maintaining as much speed as possible after 60 or so metres, to the finish line. Often a good lean is important. A sprinter’s fine hair trigger is an indication of fitness and great power that is stored and waiting to be unleashed. To disqualify the most ready athlete against one of the very reasons why they are ready in the first place is wholly wrong. The sprinter’s power and fine hair trigger should be rewarded, embraced and marketed.

The IAAF came under great pressure to change the rule after the 2011 World Track and Field Championships, but acquiesced. Should Bolt false start during the Olympic Games, the IAAF will face a firestorm. For the greater good of the sport, sprinting may need a martyr; someone with a recognizable name may need to false start. Perhaps several athletes will, then the IAAF can put an end to this ridiculous and draconian rule that serves only to benefit a few TV executives and potentially alienate a billion or two television viewers.