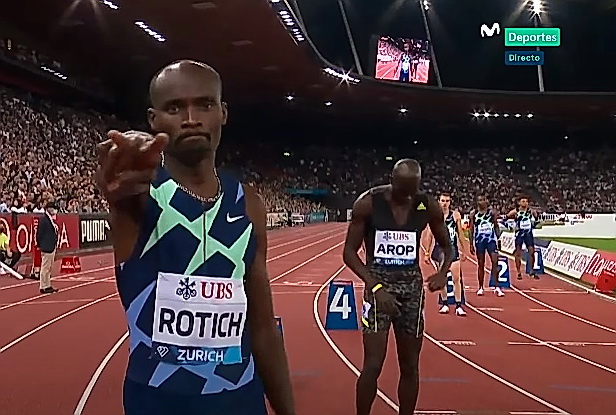 Christine Mboma of Namibia was one of the primary highlights of the Wanda Diamond League finale, Thursday in Zurich, Switzerland. The teen won the 200m event improving her own world U20 and national record to 21.78 seconds. Her previous best was 21.81 from the Tokyo Olympics earlier this summer.

For Shericka Jackson, it was another strong showing for the Jamaican. She has been finishing in third or second place all summer long including this race, where she clocked a new personal best of 21.81 seconds ahead of third-place finisher Dina Asher-Smith of Great Britain who stopped the clock at 22.19.

For the 19-year-old Mboma, the performance was also a European record. There is much more to come from this athlete.

It was a border war with the US going 1-3 and Canada 2-4 in the half-lap sprint.

American Kenneth Bednarek took the men’s 200m race over Canadian Andre de Grasse, who had dominated the distance all summer including earning the gold medal at the Tokyo Olympic Games. The two finished in the time of 19.70 and 19.72, respectively. Fred Kerley from the US clocked a 19.83 to take third. Canadian Aaron Brown took fourth in 20.13.

The 22-year-old Bednarek had clocked a 19.68 in Tokyo to take the silver medal. De Grasse, for this third medal of the Games, ran 19.62, for the 26-year-old’s sixth Olympic medal overall, between Rio and Tokyo. Kerley did not compete in the 200m in Tokyo but did earn silver in the 100m event in the time of 9.84.

Keely Hodgkinson continues to roll. While many athletes competing on Wednesday and Thursday seem to have come to the end of the long summer track season, not at their peak, the 19-year-old grasped another victory. This time she clocked a 1:57.98 performance. The Briton bettered American Kate Grace, who recorded a strong 1:58.34 performance. And Natoya Goule of Jamaica took third in a photo finish tie with Grace.

Hodgkinson is one of the players in the apparent 800m youth movement. Athing Mu of the US is the other, but she wasn’t in the race Thursday. The two 19-year-olds have changed the way the 800m is run. Traditionally, it has been the only track event where athletes take the first lap faster than the second. Not these two. They ran a negative split race in Tokyo to take gold and silver.

Finally, American, Clayton Murphy, finished top-three, after finishing mid-pack nearly all summer long. It is one of the final opportunities to race as the track season gives way to the upcoming cross-country and marathon seasons. He finished third with a solid, but not brilliant time of 1:45.21 — he will take it.

Murphy was bettered by the Tokyo Olympic gold and silver medallists in Kenyans Emmanuel Korir 1:44.56 for the win and Ferguson Rotich taking second recording a 1:44.96 performance.

Poland’s Patryk Dobek took third in Tokyo but wasn’t in the race on Thursday. Murphy had finished in the time of 1:46.53 and in last place in Tokyo. He has raced several Diamond League meets to try to redeem himself. It hasn’t been the season he was looking for, however, Thursday’s race was a strong showing to end the season on.

Zurich was the final and 13th meet of the annual Wanda Diamond League series.