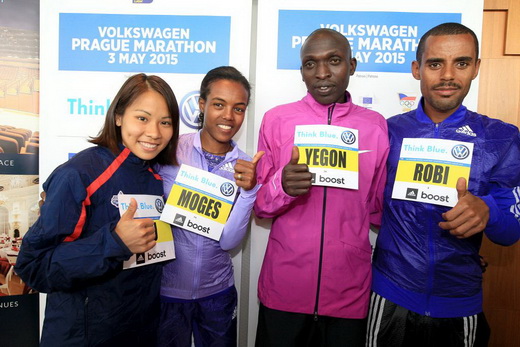 Kenya’s conveyor belt of world-class runners produced yet another new name in 2015 as Geoffrey Ronoh became last year’s rising star. Signed as a pacemaker in the Mattoni Olomouc Half Marathon, he famously snatched victory, leaving behind superstars Wilson Kipsang and Dennis Kimetto. If Ronoh can transform the kind of form he showed last summer onto the marathon distance then he could produce some performance in Sunday’s Volkswagen Prague Marathon. While possessing to date a modest personal best of 2:15:51, Ronoh is justifiably considered one of the favourites. However, the fastest runner in the field has a PB that is almost ten minutes faster than Ronoh’s:

Ethiopia’s Deribe Robi ran 2:06:06 in Dubai earlier this year and leads a field of nine sub 2:10 runners in Prague. As for the women’s race, Ethiopians are expected to lead the chase for the title. Five of them show personal bests of sub 2:25 and Koren Jelela is the fastest of this quintet with 2:22:43.

The Volkswagen Prague Marathon had its inaugural edition exactly 20 years ago. The race has developed into one of the world’s best quality marathon events and is an IAAF Gold Label Road Race. While 985 marathon runners competed back in 1995 this year organisers have once again a capacity field of 10,000 entries. Bib numbers sold out already half a year ago. “The Volkswagen Prague Marathon is an unbelievable success story. I have to thank all those who made it happen,” said the President of the organising team, Carlo Capalbo, who initiated the RunCzech Running League. Seven races spread through the Czech Republic registered 70,000 runners last year. “In total RunCzech has now had 770,000 runners within 20 years – we can be really proud of this,” said Capalbo.

While defending champion Patrick Terer had to cancel his start due to an Achilles tendon injury there still is a former winner in the elite field which remarkably comprises 15 different nationalities: Nicholas Kemboi won the Volkswagen Prague Marathon two years ago in warm weather conditions, beating Patrick Terer and other top class runners with 2:08:51. The former Kenyan, who now competes for Qatar, features a personal best of 2:08:01.

However there are half a dozen athletes in the field who have run faster than Kemboi. One of them is Deribe Robi of Ethiopia. The 24 year-old improved to 2:06:16 for a third place in Dubai this January. “If we get good help from the pacemakers then I hope to further improve and may be I can even break the course record,” said Deribe Robi. The fastest time ever run in Prague stands at 2:05:39, set by the then little known Eliud Kiptanui in 2010.

Gilbert Yegon is the other sub 2:07 marathon runners in Sunday’s field and he also has a sub 2:06 time in his mind. “I would like to go for a personal best and the course record,” said the Kenyan, who clocked a PB of 2:06:18 back in 2009. Last year’s marathon performences showed that Yegon is back in peak form. A year ago he took the Duesseldorf Marathon in driving rain with 2:08:07, followed by third place in the high-class Frankfurt race in October with 2:07:08. Three weeks ago Yegon ran in the Rotterdam Marathon. “But I got a back problem early in the race and dropped out after 17 k. It is all fine now, I got good treatment in Kenya and was able to train without problems,” said Yegon.

Ethiopians Kebede Teferi and Hailu Mekonnen, who both have personal bests of 2:07:35, as well as Kenyans Nicholas Chelimo (2:07:38) and Evans Chebet (2:07:46) are further contenders for victory in Prague. And then there is of course Geoffrey Ronoh, despite being number 18 on the start list for lifetime best times.

Ronoh has only had one race at the classic distance so far. In January 2013 he was sixth in Ahmedabad in India with 2:15:51. Last year he achieved his breakthrough when he took the Olomouc race. “I remember what the races in the Czech Republic brought me last year, now I want to discover my potential on the full marathon in Prague,” said Geoffrey Ronoh, who also won the Birell Prague Grand Prix 10 k race in September with a fine 27:28.

Apart from Boston, no Kenyan woman has won any of the major international spring marathons so far, a rare occurrence on the international circuit. This pattern looks likely to continue in Prague on Sunday. Athletes from Ethiopia took the honours in London, Paris, Hamburg as well as earlier this year in Dubai and Tokyo. On Sunday they are the favourites in the Volkswagen Prague Marathon.

While Korean Jelela is the fastest on the start list with a personal best of 2:22:43 from 2011 four fellow-Ethiopians have shown excellent marathon form as recently as January. Tadelech Bekele and Ashete Bekere both improved in Dubai to 2:22:51 and 2:23:43 respectively while Yebrgual Melese ran a PB of 2:23:23 in Houston. Betelhem Moges clocked a personal record of 2:24:24 in Dubai.

Moges, known as Betty in her training and management group, will turn 24 on Sunday, has already triumphed on three occasions in the Run Czech series. She was the winner of the Mattoni Olomouc Half Marathon and the Mattoni Usti nad Labem Half Marathon in 2013 and last year’s Mattoni Ceske Budejovice Half Marathon as well. “I hope to break my personal best on Sunday. This race is probably the last opportunity to get into the Ethiopian team for the World Championships in Beijing this summer. I would like to qualify for the championships,” said Moges.

A strong challenge could come from a European athlete: Sara Moreira of Portugal ran an outstanding marathon debut last November in New York, finishing third with 2:26:00. If she is in similar shape on Sunday, Moreira might well surprise her African rivals.