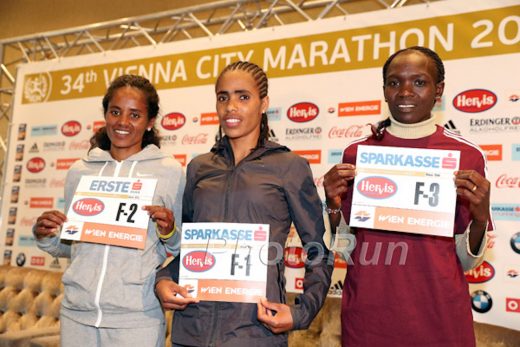 A year after battling high winds during the Vienna City Marathon Shuko Genemo is back in the Austrian capital. Despite the severe conditions in 2016 the Ethiopian won the race with a personal best of 2:24:31. Now she hopes for better conditions this time to further improve her personal best. However a possible attack on the course record of 2:23:47 might again depend on the weather. The Vienna City Marathon, which will see its 34th edition on Sunday, is an IAAF Gold Label Road Race.

„I want to run faster than last year,“ said Shuko Genemo during today’s press conference. An improvement by the 21-year-old Ethiopian could finally bring down the course record of the Vienna City Marathon which stands for 17 years. Back in 2000, Italy’s Maura Viceconte clocked 2:23:47. Shuko Genemo’s trip to Austria began with a huge surprise when she came off the plane: „It was the first time in my life that I saw snow!“ Luckily this experience will not last long. Most of the snow that caught Vienna on Wednesday has already melted away and the forecast indicates a significant improvement for Sunday. It should turn sunny but it could be below 10 Celsius at the start. The main weather threat might again be the wind. However, it should be far less strong than a year ago.

While youngster Shuko Genemo hopes for a personal best and another win in Vienna there is one runner with a superior PB in the field: Fellow-Ethiopian Meseret Mengistu took the Paris Marathon with 2:23:26 in 2015. She has already won another marathon this year when taking China’s Xiamen race in 2:25:58 in early January. However, Mengistu was a bit reserved when asked about her goals for Sunday’s race. „I had a foot problem during the build up for Vienna. I am fully recovered and ready to go, but I don’t want to make any predictions,“ said the 27-year-old.

There are three Kenyans in the race who could challenge Genemo and Mengistu on Sunday. While Nancy Kiprop and Rebecca Chesire both feature personal best of sub 2:26 Angela Tanui is a debutant. She features a half marathon PB of 67:16 and showed fine form earlier this year. While Tanui hopes to run a good debut Nancy Kiprop targets a personal best. „My aim is to improve by one to two minutes on Sunday,“ said the 38-year-old Kenyan, who clocked her PB of 2:25:13 when taking second in Valencia in November last year. She combines training with a job as a teacher and hopes to open a school in the future.

Asked about the rivalry between Kenyan and Ethiopian runners Nancy Kiprop, who adopted five children when she was a young woman and in the meantime has another two of her own, answered: „I don’t think there is that much rivalry in the marathon. Because of the long distance there always is some cooperation.“ However, Shuko Genemo had a different view on this: “There is always rivalry, it is a competition and all of us want to win.”

There will be less rivalry when Estonia’s triplets Lily, Leila and Liina Luik will participate in the new 10 k race staged on Saturday. While the event includes the Austrian championships at the distance the Luik triplets are the only invited international athletes to mark the start of the new event.