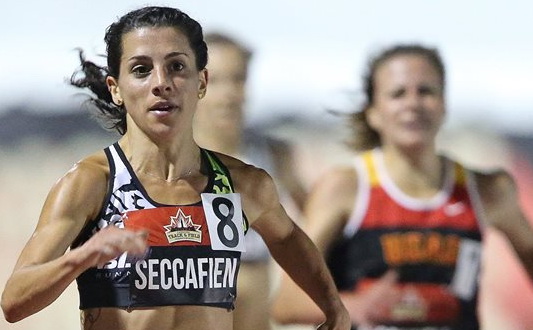 A few of the names include 2016 Rio Olympians Natasha Wodak and Jessica O’Connell as well as Rachel Cliff, Kinsey Gomez and Sasha Gollish.

Unfortunately for Gollish, she hadn’t.

“I am happy for Jess and Andrea. And congratulate them on their golden tickets,” shared Gollish. “While I’m disappointed in how I ran – and overall with my season – I know that all the fitness is still inside my legs and I’m excited about the future.”

Seccafien was pleased with her controlled effort.

“It was a great race and I really commend Natasha Wodak and Kinsey Gomez for doing much of the front running and getting it going a little bit,” shared Seccafien. “I was able to execute my race plan and stay relatively relaxed for much of the race until Jess and I had, what I hope was, an exciting battle in the last 800m.”

They ran the final two laps in under 2:15 and 2:16, which was the fastest portion of the race.

“I’m really happy to have defended my title and look forward to racing again in Ottawa next year.”

The national record was set in 2003 at the Paris world championships by Courtney Babcock in 14:54.98

The world championships are taking place in London, UK, Aug. 4 to 13.

Seccafien and O’Connell will race the heats on Aug. 10, which will be day seven and should they make the final, it will take place on day 10, the final day of the meet.

Wodak owns the national record of 31:41.59 and along with Marchant are Rio Olympians. Cliff had narrowly missed qualifying for Rio on a technicality.