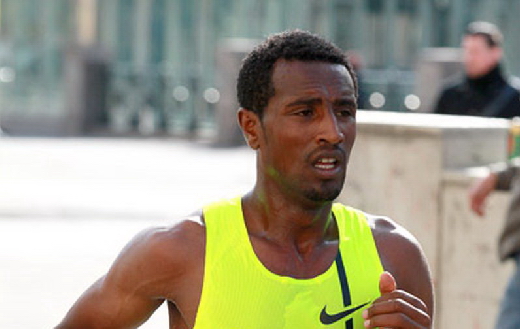 Sisay Lemma Kasaye, winner of this year’s Vienna City Marathon, and his Ethiopian compatriot Koren Jelela Yal are two high quality late additions to the elite field for the Frankfurt Marathon on Sunday, October 25. Both athletes will be contenders for top honours in the race beside the River Main. Entries for the Frankfurt Marathon, which has an IAAF Gold Label, the highest category awarded to an international road race, are still open and can be accessed at: www.frankfurt-marathon.com. The race organisers expect approximately 15,000 participants.

All the signs from his career so far are that Sisay Lemma can produce a special performance in the Frankfurt Marathon. The Ethiopian, who began his career at the age of 17 running barefoot for lack of running shoes, achieved a breakthrough this year after he had already impressed by winning the Warsaw Marathon with 2:09:02 in 2013.

He began 2015 in fine style with a fifth place and a big improvement on his personal best with 2:07:06 in the traditionally high quality Dubai Marathon in January. This was just the beginning to a year which has already indicated his ability for the big occasion. Vienna in April was the setting for the biggest victory of his career so far. “If it hadn’t been windy and had I been put under more pressure from my rivals, I could have run 2:05,” reflected Sisay Lemma after he broke away from the field at 27 kilometres and won by almost five minutes in 2:07:31. Frankfurt could mark a major step forward as Lemma targets Olympic qualification for Rio next year. He’ll certainly have plenty of African rivals to spur him on in Frankfurt as well as Arne Gabius, who will be aiming for the German record of 2:08:47.

Another addition to the elite start list is Koren Jelela, a proven performer of world class, who has returned to top flight competition after maternity this year. The goal in Frankfurt for the 28-year-old Ethiopian will be to regain the level of her past performances where her best stands at 2:22:43 in winning the Toronto Marathon in 2011. This performance ranks her as the fastest woman in the field. Other notable successes include winning the 2011 Mumbai Marathon and the Istanbul title a year later. She also finished third in Paris in 2011.