Two of Canada more capable track athletes failed to declare to Athletics Canada that they intend to compete in the 2015 Toronto Pan American Games, so they are not going.

Declaring one’s intentions is a must-do step in the qualification process. In the case of 400-metre hurdler Fawn Dorr, she simply forgot, that’s her problem. In the case of Langley’s Fiona Benson, she wasn’t running anywhere near fast enough to qualify for the 800-metre event, so it simply did not occur to her to be aware of the policy.

That is, until one month after the May 1st declaration deadline passed. Benson went from being a respectable 2:08.54 university level runner to being Canada’s fastest in one night, then she did it again three more times over the next two weeks, in an eye-popping demonstration of a breakthrough.

Canada’s legendary 1500m runner, Kevin Sullivan, now Men’s Head Coach at the University of Michigan said, “If an athlete who had a reasonable expectation to make a team simply missed a deadline then that is on the athlete for not being more diligent in following the posted protocol. If it’s a situation where an athlete did not have a realistic expectation to make a team and therefore did not submit a declaration and subsequently had a breakout season then Athletics Canada should be allowing that athlete an opportunity to declare for a team past the deadline. At the end of the day Athletics Canada’s responsibility is to put the most competitive team on the track. The declaration date should have been later with the June 14th selection date.”

For Canadian athletes wishing to compete in global championships like the Commonwealth Games, IAAF World Championships (which include separate indoor, outdoor, mountain and cross-country championship events) and the Olympic and Pan American Games, there are several steps to take to earn nomination to the team.

Typically, a minimum distance, height or time must be achieved or in multi-sport events such as heptathlon and decathlon, a certain number of points must be accumulated during a single competition. Achieving these minimum benchmarks within a qualification window of time is the obvious hurdle towards qualification, however, there are several other tasks to check-off the to-do list before earning the nod.

The rest of the to-do list amongst other items typically includes submitting a training plan for a certain period of time, demonstrating competitive readiness, which is simply done in a race during a selected period of time and declaring one’s intention to compete.

Athletics Canada’s representative did not reply to an email inquiry about the declaration policy, however, the policy appears to have been brought in sometime during the mid-1990s towards year 2000, so is a legacy of the previous administration that was in place for 16 years.

It is assumed that the declaration policy was created to give Athletics Canada time to know who is interested in competing, so that passports and travel plans can be ready in time as well as the hassle of announcing names then finding out the athlete is not planning to compete. In short, this allows organisation to happen well in advance – no last-minute scrambling.

Interestingly the deadline for declaration for the world championships is July 5, 2015, where the competition is August 22 to the 30th. The qualification deadline is also July 5th, again the final day of competition at the Canadian national championships.

For the Toronto Pan Am Games, the final declaration date is May 1. The final qualification date is June 14, six weeks hence, while the competition takes place from July 18 to the 26th.

For the Pan Ams, there are no standards to achieve except to be one of the top two athletes in one’s particular event during the qualification period.

But what if an athlete has not come anywhere near the benchmark required after the declaration deadline passed, but before the qualification window closed?

In the case of Benson, to beat all of her Canadian competition or all but one, she would have to guess that she would need to run around the world championships standard of 2:01.00, as that is about how fast the top two athletes ended up running this spring. Finally, it would be handy to knock off a World’s qualification at the same time.

On May 30th, 29 days after the declaration deadline passed, Benson ran a jaw-dropping improvement to 2:01.58 to lead the nation for 2015. Eight days later she ran 2:01.48 and was second to North Vancouver’s Jessica Smith in that race – still in the hunt, right? Two nights later she ran 2:01.02 to leapfrog Smith and again was fastest in the country, only this time Eganville, Ontario’s Melissa Bishop and her virtually tied and both were credited with the time of 2:01.02, but the win went to Benson. The wolves were circling and Benson needed to make sure she was going to make it; meanwhile, unbeknownst to her the deadline for declaration had passed over a month before – she instead was eye-ing the qualification date of June 14th.

Why was Athletics Canada not hassling Benson and her coach to declare late? Could policy not be re—visited?

One athlete who wished to remain anonymous demonstrated the application process, showing that it takes all of about five minutes to click through. But at the end of the day, one would ask if sending the fastest possible team is the priority for Athletics Canada. It is. They even say so in the qualification criteria:

“In July of 2015, Toronto will play host to the Pan American Games. These Games will play an
important role in preparing our top athletes for the IAAF World Championships in Beijing later in the
summer. It will also allow Athletics Canada (AC) to send a larger team to gain valuable experience in a
major Games environment. As hosts, AC is committed to represent Canada in all events. For that
reason, the criteria identified in this document are designed to select as large a team as possible while
still maintaining a high performance focus.” 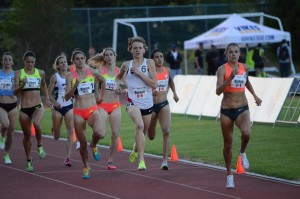 Benson plans to go to the world championships. If Smith doesn’t finish top-three at nationals and under 2:01.00, she doesn’t go to worlds, but takes part in the “preparation meet” – Pan Ams – and then Benson – who according to the overview statement – will miss the valuable preparation meet in Toronto, that seems backwards.

Bishop and Smith are no slouches, they are both 2012 London Olympians and are the third and fourth Canadians all-time to breach the two-minute benchmark for the event. The now retired Diane Cummins and Charmaine Crooks were the first two. Cummins owns the national record at 1:58.32.

If Benson did not bother to race on that fateful May 30th date, she may not have run another 800m this season, as she also competes in the 1500m distance.

It was only her second race of the year, a small meet with a couple of other 1500m runners who were trying to get fast too; racing “under-distance” – Commonwealth Games bronze medallist Kate van Buskirk of Toronto was there as was London Olympian Hilary Stellingwerff, who lives in Victoria, the former dealing with an injury, the latter coming back from pregnancy. Also in the race was University of Victoria’s Rachel Francois who was threatening to get faster. She ran a season’s best that night, but Benson won, easily.

Benson’s fourth and final meet during that two week period was in Portland, which was taking place on that final qualification date that she had been eyeing since May 30th. Also in the race was Smith and Bishop who, being London Olympians, could easily take the first and second fastest times nationally and snatch away the Pan Ams opportunity from Benson.

Benson won that race too; again she smashed her personal best by becoming the fifth Canadian all-time to run under the two-minute barrier, by finishing in 1:59.94. As exciting as May 30th was, June 14th brought tears.

She is the fastest in the country at this time and she is not going to the Toronto Pan Am Games, but, depending on if she finishes top-three at the Canadian track and field championships in Edmonton, she should be going to the world championships. So not all is lost, but the question here is, does the declaration policy and its deadline date allow Canada to field the fastest possible team?

In hockey – Canada’s game – should a player in any of the top junior leagues such as Junior-A, Major Junior or College have a breakout from one season to the next, to become the best in the country, we know that Hockey Canada would be seeking that athlete out – not to mention the NHL scouts and competitive team scouts, reporters, sponsors and agents. None of them would wait for the athlete to declare weather he wants to play in the World Junior Championships or be drafted into the NHL or in the case of a Junior-A player offered a scholarship to an NCAA school. The athlete’s phone would be ringing off the hook. Hockey Canada, the NHL and College recruiters want to ice the best possible team.

“Many issues in this sport become clear if the interests of the athletes are the first concern for everyone.”

Canada’s all-time fastest 800m runner agreed, “I think it’s extremely disappointing that an athlete can be left off a team simply for not showing (in writing) an interest in wanting to participate. Athletes dream about representing their country and only a select few have the luxury of picking and choosing which teams they want to be on. Everyone else wants to go to Toronto for the Pan American Games. I still do and I am retired!”

One of Canada’s best all-time 100m hurdler’s Angela Whyte said, “It’s unfortunate to leave talented and capable athletes off of a team due to what seems like a minor detail. However, it is best for athletes to be aware of deadlines so such an occurrence doesn’t disqualify them from selection. Better to declare and have no clue if you will qualify than be sorely disappointed. Perhaps this will open up the conversation to ensure that all athletes get clear communication about the importance of the deadlines, but also create a reasonable and fair remedy, so we can send our best to major events.”

“Many issues in this sport become clear if the interests of the athletes are the first concern for everyone,” added Doug Clement, former Coach of Charmaine Crooks and director of the Harry Jerome Track Classic.