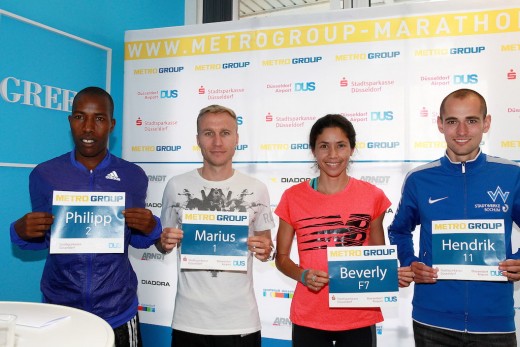 Patrick Sanga hopes to bounce back in style when he runs the METRO GROUP Marathon Duesseldorf on Sunday. The Kenyan missed out on the Hannover Marathon two weeks ago because of a visa problem and now intends to break the course record at another German race instead. This mark stands at 2:07:48. While defending champion Marius Ionescu goes for the Romanian record of 2:12:30 women’s favourite Beverly Ramos of Puerto Rico targets her own national best of 2:41:56. Germany’s Hendrik Peiffer hopes to snatch a ticket for Rio at the last moment, running his marathon debut on Sunday. He will need to run faster than 2:13:57. Adding a relay event organisers of the METRO GROUP Marathon Duesseldorf have registered around 16,000 runners for their event. „I expect to see a very interesting race and just hope that the weather will be fine,“ said Race Director Jan Winschermann.

„Yes, yes, yes,“ answered Philipp Sanga when asked if he will go for the course record, which was established by Ethiopia’s Dereje Debele three years ago with 2:07:48. The Kenyan got some extra motivation simply by the fact that he is finally able to run a spring marathon. „Two weeks ago I had already travelled from my training base in Kaptagat to Nairobi, aiming to go for Hannover. However at the check in they found out that there was a wrong date on my visa. The embassy made a mistake, so I was not able to fly in time for the race. I thought my spring season would be over. It is a problem if you have trained for a long time and then you can not race. However I was relieved when I heard that I could go to Duesseldorf.“

With a personal best of 2:06:07 Sanga is the fastest runner on the start list by some distance. While this dates back to 2011 he was third in Vienna with 2:08:58 two years ago. „Last year I suffered of a back problem, but now I am fine,“ said the 32 year-old Kenyan who intends to run the first half in 64:00 minutes. Fellow Kenyans Cosmas Kigen, who has a personal best of 2:09:43, Mathew Bowen (2:10:57) and debutant Jackson Rutto will probably run with Sanga in the first group.

Marius Ionesco is the defending champion. He won the METRO GROUP Marathon Duesseldorf with a personal best of 2:13:19 a year ago. With that performance he already secured Olympic qualification early. „It is the first time for me to go into such a race as the defending champion and with bib number one,“ said 31 year-old Ionescu. „I know it will be so much harder this time to win, however I will do my best. It is my aim to run a personal best and hopefully I can break the national record.“ It was back in 1978 in Prague when Catalin Andreica ran 2:12:30 – Ionescu was not even born then.

„This will be an adventure for me. But I am looking forward to my marathon debut and I am confident,“ said Hendrik Pfeiffer. The 23 year-old German has to run faster than Julian Flügel to snatch a place on the German Olympic team at the last moment. The German qualifying period ends at the end of April. Flügel ran 2:13:57 in Berlin last autumn and currently is number three on the German marathon team. So Pfeiffer will have to run faster than that on Sunday.

The most likely time goal to be achieved in Duesseldorf is that of Beverly Ramos. The 28 year-old former steeple chaser and long distance track runner, who has a PB of 9:39.33 in the 3,000 m steeple, turned to the marathon last year. Running her debut on the difficult course of the New York Marathon she clocked a national record of 2:41:56. „It was tough in New York. But here in Duesseldorf I want to be much faster on a flat course. My goal is to run a time of around 2:33,“ said Beverly Ramos, who is already qualified for the Olympic marathon with her time from New York. In March she was back in New York, running 72:09 in the half marathon. This suggests that she is well on course for her time goal. Hungary’s Zsofia Erdelyi, who has a personal best of 2:36:56, could be her main rival. Former Ethiopian Ferahiwat Gamachu hopes to improve to sub 2:38 to secure a spot in the Belgium Olympic team. She has a PB of 2:40:40.