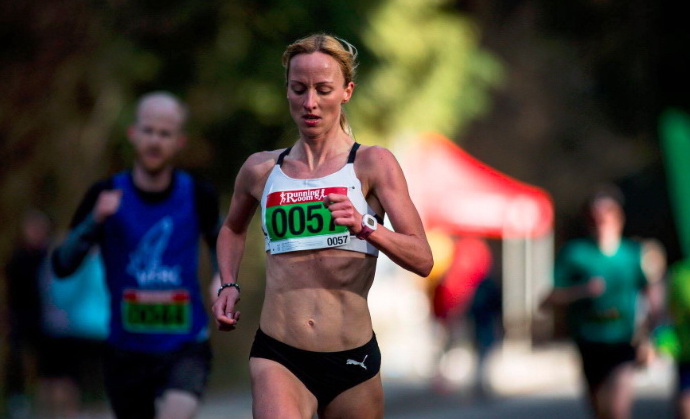 The St Patrick’s Day 5K that takes place in Vancouver’s Stanley Park lived up to its hype as Canada’s most competitive 5K race, despite the late withdrawal of several top entrants. Transplanted Scot, Sarah Inglis, broke the Canadian all-comers record that was set by Natasha Wodak at last year’s race. Saturday, Inglis ran a stunning 15:29, with Wodak just three seconds under the old mark having to settle for second as she finished in 15:36. Wodak’s consolation was an F3539 Canadian record, and the BC Championship title.

“I went for the mile with ‘Tash and Shalaya, then just kept going! I am surprised by the result,” said Inglis.

Event record prize money was also paid out on the men’s side, as John Gay clocked 14:06, the fastest 5K ever seen in BC, also earning him the BC Championship. Justin Kent out-leaned Kieran Lumb for third, both finishing in 14:13, just a second outside the old record set by Luc Bruchet last year.

“I’m really excited to come away with the soil record. After running 14:19 here last year, it was certainly in the back of my mind to go for the course record, but I knew things would have to line up,” said Gay. “Fortunately for me, Justin Kent was also looking to get after it and set a very quick tempo from the gun. I owe a lot of my time to him for keeping it honest and I think it was a great confidence booster for both of us as we go into the mixed relay in Denmark. Glad I get to race with him and not against him there!”

Run in perfect conditions, the downhill first 400m, plus bonuses on offer to the leaders through the first mile, ensured a fast pace from the outset. Justin Kent won the mile bonus in 4:20. He crossed the mile timing mat marginally ahead of Gay and then there was a 40m gap back to Lumb, who was leading the chase pack in third.

Buzzing to set a new @AthleticsCanada 5km Road All-Comers record today at the @stpatricks5k of 15:29! Thanks to the race organizers for a fun event…now for a celebratory 🍺 @LangleyMustangs 📷 @3oh6 pic.twitter.com/6BnPAOch0m

The women’s mile was even closer, taking a photo to separate American Shalaya Kipp from Inglis, in 4:44, with Wodak a second behind. Kipp faded from that point on, but still held on to third at the finish.

The BC High School Cross Country champions acquitted themselves extremely well against such illustrious competition. Josh Woolgar placed 25th in 15:34. And Kendra Lewis placed 11th in 17:23.