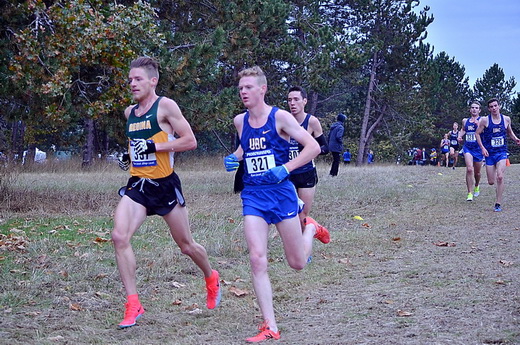 The University of Victoria Vikes hosted the Vikes Cross Country Invitational for the first time in 20 years at Beacon Hill Park on Saturday. The meet was run as a practice event in advance of the U Sport National Championships that will take place here on November 12.

“Yes, it is a practice run, to get a good look at the course in competition before nationals,” said Vikes Coach Brent Fougner before the meet, “It is a great course and the city has been good about getting down there and mowing the route.”

The Vikes men finished third in a meet that included the Universities of Regina, British Columbia, Trinity Western University, and Thomspon Rivers University as well as a few non-attached runners.

“I love the route,” said Adam Strueby of Regina. “It’s fast, but it rolls, so you don’t get caught in a rhythm. I look forward to racing here for nationals.” Strueby finished second in 31:18 to John Gay of UBC, in a hard-fought battle. Gay finished in the time of 31:10:11.

UBC competes in the NAIA as opposed to the U Sport league, which every other team that was in attendance does. NAIA require men to run just 8K, while U Sport competes over 10K. The women compete in 6K and 8K respectively.

“It was a good little meet and it gave us a chance to run locally, without having to go down to the States. We don’t run against these athletes except for at club provincials and club nationals, so it was good to get one in against them,” said UBC Head Coach Laurier Primeau.

Gay didn’t have to run the extra 2K loop but did. He took the lead going into the fourth lap, which fooled spectators, thinking he was going to finish early. Asked if he pulled that off as a tactic he said, “no, but that is a good idea. I felt strong and just went for it a bit early.”

Hooten was bed-ridden all week, so his fourth-place performance was a pleasant surprise. Meanwhile Declan White of TWU was running a strong tempo effort and not racing.

Caleb De Caleb de Jong of TWU finished third in the time of 31:29.

“The standing would be different if Declan was racing,” added Primeau.

“It’s a great course, too bad we don’t get to race here for our NAIA championships,’ Gay added.

The Thunderbirds will be competing in Vancouver, Washington for the  NAIAs and in Iowa for their regionals.

“The team’s strength is its depth so in that sense if they run together they support each other,” said Vikes head coach Brent Fougner about the majority of the Vikes finishing together. “They pace themselves. If you’re running with the top group then, yes, you are racing against everybody but if you’re not up there then it’s running a smart, well-paced race and you’re going to place much better in the long run.”

Vike Jonny Toombs was the top runner finishing sixth in 31:54.80. From there it was a near-pack finish as Derrick Evans was ninth in 32:12.63 and Joshua Kozelj, Brandon Vail and Matthew Noseworthy were 14th, 16th and 17th, respectively. Vikes Thomas Oxland and Alex Nemethy were 19th and 20th, receptively.

Today marked the first time the Vikes have hosted a cross-country race in Victoria since 1997 and although it had been 10 years since a university race has been held at Beacon Hill Park there was no shortage of supporters and alumni flocking to the familiar racing scene to help out or cheer on the Vikes.

Up next the Vikes will prepare for the BC University Championships on Oct. 30 in Abbotsford, B.C., while they will be aiming to peak for the U SPORTS Championship on Nov. 12 at Beacon Hill Park in Victoria.

The women’s race was won by Lindsay Carson of Burnaby. She led the entire race, but in the end it came down to a finish-line sprint, where she pulled ahead with just metres to go.

“Coming from up north (Whitehorse), I didn’t get in the quality running, and I know these girls have some some speed and a kick, so I knew I had to run a strong race,” shared Carson.

Carson is more familiar with the 8K distance, while this was the first time the varsity athletes have race cross-country that far. The 8K is a move up from 6K. Many of the UBC team members finished after three, two-kilometre laps.

She will be competing in the BC club cross-country championships as well as the national club championships this fall in Kingston, Ontario.

“Those are my primary goals this fall, is to runs BC’s in Abbotsford and then nationals in Kingston.”

“It was interesting when the girls learned that they had to run 8K– their reaction to it but they have really, really responded well to the training and the increase in volume,” added Fougner. “Today they did great. You would never think they had just run their first 8km and it was awesome.”

Vikes returnee and known Canadian triathlete Alison Hooper was the top UVic athlete finishing third amongst the university competitors in a time of 29:04.69. Spartans runner Regan Yee finished first in 28:31.68 to give Trinity Western first in the team standings for 8km. Former Guelph cross country star Lindsay Carson was in fine form on the day representing Langley Mustangs and winning the overall women’s race in a time of 28:27.42.

“It’s great to have Alison back on the team,” said Fougner about the return of the Canadian triathlete and now Masters student to the Vikes. “Alison is going to be a great team leader and I think we are going to see a few of the other girls on the team a little closer to her in a month.”

The Vikes also had a strong performance from Emma Edmonds who finished sixth in 29:53.17, while Chloe Hegland was ninth (30:26.18). Vikes Andie Wood, Chloe Hewitt, Laurel Booker and Emma Bibault finished as a pack to sweep 11-14th place, respectively.

Up next the Vikes will prepare for the BC University Championships on Oct. 30 in Abbotsford, B.C., while they will be aiming to peak for the U SPORTS Championship on Nov. 12 at Beacon Hill Park in Victoria.