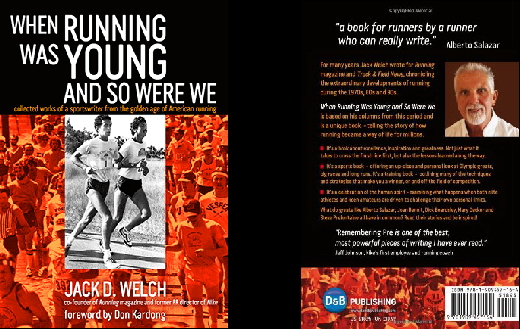 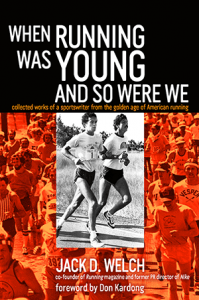 Jack D. Welch is a running journalist who has chronicled the life of the running elite, as an insider. He created Running Magazine, wrote for Track and Field News and owned a running shoe store. He was a competitive runner and a talented writer, who befriended the top athletes of the time; therefore he possesses a very unique perspective on the game, especially of the golden era of American distance running that took place during the 1970s.

From that rustic dorm that author John L. Parker described in running culture’s favourite novel “Once a Runner” as ‘one of those ancient resonant wooden buildings that seemed to hold the oils and essences of those that live there,’ so did Welch, figuratively speaking. When reading Welch’s book, ‘When Running Was Young and So Were We’, it seems that much like when Quenton Cassidy emerged from Doobey Hall, ‘with a grunt, and he was off’ to start his morning run, so did Welch; for the daily toil. They were both embedded deep in the culture of competitive running, Cassidy as a mostly-fictional character training to be a world-class middle-distance runner, Welch as a very real running journalist, capturing the sport at its very substance.

The pages are filled with interviews with the top athletes that competed during the 1970s, 80s and 90s. Former world record holder over three distances, Norway’s Ingrid Kristiansen shares a quirk she might not tell a general sports journalist of why she wears gloves during warm marathons: to cool the hands and to wipe sweat off of her forehead.

You may not know who Greg Shank is, but Welch interviewed him twice. Shank is Chris Fox’s coach. You may wonder who Chris Fox is. When you find out, you will have read 11 pages of Welch painting a mental picture in his own words describing who Fox is. Welch asks you the reader, repeatedly, to ‘imagine you are Chris Fox’. He often writes colloquially and in the patois of those embedded in running culture, providing gems that only serious runners will appreciate, like when training gets intense, ‘it’s just balls out after that,’ and in reference to a last chance opportunity to qualify for the Olympics, ‘imagine you are Chris Fox, you are going to shoot out the moon.’

Welch provides race reports from the first person perspective; he is the runner, literally and literarily. Not quite fast enough to be considered super-elite, he is fast enough to mingle with the best as a respected, embedded-like journalist of running. He covers the 1980 New York City Marathon, the first sentence to open the chapter he writes, ’14,012 starters/12,620 finishers’.  A little unorthodox; however, he again brings you into the image of the scene as he describes Alberto Salazar’s rookie win and legendary finish, where Salazar ended up packed in ice and having his last rights read to him.

Welch covers the first women’s US Olympic marathon trials from 1984. He creatively sets the scene and the people from the third-person perspective, ‘there was the grey of the overcast skies and the hair of 54-year-old Sister Marion Irvine. There was the evergreen of a Douglas Fir and the 16-year-old Cathy Schiro. There was the gold of the scotch broom and the dreams of the top three runners. There was the control and confidence of Julie Brown. There were the hopes of 238 starters. There was no tomorrow…’

Welch wrote about Nike’s Phil “Buck” Knight; a short bio, if you will. He then interviewed him; both articles were written in 1995. Welch describes how Stanford’s School of Business Professor Frank Shallenberger gave Knight an A-grade on a term paper that was written on the subject of starting a small business. The idea was to design shoes in America, produce them in Asia at a low cost and import them into the States. Welch refers to Knight as “Buck” often and portrays him as a highly competitive person. He ends the bio with: ‘Phil Knight never stops competing…’ and ‘…at Nike, there is no passing the Buck.’

The book ends with a story on Pre and asks the question, what if Pre lived? Welch takes the reader to the car accident on that fateful night, when Pre had at least one too many beers. In this version, Pre is saved from death by a couple of strong buddies and Phil Knight, while trapped under his flipped MG; an entertaining and fantastical story to be sure. Welch then gathers third party reference-like stories about Pre by the University of Oregon coach, Bill Dellinger as well as Mary Decker-Slaney, Todd Williams and Bob Kennedy, who writes, ‘There’s been a lack of will among U.S. athletes to put everything on the line…athletes satisfied with competing against other Americans….then get destroyed at a major championship. Steve Prefontaine would’ve never settled for any of that. Never.’

Former Olympian, journalist and director of the Lilac Bloomsday Run in Spokane, Don Kardong wrote in the Forward of Welch’s book: ‘there was a movement unprecedented in the history of the world and Jack Welch was sitting and running right in the middle of the maelstrom, pen in hand, pen figuratively speaking’.‘ To the run-initiated of course Kardong was referring to the big, 1970s running boom that coincided with the golden era of American running. Welch captures that moment and continues well into the 1990s with the colloquial charm, wit and insider knowledge that has yet to be delivered with as much creative flare elsewhere; When Running Was Young and So Were We, is a must read for runners of all abilities, especially for the fan and for the elite.