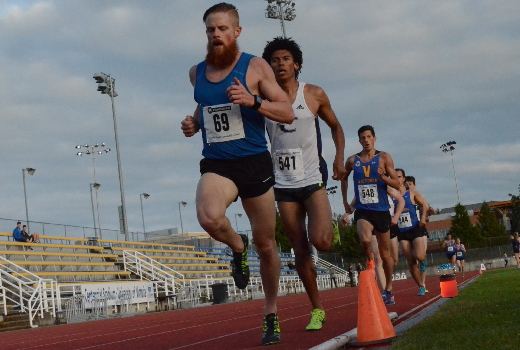 Geoff Harris, 26, of Halifax, Nova Scotia is one of Canada’s top middle-distance runners. He specialises in the 800m event. Harris has represented Canada internationally, as he has competed in the 11th IAAF World Junior Championships that took place in Beijing, China in 2006. More recently, he competed in the 2012 London Olympic Games finishing seventh in the semi-final and 17th overall – exceeding his pre-race ranking by 20 positions. He is the 2012 and 2013 Canadian 800m champion. His personal best is 1:45.97.

Harris attended Dalhousie University in his hometown and is a member of Halifast Athletics. Currently he is residing in Victoria, BC.

Christopher Kelsall: How did winter training go for you?

Geoff Harris: It had its ups and downs, I spent a month in Halifax where I trained almost exclusively indoors due to four separate blizzards. A 200m track and a treadmill for a month, luckily we have a sick sports centre and I got to hang out there every day.

CK: Did you have a chance to spend time in Phoenix training?

GH: No Phoenix this year. I stuck it out in Victoria for the majority of the winter other than my trip to Halifax. Victoria really hasn’t been so bad! Much better than last year at least. Halifax was a nightmare as previously stated and I got to Flagstaff in March where we had great weather other than one blizzard that lasted four hours. Post-blizzard run tried my first Kombucha beer. It was the most interesting beer I have ever tried.

CK: Why was Kombucha the most interesting beer that you have ever tried?

GH: The Kombucha beer, like any Kombucha drink, has “the snot” in it, this one also had 6.5% alcohol… there really is no appropriate way to describe this. I think it’s something we should avoid discussing but anyone who’s had Kombucha knows “the snot” and that’s good enough.

CK: The “snot”, eh. How long did your long runs get to on the treadmill or track? I can’t imagine the monotony.

GH: The Atlantic Centre being as accommodating as they are allowed me to set up my laptop to the big speaker and put it in front of the treadmill, allowing me to get fully caught up on all the shows worth watching and some that really aren’t worth anything at all.

CK: So how long did your runs get to on the track and treadmill?

GH: My longest effort on a treadmill was 10 miles (16 kilometres), and my longest total inside of a day was 14 miles (23 kilometres). Ten miles non-stop was nothing short of a miracle considering the size of my bladder.

CK: And which shows are you referring to?

GH: Only the best, those being Suits and House of Cards. Kevin Spacey is the bee’s knees in House of Cards. Season 2 episode 1 will leave you stunned and feeling rather upset. I watched that episode in the creepy unfurnished apartment the Centre let me use and tried the newest in the “Keith’s Hop Series” nonsense… it wasn’t hoppy… If you’re gonna put the word “Hoppy” in the name of a beer, the taste should resemble something hoppy. It didn’t, it made me sad. Between that, my creepy apartment and that episode of House of Cards… I had a strange night.

CK: I bet. Isn’t House of Cards the first series that was produced and streamed by a streaming service, Netflix? They were nominated for nine Emmy awards the first year!

GH: Yes Netflix did produce it and it came out a well-polished item. Kevin Spacey has always been sort of mystical to me. The Usual Suspects was what got me.

CK: So back to the lack of hop in your beer. For local hoppy beers have you tried Total Eclipse of the Hop? It’s made by Howe Sound Brewery. They come in one-litre bottles with a hinged cap for re-sealing in the goodness.

GH: I have tried it. I haven’t needed to re-seal it. It’s an extraordinary beer. It’s also 8% and I think 92 IBU’s so it comes with a punch. I have only ever had one at a time. It’s like when you get a nice bottle of wine, you wanna drink it first cause once the second bottle is opened the taste becomes much less important. Total Eclipse of the Hop is a great way to start if one is inclined to have a couple beers. Plus it takes about two more other beers to get the bitterness out of your palate.

CK: Regarding the creepy apartment, what made it creepy?

GH: Clayton Park made that apartment creepy, and anyone who is not from Halifax won’t understand that. It’s not the nicest area in Halifax.

CK: Ok. Now you had mentioned a Keith’s not being hoppy earlier. So what did it end up tasting like?

GH: Well it still had its “Keith’s” flavour… This is the best way I can describe it. In the same way that a McDonald’s burger doesn’t taste like beef, the Keith’s hoppy series doesn’t taste hoppy. But sometimes a Big Mac is really delicious (probably after about 12 Keiths, but in that circumstance you’re way better off getting a donair. (It’s an East Coast thing). You have never ever heard someone utter “That’s a nice juicy patty” when they are forcing a Big Mac down their throat. That’s because every McDonald’s burger has that generic McDonald’s burger taste. That’s what these “micro-brew” flavours that the bigger companies put out taste like: generic McDonald’s. (I am definitely limiting my chance of picking beer sponsors).

CK: Well “big” beer sponsors and “Big Mac” makers. There probably is a Picky Bars or an Oiselle of beer out there looking for an advocate like yourself.

GH: I think there are a lot of companies like that out there not to mention those two companies specifically!!! Lauren Fleshman, if you read this I want you to sponsor me… also you are beautiful.

CK: Did you have a chance to watch the IAAF World Indoors, like Nicole Sifuentes’ bronze as well as some of the drama to do with Nike and Gabe Grunewald?

GH: I watched Worlds and Nicole’s performance was great to see! I am so happy for her! I try to avoid all drama, so I heard lots about it but think that it’s all a little unnecessary. I think it was built up a lot more than it needed to be.

CK: Could have been settled over a hoppy beer, yes?

GH: Like all things I believe it could have been.

CK: For the summer are you moving to Heffeweisen’s from stouts and ales; seasonal fare?

GH: My goal is to move toward sobriety as is commonly the practice for athletes, what my time in the fall has in store will be a different story… I’d like to to complete my first beer mile (a record will fall) and hit a century club.

CK: There is controversy right now over the first sub-5:00 beer mile. It appears that perhaps it stands at 5:09 officially, done by Victoria’s Jim Finlayson. Where are you planning to race this fated beer mile world record?

GH: I am gonna run a beer mile at some unknown point and when it happens I promise that it will be epic one way or another. I believe my East Coast pedigree and half-mile running ability partnered with my taste for fine fermented and carbonated beverages makes me a potential stud in the world of Beer Mileing, all that being said I have some training and experimenting to do before any attempt will be put forth.

CK: Besides beer, what does your spring and summer racing season hold for you?

GH:… two laps in a series of yet-to-be-determined cities. We are taking things one race at a time this year. I wanna defend my national title and get into some PB-potential races!