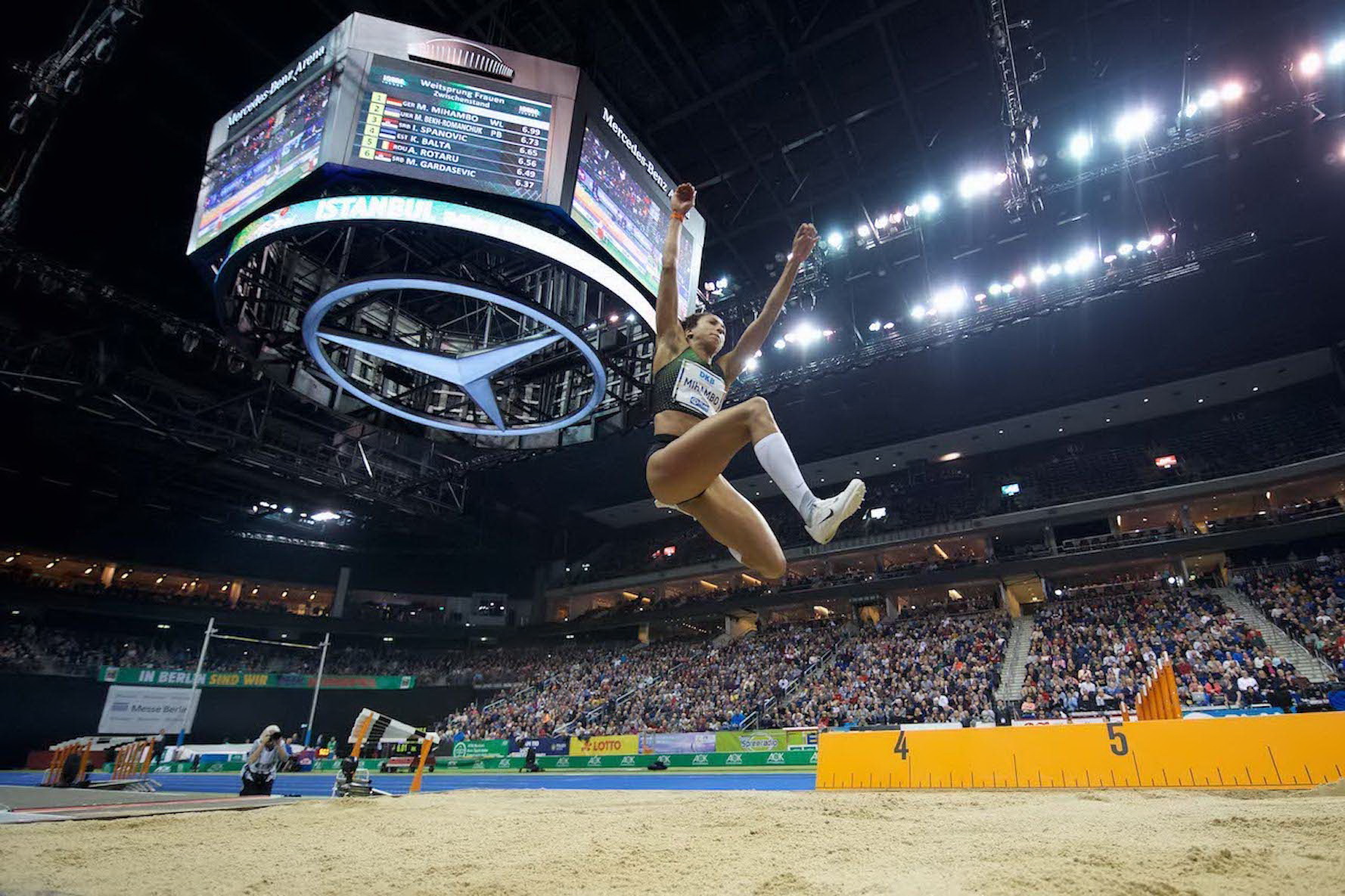 World-leading marks by Germans Malaika Mihambo, who took the long jump with a meet record of 6.99m, and Pamela Dutkiewicz, who won the 60m hurdles in 7.89 led the way. A world-lead came in the Pole Vault, where Sam Kendricks of the US cleared 5.86m. In a very close 60m final Britain’s Reece Prescod edged out Arthur Cissé of the Ivory Coast with a winning time of 6.53, which is a European lead.

The men’s versus women’s discus event ended with the women defying the odds. Nadine Müller led her team to a 27:24 points victory. The German produced the best throw of the competition when she achieved 63.89m. This is a meeting record and an unofficial world indoor best. No official world records are listed in indoor discus throwing. “Fantastic performances, fantastic atmosphere and the discus challenge went extremely well. We are all truly happy,“ said Meet Director Martin Seeber.

Reece Prescod won both his races this evening but made it as close as it could get. First, he just edged out Italy’s Filippo Tortu in the heat with both athletes timed at 6.63. Then the sprinter from Great Britain came from behind again in the final. It was Arthur Cissé who had moved clear mid-race. But Prescod made up the deficit and caught him on the line. Both men were given the same time of 6.53, which is the second fastest in the world this season.

“This is not a bad time for me. I was quite happy with my start, which is usually my bottleneck. This is my first ISTAF INDOOR and I have to say it is amazing. The atmosphere is incredible. I will definitely be back,“ said Prescod. Another upcoming European sprinter, Filippo Tortu, took third in 6.59. “This was a great race for me. But I will finish my indoor season now since I want to fully concentrate on the 100m in the summer season,“ said the Italian.

European 110 m Hurdles Champion Pascal Martinot-Lagarde claimed a second victory in Berlin after his gold medal performance last summer. In a close contest with Germany’s Gregor Traber the Frenchman won with 7.62. Traber followed with 7.65 while Hungary’s Balazs Baji was third in 7.76. “The end of my race was pretty good, but the start was bad,“ said Pascal Martinot-Lagarde, who plans a full indoor season: “I want to run the European Championships.“

When the bar was raised to 5.76m four Pole Vaulters were still in contention in an event, which has produced very good results time and again at the ISTAF INDOOR. World champion Sam Kendricks was up against the three Poles Piotr Lisek, Robert Sobera and Pawel Wojciechowski. Kendricks and last year’s winner Lisek both cleared this height at their first attempt while Wojciechowski needed three jumps to do it. For Sobera this was too high and he had to settle for fourth place with 5.66m. Kendricks then won the competition as he was the only one to jump 5.86m. He did this with his second attempt and took away the world lead from Lisek, who had won in Cottbus two days earlier with 5.85 m and this time was second. Going for a personal indoor best of 6.01 m afterward Kendricks had promising attempts. “My best attempt was the first one, when I still had a lot of energy,“ said Kendricks.

Britain’s Kristal Awuah showed a fine performance in the 60 m: With a time of 7.19 she improved her personal best of 7.30 by a big margin. She was well ahead of Klara Seidlova of the Czech Republic and Berlin’s crowd favourite Gina Lückenkemper, who clocked 7.27 and 7.30 respectively. “I am happy and excited that I won tonight. Now I will go for the British Championships with the aim of qualifying for the Europeans,“ said Kristal Awuah.

In a close 60m hurdles final Pamela Dutkiewicz just held on to a 7.89 victory. She was in the lead early, but had to fight hard to keep ahead of fellow-German Cindy Roleder, who was closing in and finished second with 7.91. European 100 m hurdles champion Elvira Herman of Belarus took third in 7.97. “I was very nervous before my heat and told myself: think less and just race. I knew the final would be fast because of my fast opponents,“ said Pamela Dutkiewicz after her world-leading performance.

European long jump champion Malaika Mihambo produced an outstanding performance. After stepping over at her first two attempts she sailed to 6.94m in round three, taking the lead from Ivana Spanovic. Mihambo then went on to 6.99 m in round four, breaking the meeting record by fellow-German Alexandra Wester by four centimeters. She stepped over in round five, but came back with another great leap of 6.98 m. “Today was a really good competition. I hope I can further improve this winter and finally jump seven metres,“ said 24-year-old Mihambo, who tied her outdoor best in Berlin.

Spanovic, the reigning World Indoor Champion from Serbia, who competed for the first time since an injury during the European Championships last August, finished third with 6.65. Ukraine’s Maryna Bekh-Romanchuk was second with 6.73m.

There was some scepticism when the organisers announced that they would stage a men versus women competition. However, this format became an instant success in Berlin on Friday night. Few had expected that the women could upset the men, but that was exactly what happened. There were four direct competitions in each round and a total of four rounds. When the men won the opening two duels it looked like the expected scenario. But then the women hit back and when Germany’s Nadine Müller beat Olympic Champion Christoph Harting it suddenly became a fascinating contest. It was evenly balanced right to the end with the score even before the final round (18:18). It could easily have ended in a draw, however, Nadine Müller had produced a meeting record of 63.89 m which secured an extra three points. That was the difference in the end with a final score of 27:24. While Müller was the outstanding thrower in Berlin Austria’s Lukas Weißhaidinger produced the best throw of the men’s team with 63.06 m. “A competition against the men, that was a superb idea. It was exciting for us and for the spectators as well,“ said Nadine Müller.