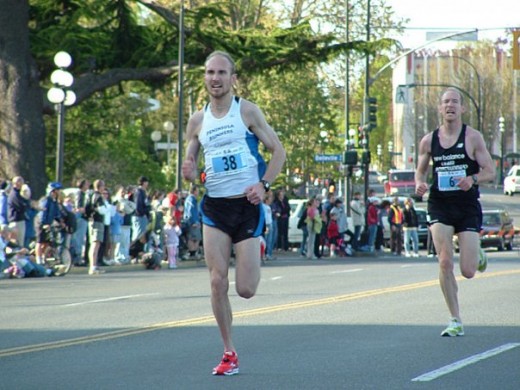 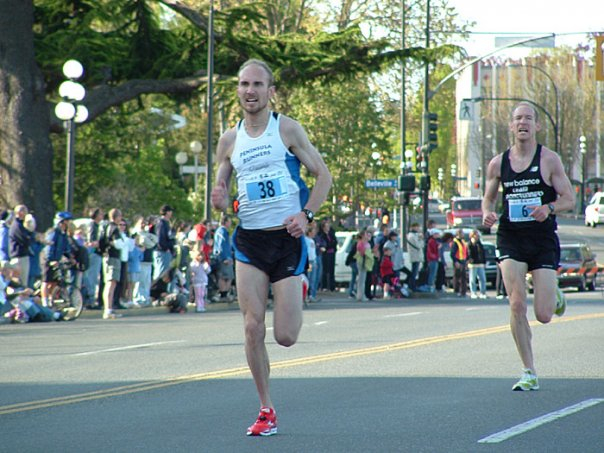 Eric Kiauka races the Esquimalt 8k in (Esquimalt) Victoria, BC, just another local road race where a few hundred runners, joggers and walkers join in on the somewhat hilly, summer offering. He comfortably sits in with the small, lead pack made up of David Jackson and Steve Osaduik, two guys capable on any given Sunday of completely disheartening their comrades-in-sweat. When Eric rounds the final corner with them, he drops a little high octane petro into the thrusters and extricates himself neatly into the chute, no longer the comrade-in-the-pack, he becomes the formidable foe with the killing kick.

Kiauka grew up in a soccer family, in one of Canada’s two soccer hubs of West Vancouver, the other soccer hub being Victoria, where he now resides. This amongst other sports and some early running is where he developed his big aerobic engine. Now of course he uses that lifetime base, to propel his fine-tuned self for potential international competition, as in Beijing!

I caught Eric between games of Risk, golf and packing plans for his next race south of the 49th parallel. Here follows a little dialogue about his life as an emerging international athlete.

CK: Eric, apparently your favourite meet is the Victoria International Track Classic and you also enjoy racing at Stanford. Now that you have won the Times Colonist 10k (last week), do you wish to change your answer?

EK: Ha ha! Maybe if it was under 10k! It’s a great course, but I gotta say I’m probably never going to have a favorite race at that distance! Maybe with a few more good experiences you’ll have to re-ask me that question then.

CK: At a recent 3000m indoor race in Seattle, you got nipped at the line. You ran a good time though. Was that a bittersweet finish, or did the placing even matter to you?

EK: Are you sure I lost? I’ll have to go back and check the footage! Ha ha. Yes I was a little bitter about that. It was a great race and to lose it right at the line, it’s a little frustrating, but I was more concerned about running a big PB. If I was really going for the win, I wouldn’t have led the last 1.5km.

CK: You are now at least as fast as Dave Milne (sponsor Peninsula Runners and one-time steeple chase fast-guy) and faster than him in his current state of course. Apparently he gets in a fair amount of golf; to add to the humility, can you now beat him at golf too?

EK: My best day was when I caught fire and Milne kept pressing me. I think I won like 20 dinners out of him! Most the time he uses his newly acquired tonnage to bomb drives way past me and I don’t stand a chance.

CK: 60% of the strokes happen on the green, how is your short game compared to Mr. Tonnage?

EK: If I can get my putter going it’s not bad, but to be honest, it gets ugly out there! I just try to not lose too much money and have my partner carry me.

CK: What are your handicaps?

CK: Do you kick his butt at Risk too?

CK’s note: Eric stands up and pounds his chest like Tarzan’s chimp.

EK: I’M WHAT YOU WOULD CALL A RISK CHAMPION.

CK: Your coach is the legendary Ron Bowker. Perhaps not so coincidently your performances are consistently solid. What were you doing before Ron? I heard you were mostly self-coached.

EK: I was coached early on by the late Frank Reynolds and was training at the center here for a while. Since being coached by Ron, my results have really improved. We’re always on the same page and he’s really believed in me and I think that has made a huge impact on my confidence. I’ve also been supported by Jamie Grimes at Synergy Health Management and since seeing him I’ve been healthy and been able to train consistently.

CK: When you say ‘center’, do you mean Pacific Sport? What happened there? You were getting coaching from them, no?

EK: In 2004 I moved to Victoria and was coached by Wynn. I was injured when I got here, and I struggled with that for some time. It was a tough few years. Since I wasn’t really getting much support and it wasn’t a great fit, I coached myself for the 2005 cross season and that is when Ron and I hooked up. I’ve been with Ron now since 2006.

CK: How is Ron’s approach different from Frank’s?

EK: I think I see more similarity than anything. They both are great at reading how you’re feeling and instilling a lot of belief in you. I’d say the main difference with Ron is doing a lot of active rest in the intervals. I’m usually resting a set distance instead of time.

CK: How was training at altitude in Flagstaff with Osaduik, Coolsaet and all those excellent runners?

EK: It was an awesome experience. I haven’t trained like that before, where I had time to focus on only running and being surrounded by the best runners from around the world was incredible. I think if anyone has the opportunity to go up to altitude, they should. I feel a lot stronger since the camp.

EK: We talked about it last year and it just didn’t fit, but we wanted to do it this year. It was something that we thought would be beneficial and so far it’s paying off.

CK: You looked incredibly comfortable breaking the tape at the TC 10k finish, while the guys behind you looked like they really worked for it. Do you think if some of the other guys were in better fitness right now you could have gone well under 30?

EK: I felt very comfortable out there and the plan was to use this race as a ‘tempo’ style effort to help build my strength since it’s been a while that I’ve done anything over 20min. As the race progressed, no one really made an assertive effort to push the pace, which played more into my hands. I think if someone had gone earlier, we would have gone well under 30 for sure.

CK: So where are your next few meets at? Are you doing strictly 3000m and steeple from here on out until you qualify?

EK: No I think we will do this steeple and then try and focus on a few other distances. It will really depend on how Stanford goes. Right now the plan is to run a 1500 and maybe a 5km at the series out here, and maybe another steeple in Oregon, but we’re keeping all our options open. I may look to Europe as well, but it’s hard to say. I would really like to run a fast 1500 and 5000 to get my PB’s down.

CK: Who do you respect as a runner or try to emulate.

EK: Tough one. I’ve always tried to race like Geb since he always seemed to find 2nd until the last lap. I think I’m quite good tactically like that, and he was probably the most versatile runner ever. Other than that, I’ve never spent too much time worrying about that stuff. I just enjoyed watching those guys run (assuming Eric means, the very fastest in the world). I grew up in West Vancouver and actually went to high school with Milne. I ended up going to school at the University of Portland where I was coached by Rob Conners and we finished 7th in the NCAA for XC and I was 10th in the steeple in 2001.

EK: I played everything. We were a big soccer family and that was my real passion for a long time. It wasn’t until grade 12 that I gave that up. I played basketball, even badminton, but stayed clear of the contact sports like rugby and football.

CK: How old were you when you figured out running was where your talent lies?

EK: I was very young. I won almost every race I entered from grade 4-6 and that is when I joined Norwesters. Actually a funny story is my first race I ever ran for Norwesters was here in Victoria and I raced Osaduik over 1500m. I out kicked him by .10! I think I was lucky though because I focused on soccer through middle school and I didn’t get burned out from running and came back to it in grade 12 to really focus on getting a scholarship and making it a priority in my life.