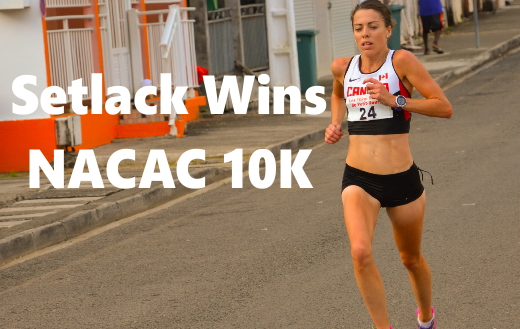 Emily Setlack (Tallen) of Cold Lake, Alberta won the 2016 NACAC 10K Championships in Guadalupe in hot conditions on a very hilly course. The second place finisher Tony Nero, was nearly two minutes back at 38:32. Third was Linda McDowall of St. Vincent and the Grenadines, who crossed the line in 39:00.

Setlack told Athletics Illustrated, “It’s always an honour and privilege to represent Canada.  I don’t have a lot of experience racing internationally, but I love how you meet other runners from around the world.   Language and culture is different but we have all worked hard and made sacrifices to make it to the start line and you share a unique bond and camaraderie through running.”

“I had lots of laughs with other runners trying to understand one another. I feel so fortunate to have had the opportunity to race in Guadeloupe. I’m not sure how I got so lucky!”

Asked to describe the race and warm temperatures Setlack said, “the second half of the race felt like something from a horror film, I was on my own, it was 35 degrees (felt like 40) and extremely hilly. I had to set small goals and break the race into small segments to get through it. It was the most challenging course I have ever raced on.  I also made a rookie mistake by starting out too fast, still learning and making mistakes at 36!”

Jean Marie Uwajeneza of Rwanda won the men’s race. Uwajeneza finished in the time of 32:31, while Cleveland Ford of Guyana finished second one-minute and two seconds back. The third place finisher was Joel Martinez of Puerto Rico in 33:36.

“As much as it hurt, I loved every minute of racing in Guadeloupe.  The coolest part of the race and my favourite memory was warming up along the course and passing so many cheery and happy people sitting outside of their homes who wished me luck. They were likely cheering during the race but I was in hurt locker and didn’t hear. I love races that bring the community together; it makes for a very unique and special race.”