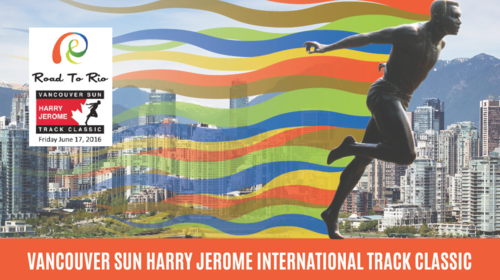 Team Eaton stops at the Jerome Classic on the Road to Rio. Brianne Theisen- Eaton of Humboldt, Saskatchewan who just won the heptathlon title in Gotzis, Austria will join her husband, Ashton Eaton of Medford, Oregon, here on Thursday, June 17 at Swangard Stadium as they prepare for the Olympic Games. This power couple of the multi-events, the decathlon and heptathlon, have done it all.  In March, they took double gold at the World Indoor Championships in Portland and last summer the gold and silver at the World Championships in Beijing.

Ashton, the world record holder, won the decathlon gold at the 2012 Olympics in London. Tackling 10 events in 2 days is considered the ultimate test of sport, sprinting, hurdling, jumping and throwing.  Brianne’s heptathlon is 7 events over 2 days and is equally challenging for any mortal. They are likely the only husband and wife who are serious contenders for the podium in Rio in any sport.  Could they repeat their double gold at the World Championships at the Olympics?  The 2 day multi –events are an amazing challenge, anything can happen.  The athlete faces the sequence of events, testing their ability to perform under pressure with extreme competition.