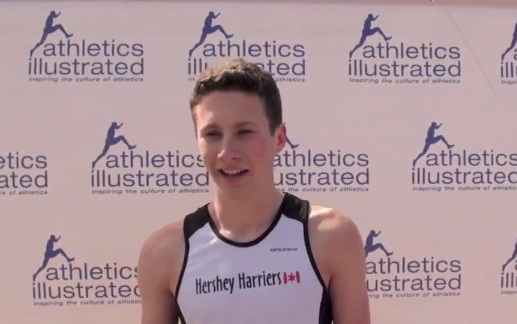 Vancouver’s Charlie Dannatt is finishing up his high school career at Handsworth Secondary School this spring and moving onto university for the fall of 2017. The 2017 provincial 1500m and 3,000m high school champion will be found spending his time in either the Faculty of Sciences or training with the Thunderbirds at the University of British Columbia, as he has chosen to stay home for his post-secondary education.

Originally from London, England, he moved to the west coast for Grade 5. Growing up playing various sports, especially soccer, he continues to cheer on Chelsea of the English Premier League as well as get in the occasional ski.

Dannatt’s high school career finished on a high note as he not only won the provincial championships in the 1500m and 3,000m distances, he crushed the 42-year-old provincial high school record in the 3K, which was 8:21.27. Dannatt won in the time of 8:15.93. The record was held by John Martens of Burnaby South from 1975. In that race, future teammate Tyler Dozzi of Victoria’s Oak Bay High School also ran faster than the old record, finishing second.

Christopher Kelsall: Of your audacious performance in breaking the 42-year-old BC High School record for the 3,000m distance, did you have a hint in training that you could do it? Or were you just being straight-up bold?

Charlie Dannatt: Going into the races, my coaches (Cindy O’Krane and Darcie Montgomery) could tell from training that I was fit enough for the weekend. The goal wasn’t really about time; it was about placing as high as possible. Yes, we knew that there was a possibility of taking the record but the main focus was to get across the line before anyone else.

CK: With both the possibility of taking the record and Tyler Dozzi running so well, were you surprised by the outcome and the way the race played out?

CD: The fact that Tyler and I knew each other so well meant that we knew each other’s strengths and weaknesses going into the race. As suspected, he went out hard in an attempt to try and drop me early, which allowed us to attempt the record. It wasn’t the fact that we broke the record that made it surprising but that we had broken it by so much in a race where it was truly us against the clock.

CK: What was said on the finish line, between you two?

CD: After the obvious catching of breath, it was the astonishment of breaking the BC record and congratulating each other on that. Then it moved towards the honour of racing each other and performing so well and how it would be a race we would never forget.

CK: What sports did you play growing up in Vancouver?

CD: I played quite a few sports such as mountain biking, skiing, baseball, swimming, and soccer. However, as I became more competitive in running I stopped playing some of them. Soccer was the only one I continued to play all the way through high school.

CK: Which was your primary position?

CK: Do you get a chance to take advantage of the North Shore Mountains for some skiing or boarding?

CD: During the winter, I occasionally go skiing with friends on Grouse Mountain but that doesn’t happen very often because of training and recovery and school.

CK: Any runners that you are a big fan of?

CD: Justyn Knight, Grant Fisher, Mohammed Ahmed, Mathew Centrowitz and Evan Jäger are a few athletes that I like.

CK: Nothing wrong with that group of names. Were you recruited by NCAA schools? If so, what was the catalyst in making the decision to stay home?

CD: NCAA schools were an option when considering universities. However, I came to the conclusion that I could get a similar level of competitiveness in training with a very talented team and UBC ticked every other box on my checklist in terms of universities. Additionally, Laurier Primeau had the foresight to see past my times at that stage and was confident in my potential. His belief in me strongly influenced my decision.

CK: Are you a fan of cross-country? Which do you prefer between indoors, outdoor and cross?

CD: I do love running cross-country because it is a completely different style of racing when compared to track however if I had to pick between cross, indoors and outdoors, outdoors would come out on top.

CK: Outdoors being your favourite of the three disciplines, while I am not sure which is Dozzi’s favourite, but he seems to be a cross-country phenom, perhaps you two can be complimentary in training, have you talked about that?

CD: Yes we have discussed the exciting premise of us training together. Combining both our talents throughout the year will hopefully yield some fantastic results.

CK: It is interesting that you and Dozzi, going 1-2 at provincials are both going to UBC and will be roommates. He is there for the proximity to Terrace, BC and the engineering program as well as Laurier Primeau and his team of coaches, how about yourself?

CD: When I was exploring my options in terms of universities, I was looking for two major components: a high level of academics and a strong track and field and cross-country team. UBC meets both of those requirements and then some. I will be studying within the Faculty of Sciences and believe that the education there will give me a broad range of opportunities in the future. Additionally, the team has a great new head coach in Laurier Primeau.

The fit is awesome since I had already met and got along well with some of the guys and obviously it is a bonus for the campus to be in such a beautiful location as well as for it to be so close to home. In my view, it will turn out to be the strongest team in Canada and a perfect fit for me.

CK: What sort of science-based career do you see yourself getting into?

CD: I am not entirely sure right now, one of the great things about cognitive systems is that it is extremely broad and allows for flexibility in terms of work.

CK: It appears that you dropped some 10 seconds in the 1500m from April to June. Had your training changed drastically in the winter or are you just maturing into the event?

CD: At the beginning of this year’s track season I was a 3:57 1500-guy and as of last weekend I’m a 3:46.20. I don’t think my training changed drastically I just think I finally got into some faster races. I was only running championship style 1500m races towards the end of last year so my time was not an accurate representation of where my fitness was.

CK: What are your short and long-term goals? Do you do the visualization-thing of being in the Olympic final?

CD: Short-term goals consist of performing well at nationals as part of team BC, hopefully making team Canada and competing at the Pan-Am Games in Peru and going to world juniors next year in the 1500m. Long-term, the Olympic Games are definitely a goal of mine, but until then it’s just a step by step process.