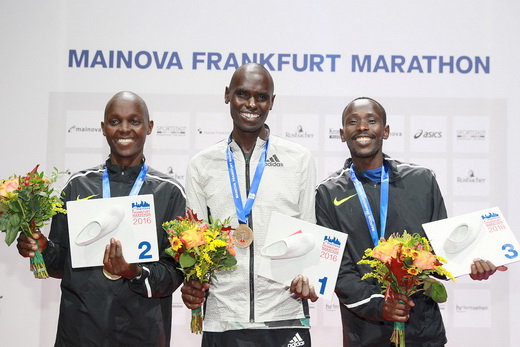 The Mainova Frankfurt Marathon on October 29 will offer round two of a contest which produced a thrilling encounter a year ago. The full set of podium finishers in the men’s race has been brought together by the organizers for a re-match. The title holder Mark Korir will race against his fellow Kenyans Martin Kosgey and Cybrian Kotut who finished second and third in 2016.

The Mainova Frankfurt Marathon is an IAAF Gold Label race with up to 15,000 runners. Online entry is still available at: www.frankfurt-marathon.com

“On 29 in Frankfurt it will be a case of: Game on, everyone starts level,“ said the race director Jo Schindler and added: “It’s very unusual to be able to re-unite the entire podium on the start line, one year on. It’s given us the chance to assemble what should be a fascinating contest.”

Mark Korir has won a significant marathon title in each of the past two years. In 2015 he triumphed in Paris with what remains his personal best of 2:05:49 and a year later won the Frankfurt title in 2:06:48. The 32-year-old returns to the race beside the River Main with a strong marathon already under his belt this spring when he finished third in Seoul with a high class run of 2:06:05. But the Kenyan is still without a victory in 2017, though he is confident of running under 2:05 one day.

Martin Kosgey sprang a surprise in the 2016 edition of the Mainova Frankfurt Marathon by finishing second with a big improvement on his personal best. He went into the race with a lifetime best of 2:09:50 and emerged as Mark Korir’s toughest opponent, crossing the line in the Festhalle in 2:07:22. He is intent upon making further inroads on his best time on the fast Frankfurt course.

Cybrian Kotut has marathon running in his blood. The 25-year-old is the younger brother by 14 years of the former world class runner Martin Lel, winner of three London and two New York titles. Kotut has already won an important marathon, taking Paris in 2016 with 2:07:11. He wasn’t far outside his personal best when he ran 2:07:28 for third in Frankfurt last year. Taking advice from his distinguished older brother, Kotut is another who will aim to improve still further and Frankfurt will be an ideal venue for him.

The European contingent has been strengthened with the recruitment of Henryk Szost of Poland, whose best is 2:07:39. He will join the German record holder Arne Gabius on start line. The latter ran 2:08:33 to break the national record in Frankfurt two years ago. As for Szost, he hasn’t quite matched his best form recently so, like Arne Gabius, Frankfurt will provide him with the chance to regain that level of performance.