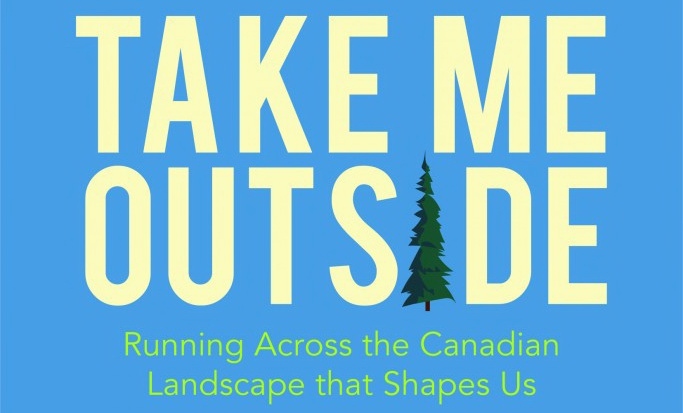 Title: Take Me Outside: Running Across the Canadian Landscape That Shapes Us

Take Me Outside: Running Across the Canadian Landscape That Shapes Us, sure, is about running across Canada, all 7200 kilometres of it from St. John’s, Newfoundland and Labrador to Victoria, British Columbia. The story though is also about the Canada that shapes us — this mosaic of cultures. Just as importantly, Take Me Outside also provides a homily that most of us need to hear: get outside.

The overarching theme is about perseverance wrapped in an adventure of crossing the nation on foot via the Trans Canada Highway. But author Colin Harris, writing from a first-person perspective, takes us through some of what makes us Canadian. The mosaic (not melting pot) informs his introspection during his passage through the ever-changing landscape. Warning, there is little talk of a certain coffee and doughnut franchise, thankfully, and even less about our national sports or beer. Much of what has shaped Canadians seems to be contained in the pieces of that national mosaic; we are a product of our environment; identities borne from our little Corner Gases or Schitt’s Creeks of the Great White North, as it were.

Harris appears to be more suited to story-telling, stewardship and leadership than he is a logistics man. He would survive in the rainforest of the Amazon by sheer will and determination, but would never survive the corporate Amazon’s warehouse and logistics team. He knows his place, it’s outside. Traversing Canada in recreational vehicles (RVs) that constantly need work, inviting support volunteers who are only able to participate on a limited basis (including one who apparently disliked the job); it is a harrowing journey of concern. Foreshadowing the potential demise of RVs, drivers and the trip as a whole makes this tale a compelling two-sitter. It’s a quick weekend read.

What is valuable for non-Canadians is the perspective of one who has lived in several towns and cities located in various provinces and territories across the nation. Harris provides a unique view into Canada and meanwhile doesn’t burden the reader with the task of deep learning. Traversing the country from east to west, gaining a front seat perspective gives a viewpoint, unlike the way the commercial schillers of hockey, beer and coffee franchises do. He doesn’t shy too far from the colonial past and our own modern ignorance or apathy towards it. Along the way, he recognises Canada’s history with the European settlers as well as the Indigenous and their unceded lands that he traverses; that we all traverse.

Athletic-wise Harris is no Al Howie, but who is? Howie crossed Canada in 72 days and 10 hours. It’s a ridiculous record that required semi-sociopathic focus and, well, beer — yes, while running and winning ultras, he drank beer.

But Harris is self-deprecating, so no one can accuse him of not being fast — he was steady. Running across Canada was a lifelong dream of his. The dream informed his life path leading up to the great trek and it informs him today in getting people outside, more through his non-profit organisation also named Take Me Outside. He and his staff are “committed to raising awareness and facilitating action on nature connection and outdoor learning in schools across Canada.”

Take Me Outside is a recommended read.