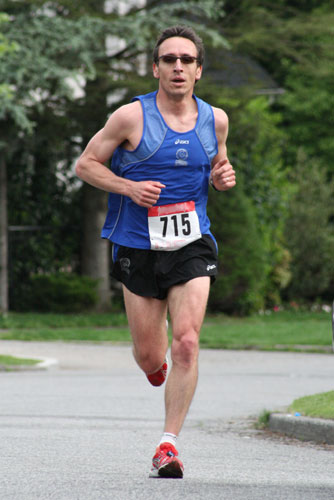 The masters (40-plus) men’s marathon category at the 2014 GoodLife Fitness Victoria Marathon should be a competitive race between three long-time BC-based distance runners. All three are Vancouver-based athletes Graeme Wilson, Jason Loutitt and Oliver Utting.

The 40-year-old Loutitt is a long-time, competitive mountain, trail and ultra-marathon runner who is competitive over the three disciplines as well as the more common 42.195 kilometre marathon. As an open runner five years ago in Seattle, he completed the marathon in the time of 2:24:37, while his half marathon best is 66:49. As a master this year he ran the BMO Vancouver Marathon in the time of 2:35:59. It will be interesting to see if the semi-nomadic Loutitt will have the road legs to finish closer to the 2:30:00 mark, he certainly possesses the endurance.

Utting, who is just one year older than Loutitt took a more typical path to competitiveness in the marathon, having raced on the track in middle distances as short as 1500m, with his personal best of 3:48.66. His 5,000m best is a solid 14:21.42 and his road 10K times have been around the 30-minute mark, however, he hasn’t run those times in several years. His marathon personal best is three minutes faster than Loutitt’s, however, was run on a faster course, so are likely similar performances. Utting ran the California International Marathon in 2:21:03. More recently in July of 2014 he ran the Knee Knackering 30 mile trail race (48K) and finished third ov

In 2012 Wilson ran two, sub-2:30 marathons, the BMO Vancouver Marathon in May and then the GoodLife Fitness Victoria Marat

hon. During 2014 Wilson started running ultra-marathons with the Knee Knackering 30-mile, where he finished eight minutes ahead of Utting and second overall and first master. In May he finished fifth overall in the Iron Knee 24-kilometre race. Wilson started running later in life and focused primarily on the roads racking up several sub-2:30 marathons and 30-minute 10Ks. He may be the freshest in terms of lifetime of running, but like Loutitt, it remains if he possesses the road legs to run to the best of his ability in the marathon.

Although this race should be very competitive, the order of finish between these three will be Wilson, Utting then Loutitt in just over 2:30:00 to 2:35:00, if the weather does not play an influential part in their performances.