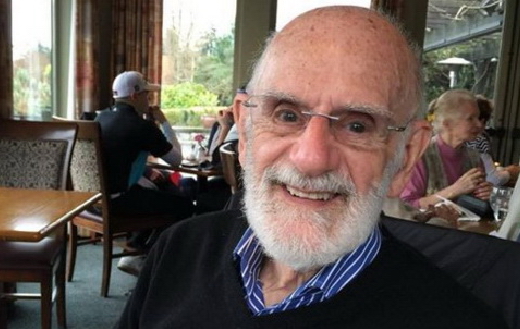 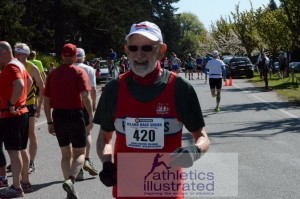 On October 11, 2015, Victoria’s John Woodall broke the single-age world record for the 8K distance road race. He finished in the time of 45:41. The performance is officially certified by the Association of Road Racing Statisticians (ARRS).

It was earlier reported that Woodall broke the record during the 2016 Prairie Inn Harriers Pioneer 8K road race on Sunday, January 10th, in the time of 48:40. “I am happy to have the faster time reported on the ARRS site,” said Woodall.

During the Pioneer 8K, he finished 431st out of 524 runners. All but one of the runners behind him was younger.

Asked how it feels to take a world record Woodall said, “It is a completely overwhelming sensation, especially at my age and considering the many years I have been running.”

Woodall is in good company. Fellow club-mates include the likes of Natasha Wodak, who owns the national 10,000-metre record with her 31:41.59 from the 2015 Payton Jordan Invitational as well as the national 8K record of 25:28, which she set on the Pioneer 8K course in 2013. There is also Maurice Tarrant who owns many national and world age-group records starting from the 60-64 age-group and throughout the decades to 80-84. There are also, two-time Olympian Bruce Deacon and 19-time Canadian Champion Lucy Smith to name just a few.

Earlier Woodall thinking that his world record came from his 48:40 performance in January, he said, “The fact that I ran the ‘World Single Age Record’ at the age of eighty-three in my own club’s race, on home turf, surrounded by many people that I know made it very special.”

He received a standing ovation from several hundred fellow runners at the awards ceremony.

The Pioneer 8K is the first road race of the year in Canada and is the first event in two different race series including the BC Super Series and the Vancouver Island Race Series. The GoodLife Fitness Victoria 8K is a part of the GoodLife Fitness Victoria Marathon weekend, which includes a half marathon, marathon and kid’s run. The race takes place on Canadian Thanksgiving weekend on the first weekend of October each year. The 2015 edition was the 33rd running.

The Prairie Inn Harriers 8K complete its 37th running this year. It is the first road race in Canada each year and is the first race of the Vancouver Island Race Series and the BC Super Series.